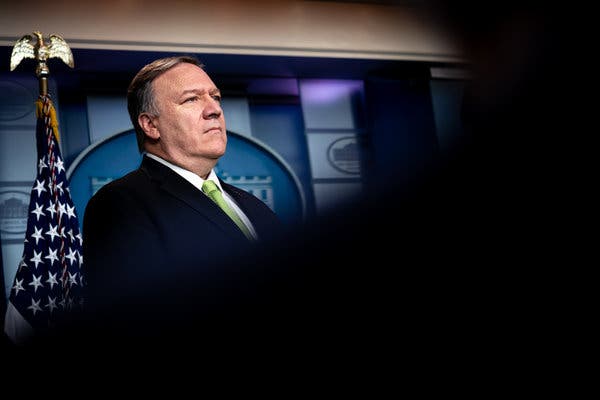 ""Over 10 days, officials have struggled to rationalize the decision that risked a war with Iran.

Since the Jan. 3 drone strike that killed Qassim Suleimani, Iran’s most important general, the Trump administration has offered shifting rationales for the attack. Here are some of the administration’s evolving justifications.

The “decision to eliminate Soleimani” was “in response to imminent threats to American lives.”

General Suleimani, the head of Iran’s elite security and intelligence forces, was deemed responsible for the deaths of hundreds of American troops in Iraq. Neither President George W. Bush nor President Barack Obama ordered him killed, judging that such a move would could lead to war in Iran.

Later in the morning, appearing on CNN, Mr. Pompeo elaborated on the administration’s justification for the strike, saying that General Suleimani “was actively plotting in the region to take actions, a big action as he described it, that would have put dozens if not hundreds of American lives at risk.”

This action would have taken place “not just in Iraq,” he added. “It was throughout the region.”

The question facing the Trump administration was, what was different now about General Suleimani’s plans that necessitated risking war with Iran? Since the strike against the Iranian general, administration officials have struggled to answer that question.

“Suleimani was plotting imminent and sinister attacks on American diplomats and military personnel, but we caught him in the act.”

— President Trump, in remarks to reporters

The president joined in the description of the attack as “imminent,” and against the backdrop of a public worried about an imminent shooting war with Iran, he insisted: “We took action last night to stop a war. We did not take action to start a war.”

But launching a drone strike against a military commander of a sovereign state is a lot different than launching a strike against a stateless terrorist leader. The administration took the action without consulting Congress. Now Democrats in the House and the Senate, along with some Republicans, demanded a justification for the strike, and a description of the “imminent” attack.

“It’s never one thing. … It’s a collective. It’s a full situational awareness of risk and analysis.”

Mr. Pompeo played down the importance of an “imminent attack” in the decision to kill General Suleimani, despite the fact that the Trump administration had been highlighting a specific threat for days since the strike on General Suleimani.

— Gen. Mark A. Milley, the chairman of the Joint Chiefs of Staff, in remarks to reporters

General Milley was more specific than other administration officials when pressed on what “imminent” attacks meant. But other military and intelligence officials disputed his timeline and said General Suleimani had not yet received permission from Iran’s supreme leader to carry out an attack.

“If you’re looking for imminence, you need look no further than the days that led up to the strike that was taken against Suleimani.”

— Mr. Pompeo, in a news conference

Mr. Pompeo, referring to a rocket attack by an Iranian-backed militia that led to the death of an American contractor in Iraq, further emphasized previous actions connected to Suleimani in justifying the strike, conflating them with the “imminent threats” he presented.

The administration continued to make emphatic but vague assertions of intelligence indicating an imminent threat by General Suleimani. General Milley would later tell reporters that not taking forceful action to stop the imminent attack would be a dereliction of duty. But officials still did not describe the threat in detail.

“We caught a total monster and we took him out. … We did it because they were looking to blow up our embassy.”


— Mr. Trump, in a news conference

Mr. Trump made his first remarks identifying a specific threat against a specific target in the region: the American Embassy in Baghdad.

But later in the news conference, Mr. Trump appeared to conflate the suggested threat of bombing the embassy with protesters who had broken into the embassy compound at the time.

“If you look at those protesters, they were rough warriors. They were Iranian-backed,” Mr. Trump said. “Had they gotten through, I believe we would have either had a hostage situation or we would’ve had a, worse, we would’ve had a lot of people killed.”

Mr. Trump’s assertions came on the same day that his own officials were still refusing to go into detail with members of Congress during briefings on Capitol Hill. Defense officials say that their hands were tied because the intelligence was classified. Disclosing it, they said, could compromise intelligence sources.

Mr. Pompeo raised further questions about the “imminent attack” General Suleimani was planning when he said the United States did not have specific intelligence on where or when an attack would take place.

“Those are completely consistent thoughts. … This was going to happen. And American lives were at risk.”

— Mr. Pompeo, in a news conference

Mr. Pompeo was insisting that the attacks were still “imminent” even though the United States did not know specifically where or when they would take place.

There appeared to be a disconnect at this point between Trump administration officials and skeptics. The officials insisted that the threats were imminent but gave no specifics. Skeptics pointed to the Iraq war, when the Bush administration’s claim that Saddam Hussein was harboring weapons of mass destruction turned out to be untrue.

Mr. Trump asserted without evidence that four American embassies, not just the one in Baghdad, had been targeted by General Suleimani.

“I didn’t see one with regard to four embassies. I share the president’s view that probably — my expectation was they were going to go after our embassies.”

Mr. Esper appeared to contradict Mr. Trump, saying that he never saw any specific piece of evidence that Iran was planning an attack on four American embassies.

In another interview on CNN’s “State of the Union,” Mr. Esper declined to answer the same question, saying that he was “not going to discuss intelligence matters here on the show.”

The Trump Administration’s Fluctuating Explanations for the Suleimani Strike - The New York Times
Posted by John H Armwood II at 8:09 AM