American Oligarchs review: Trump, Kushner and the melding of money and power | US news | The Guardian 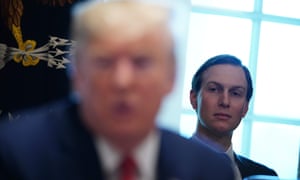 "America’s cold civil war rages, impeachment inches ahead and Donald Trump remains a focal point of conflict. As for Jared Kushner, the president’s son-in-law, he is markedly more unpopular than his wife, her father or her gun-toting brother. Donald Trump Jr and Ivanka Trump are rated among the top Republican contenders for 2024.

And yet with no sign of Steve Bannon’s imminent return, Charlie Kushner’s son will be calling the shots in the Trump re-election effort. For the elder Kushner it must be a highly satisfying moment. Little more than a decade ago, he was doing time in federal prison for “one of the most loathsome, disgusting crimes” a US attorney named Chris Christie had ever prosecuted.

Into the scrum jumps Andrea Bernstein, with a meticulous deep dive into all things Trump and Kushner. A veteran investigative reporter with WNYC radio, NPR’s New York affiliate, Bernstein brings a keen eye for financial flimflam and the tectonics that buffet American politics.

Under the subtitle The Kushners, the Trumps, and the Marriage of Money and Power, the author seeks to place the ascent of both families within the context of increased social stratification and growing inequality. Not surprisingly, the book is laden with original reporting and primary sources.

Over the past three years, Bernstein has broken stories concerning Paul Manafort and money laundering, Michael Cohen’s business dealings and Rudy Giuliani’s overseas adventures. She has also shed light on how Ivanka and Don Jr escaped prosecution after peddling Trump Soho, a residential hotel in lower Manhattan that screamed scam. Like Trump University, there was far less to the project than touted or met the eye.

Fittingly, American Oligarchs is peppered with references to Wayne Barrett, the late and legendary Village Voice reporter who penned definitive biographies of Trump and Giuliani. Back in the day, Barrett uncovered Giuliani’s father’s sojourn at the Sing Sing correctional institution in upstate New York, for armed robbery.

Most notably, American Oligarchs lays bare the circumstances surrounding the Kushners’ post-Holocaust entry into the US. According to Bernstein, members of the Kushner family appear to have committed immigration fraud.

Bernstein exhumes the oral history Rae Kushner, Jared’s paternal grandmother, left with the Hebrew Immigrant Aid Society (Hias), a non-government organization that prides itself on “helping refugees rebuild their lives in safety and dignity” and which was an object of obsession for the Pittsburgh synagogue gunman.

Ironically, Jared Kushner is now tasked with building Trump’s long-promised wall along the US-Mexico border. For the record, almost all of the 100 miles of new fencing completed on Trump’s watch is simply “replacement barrier”, according to US Customs and Border Protection, a reality at odds with the reputation of the Trumps and the Kushners for building.

As spelled out in American Oligarchs, Yossel Berkowitz, Rae’s husband and Jared’s paternal grandfather, made his wife’s last name his own and sought to pass himself off as the son of his father-in-law. Apparently, immigration officials took a kinder view of fathers and sons than of sons-in-law.

Bernstein writes of how Yossel Berkowitz morphed into Joseph Kushner, how his son Charles would be “called Charles Kushner, not Charles Berkowitz, and his grandson was Jared Kushner, not Jared Berkowitz”. For good measure, Bernstein notes that “Jared’s wife’s married name would be Ivanka Kushner, not Ivanka Berkowitz”.

Right on cue, there is a tweet for the occasion. Per Trump in 2013: “If Jon Stewart is so above it all [and] legit, why did he change his name from Jonathan Leibowitz?

As it also happens, Melania Trump later obtained a green card after touting herself as a model of “extraordinary ability”, then sponsored her Slovenian parents for US citizenship. As Faye Dunaway and Jack Nicholson remind us in Chinatown, family relationships can get complicated.

Indeed, in a June 2019 interview for Axios on HBO, Jonathan Swan pressed Jared on how he justified the administration’s restrictions on refugee admissions given his own family’s experience. He responded: “It doesn’t make a difference one way or the other.”

He added: “In the scheme of the magnitude of the problem we have, I think that we’re doing our best to try to make as much impact to allow refugees to be able to go back to their places.” So much for introspection.

At times, Bernstein’s sentiments color her indictment. While she excoriates Jared, the fact is the US immigrant population is nearing a record high, almost 14%; more than 44 million people living in the US were born elsewhere; and the fertility rate is at a 40-year low.

Like it or not, immigration remains a priority among Republicans. Said differently, as the US senators Elizabeth Warren and Bernie Sanders argue for decriminalizing illegal border crossings, it is a safe bet the anxieties and resentments that powered Trump’s electoral college victory will remain potent through November.

Bernstein also does justice to Trump’s investments, his brushes with the law and the near-prosecution of his children by the Manhattan district attorney, Cyrus Vance Jr. On that score, American Oligarchs picks up where Bernstein’s earlier reporting left off.

In October 2017, Bernstein and others wrote in the New Yorker of how Trump deployed Marc Kasowitz, his lawyer, to squelch an investigation into his children’s roles in purportedly misrepresenting the financial status of Trump Soho.

Also spearheading that ill-fated business endeavor were Felix Sater, a convicted felon, and Tevfik Arif, a Kazakh-born real estate developer who spent 17 years working in the Soviet ministry of commerce.

American Oligarchs builds upon a previously reported incriminating email chain involving the Trump children. According to one interviewee, there was “no doubt” they had “approved, knew of, agreed to, and intentionally inflated the numbers to make more sales”.

Said another: “It couldn’t have been more clear they lied about the sales and knew they were lying.”

Still, the Trumps and the Kushners won their bets with history. Both clans are sitting on top of the world – as Bernstein does her best to remind us."

American Oligarchs review: Trump, Kushner and the melding of money and power | US news | The Guardian
Posted by John H Armwood II at 8:00 AM