Trump, Impeached in Washington, Is Defended by Putin in Moscow - The New York Times 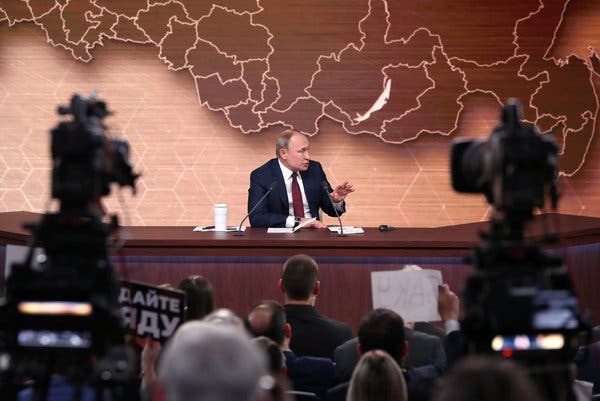 "LOL, this was expected.  Putin cares about his puppy dog Trump.

"Trump, Impeached in Washington, Is Defended by Putin in Moscow

Echoing Republican talking points, the Russian president mocked the moves against his U.S. counterpart as a baseless bid by Democrats to reverse their 2016 defeat.

He also took up Mr. Trump’s argument that there was no solid evidence to justify his removal from office. Offering an analysis of American political dynamics, Mr. Putin said that Mr. Trump was unlikely to be removed for “highly speculative reasons” by the Republican-controlled Senate.

“This is nothing but a continuation of an internal political struggle, with the party that lost the election, the Democratic Party, trying to reach its goal by different means,” Mr. Putin said during the 15th edition of a news conference that has often tended to be more a carnival of flattery.

As in the past, Mr. Putin focused on domestic affairs, answering questions about garbage collection, airfares to the Russian Far East, doctors’ salaries and many other, often highly local issues. But he used a question from Dimitri K. Simes, a Russian-born American expert on Russia, to riff about American politics and to take another swipe at accusations that Moscow had interfered in the 2016 presidential election.

Subscribe for original insights, commentary and discussions on the major news stories of the week, from columnists Max Fisher and Amanda Taub.

United States intelligence agencies declared in January 2017 that Mr. Putin had personally ordered an “influence campaign” to tilt the election in Mr. Trump’s favor, an assessment that both Mr. Putin and Mr. Trump have rejected.

“First they accuse Trump of a collusion with Russia, then it turns out there was no collusion so this cannot be used as a basis for impeachment,” Mr. Putin said. “Now they’ve come up with the idea he put pressure on Ukraine.”

Those comments echo another line taken by Mr. Trump and his supporters: that Democrats have been bent from the start of his presidency on finding — or, if need be, fabricating — a reason for impeachment.

The Kremlin, which rooted against Hillary Clinton in 2016, has watched Washington’s recent political battles with glee, seeing them as proof that Russia, which has not had a fair presidential election throughout Mr. Putin’s nearly 20 years in power, has chosen the right path.

Mr. Putin, whose supposedly final term in office runs out in 2024, indicated on Thursday that he might try to stay on, despite a constitutional ban on his standing for another consecutive term.

In response to a question, he suggested that a clause in the Constitution barring presidents from serving more than two terms in a row should perhaps be abolished. But he gave no clear picture of his own intentions."

Trump, Impeached in Washington, Is Defended by Putin in Moscow - The New York Times
Posted by John H Armwood II at 11:27 AM