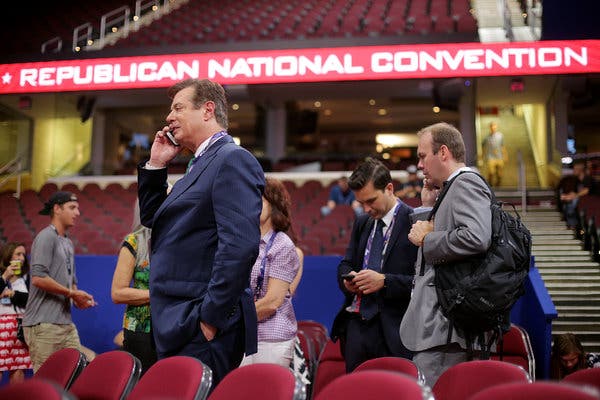 They wanted to take down Biden. But they also wanted to absolve Moscow of election meddling.

The Ukraine scandal now unfolding in congressional impeachment hearings has at its core a Shakespearean twist: President Trump, abetted by his paladins of spin, has trapped himself in an alternate universe. To undermine the well-established fact that Russia corrupted the 2016 vote to help him win, Mr. Trump and his allies have tried to build a fiction that pins those crimes on Ukraine.

In doing so, he has confirmed our darkest fears. The president’s bid to solicit foreign help to impugn a domestic political rival in 2019 should wipe away any doubts about his willingness to do the same with Russian help in 2016.

Mr. Trump and his enablers — Rudolph Giuliani foremost among them — have scrambled all year to do two deeds at once. They want to besmirch Joe Biden, without foundation, for supposedly using his office as vice president to protect his son Hunter, who served until recently on the board of a Ukrainian gas company. And they want to reinvent what happened in 2016 so as to switch the blame for the election meddling from Moscow to Kyiv.

Congress is rightly focused on the quid pro quo demands that Mr. Trump was making of the Ukrainian president, Volodymyr Zelensky, to further his own personal political interests. But the effort to rewrite the history of 2016 is no less insidious.

Agree to disagree, or disagree better? We'll help you understand the sharpest arguments on the most pressing issues of the week, from new and familiar voices.

As the founders of Fusion GPS, the research firm that commissioned the reports by the former British intelligence officer Christopher Steele that raised some of the earliest warnings of Russia’s actions, we’re willing to clear up some of the nonsense now so abundant on the right.

House Republicans like Representatives Devin Nunes and Jim Jordan seem eager to portray Fusion as co-conspirators with the Ukrainians in some devilish plot to undermine Mr. Trump’s 2016 candidacy. That could not be farther from the truth. None of the information in the so-called Steele dossier came from Ukrainian sources. Zero. And we’ve never met Serhiy Leshchenko, the Ukrainian former legislator and journalist whom Republicans want to blame for the downfall of Mr. Trump’s campaign chairman, Paul Manafort.

That said, our investigation of Donald Trump did get a great boost because of Ukraine, just not in the way Republicans imagine. We began looking into Mr. Trump’s business dealings and ties to Russia in the fall of 2015 with funding from Republicans who wanted to stop his political ascent. The Ukraine alarms went off six months later, when candidate Trump brought into his campaign none other than Mr. Manafort, a man with his own tangled history with Russian oligarchs trying to get their way in Ukraine.

It turns out we already knew a great deal about Mr. Manafort’s activities in Ukraine because we worked on several stories about his work for Russian-backed politicians eight years earlier, when we were both still writing for The Wall Street Journal. That reporting threw a spotlight on how Mr. Manafort, while representing clients involved in fierce geopolitical struggles over Ukraine, had neglected to comply with a lobbying law requiring that he register as a foreign agent — the very law, among others, to which he pleaded guilty of violating.

Those articles triggered years of media coverage exposing Mr. Manafort’s questionable lobbying activities and ties to pro-Russia oligarchs. In the meantime, we left The Journal and went on to found Fusion GPS, a research and strategic intelligence firm, in 2010.

We turned our focus back to Mr. Manafort in early 2016 and soon found a 19-page legal filing in a federal courthouse in Virginia in which one of his former clients, the Russian businessman Oleg Deripaska, accused Mr. Manafort in scorching detail of making off with tens of millions of dollars that he had promised to invest in Ukraine. The whole thing reeked of fraud and possible money laundering. It was as if Mr. Manafort had boarded the Trump campaign plane with baggage stuffed with figurative explosives. The Virginia filings later surfaced in various articles about Manafort in the national media.

A few months later we stumbled on some Ukrainian media reports noting that documents existed in Kyiv that chronicled the political spending of the pro-Russia ruling party at the time, which had hired Mr. Manafort. We wondered if his name might crop up in those papers. Someone suggested Mr. Leshchenko might be of help in the matter — a fact we stored away. To this day, we have never met him.

The New York Times got to the story first, in August 2016, reporting that a black ledger of illicit payments showed that millions of dollars had gone into the pocket of one Paul Manafort. That story led to Mr. Manafort’s ouster from the campaign, and undoubtedly fueled F.B.I. interest in his activities, though the so-called black ledger was never used in the criminal cases against him.

We’d love to take credit for finding the black ledger, but we didn’t, and any alert reporter following the Ukrainian press would have known to follow the leads that led to it.

That hasn’t stopped Republicans from weaving conspiracy theories about our work in Ukraine. Mr. Giuliani, the president’s personal lawyer and the main stirrer of the conspiracy pot in Ukraine, cooked up a fresh fabrication just this week, telling Glenn Beck on his TV program that he had “very strong evidence that a lot of the Steele dossier was produced in Ukraine” and that “Glenn Simpson spent a fair amount of time there during the time that the dossier was being written.”

By sheer coincidence, one of us — the aforementioned Mr. Simpson — found himself on a plane from New York to Washington with Mr. Giuliani just hours later, and he couldn’t resist confronting the former New York mayor about his claim after they landed.

“I understand you think I spent a lot of time in Ukraine?” Mr. Simpson inquired.

“You did spend some time in Ukraine,” Mr. Giuliani replied.

“Did I?” Mr. Simpson asked as he waved his phone in front of Mr. Giuliani, signaling that he was recording the encounter.

“What if I told you I have never been to Ukraine in my life?”

“Well,” Mr. Giuliani replied with equanimity, “O.K. I will find out if that’s true or not.”

It’s not. So, Mr. Giuliani is still investigating the lies he hopes will save a deeply corrupt presidency. That should chill all Americans."

Opinion | The Double-Barreled Dream World of Trump and His Enablers - The New York Times
Posted by John H Armwood II at 10:57 AM