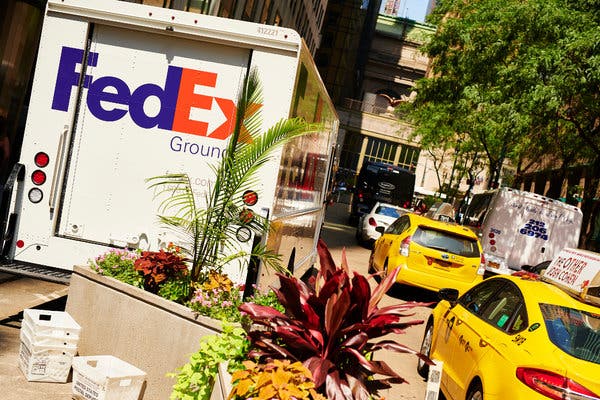 "WASHINGTON — In the 2017 fiscal year, FedEx owed more than $1.5 billion in taxes. The next year, it owed nothing. What changed was the Trump administration’s tax cut — for which the company had lobbied hard.

The public face of its lobbying effort, which included a tax proposal of its own, was FedEx’s founder and chief executive, Frederick Smith, who repeatedly took to the airwaves to champion the power of tax cuts. “If you make the United States a better place to invest, there is no question in my mind that we would see a renaissance of capital investment,” he said on an August 2017 radio show hosted by Larry Kudlow, who is now chairman of the National Economic Council.

Four months later, President Trump signed into law the $1.5 trillion tax cut that became his signature legislative achievement. FedEx reaped big savings, bringing its effective tax rate from 34 percent in fiscal year 2017 to less than zero in fiscal year 2018, meaning that, overall, the government technically owed it money. But it did not increase investment in new equipment and other assets in the fiscal year that followed, as Mr. Smith said businesses like his would.

Nearly two years after the tax law passed, the windfall to corporations like FedEx is becoming clear. A New York Times analysis of data compiled by Capital IQ shows no statistically meaningful relationship between the size of the tax cut that companies and industries received and the investments they made. If anything, the companies that received the biggest tax cuts increased their capital investment by less, on average, than companies that got smaller cuts.

Gift subscriptions to The Times. Starting at $25.

As for capital investments, the company spent less in the 2018 fiscal year than it had projected in December 2017, before the tax law passed. It spent even less in 2019. Much of its savings have gone to reward shareholders: FedEx spent more than $2 billion on stock buybacks and dividend increases in the 2019 fiscal year, up from $1.6 billion in 2018, and more than double the amount the company spent on buybacks and dividends in fiscal year 2017.

A spokesman said it was unfair to judge the effect of the tax cuts on investment by looking at year-to-year changes in the company’s capital spending plans.

“FedEx invested billions in capital items eligible for accelerated depreciation and made large contributions to our employee pension plans,” the company said in a statement. “These factors have temporarily lowered our federal income tax, which was the law’s intention to help grow G.D.P., create jobs and increase wages.”

FedEx’s use of its tax savings is representative of corporate America. Companies have already saved upward of $100 billion more on their taxes than analysts predicted when the law was passed. Companies that make up the S&P 500 index had an average effective tax rate of 18.1 percent in 2018, down from 25.9 percent in 2016, according to an analysis of securities filings. More than 200 of those companies saw their effective tax rates fall by 10 points or more. Nearly three dozen, including FedEx, saw their tax rates fall to zero or reported that tax authorities owed them money.

From the first quarter of 2018, when the law fully took effect, companies have spent nearly three times as much on additional dividends and stock buybacks, which boost a company’s stock price and market value, than on increased investment.

The law cut the corporate rate to 21 percent from 35 percent, and allowed companies to deduct the full cost of new equipment investments in the year that they make them. Those cuts stimulated the American economy in 2018, helping to push economic growth to 2.5 percent for the year and fueling a boost in hiring. Business investment rose at an 8.8 percent rate in the first quarter of 2018, and was nearly as strong in the second quarter.

But the impact dwindled quickly.

In the summer, the economy grew at just 1.9 percent and business investment fell 3 percent, including a 15.3 percent plunge in spending on factories and offices. Over the spring, companies spent less on new investments, after adjusting for inflation, than they had in the winter.

Overall business investment during Mr. Trump’s tenure has now grown more slowly since the tax cuts were passed than before.

Some conservative economists and business leaders say the effects of the tax cuts were undercut by uncertainty from Mr. Trump’s trade war, which is slowing global growth and prompting companies to freeze projects. Other economists say the fizzle is predictable because high tax rates were not holding back investment.

“It did provide a short-term boost, but it wasn’t the big response that many people expected,” said Aparna Mathur, an economist at the conservative American Enterprise Institute, who recently concluded that the 2017 law has not meaningfully changed investment patterns in America.

Mr. Smith, 75, a former Marine who built FedEx from a small package delivery service into a global logistics giant, was no stranger to pressing for lower taxes. He tried, without success, to get President Barack Obama to cut the corporate rate. But with Mr. Trump’s ascension, the corporate chief began a one-man campaign to convince Washington that now was the moment. He met with the president-elect at Trump Tower on Nov. 17, just days after the election, and appeared alongside the president at official events.

Mr. Smith teamed up with his competitor, David Abney, the chairman and chief executive of UPS, to push for a tax overhaul, including jointly writing an op-ed in The Wall Street Journal.

“Fred and I even jointly had some meetings about this with key people, and we were both pushing pretty hard,” Mr. Abney said in a recent interview.

FedEx spent $10 million on lobbying in 2017, in line with previous spending, with much of it focused on tax issues, according to federal records. Its team pushed hard to shape the bill behind the scenes, meeting regularly with House and Senate committee staff who were writing the provisions.

Mr. Smith met with Mr. Trump and Vice President Mike Pence in February 2017, and on May 26 he spoke on the phone with Steven Mnuchin, the Treasury secretary, according to Mr. Mnuchin’s public calendar.

Eight months after Congress passed the law, Mr. Trump celebrated the tax cuts by hosting Mr. Smith and other business leaders at a dinner at his Bedminster, N.J., golf club. He singled out Mr. Smith several times, bantering with him about a term paper that Mr. Smith had written while a student at Yale. The paper formed the basis for the creation of FedEx.

The next week, Mr. Smith boasted of his company’s influence on the law in the company’s annual report, which noted that FedEx is “investing more than $4.2 billion in our people and our network as a result of the tax act.”

The company also accelerated previously scheduled wage increases for hourly employees by six months. It gave performance-based pay to other managers and said it would invest $1.5 billion over seven years in its Indianapolis shipping hub. The company also bought 24 Boeing freight jets for $6.6 billion, a purchase officials say would not have happened without tax cuts.

But the company ended its 2018 fiscal year having spent $240 million less on capital investments than it predicted it would in December 2017, shortly before the tax cuts passed. The company’s capital spending declined by nearly $175 million in fiscal 2019.

This year, the company cut back employee bonuses and has offered buyouts in an effort to reduce labor costs in the face of slowing global growth. The company has also added to its pension fund, a move that carried the benefit of reducing its tax liability even further.

FedEx reduced its tax liability in part by taking advantage of a provision in the law that allowed companies to immediately deduct the value of any capital investments they make in a given year. But its biggest gains were from the cut in the corporate rate. FedEx had been carrying a large amount of future tax liabilities on its balance sheet — and when the corporate rate fell to 21 percent, those liabilities shrank too.

“Something like $1.5 billion in future taxes that they had promised to pay, just vanished,” said Matthew Gardner, an analyst at the liberal Institute on Taxation and Economic Policy in Washington. “The obvious question is whether you can draw any line, any connection between the tax breaks they’re getting, ostensibly designed to encourage capital expenditures, and what they’re actually doing. And it’s just impossible to know.”