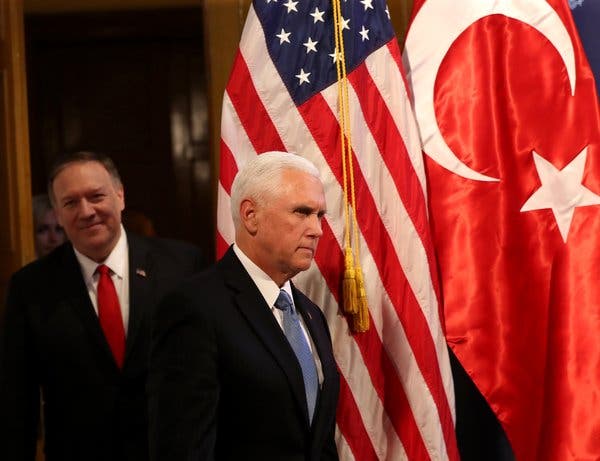 "President Trump’s decision to withdraw 1,000 American troops from Syria without consulting any aides, experts or allies, and without any warning to America’s Kurdish comrades in arms, whom he placed in mortal danger, has provided chilling evidence of the danger posed by his chronic inability to appreciate a president’s responsibilities.


Mr. Trump, as he always does, claimed a huge victory — “an amazing outcome” that saved “millions and millions of lives.” That scores of Kurdish lives have already been lost, that thousands of people have fled their homes, that a swarm of Islamic State followers escaped from internment camps, that the Kurds themselves turned for help to the mass murderer Bashar al-Assad, that America’s dwindling credibility in the world was further undermined, meant nothing to the president. “It’s not our border,” he said on Wednesday.
Mr. Trump’s apologists, too, have been quick to marshal a defense — the Middle East is full of horrible dictatorships, conflicts and crimes against humanity, and presidents before had longed to pull America out of what Mr. Trump has called the region’s “endless, senseless wars.” In northern Syria, the Americans were trapped between two allies, the Kurds who fought with them on the ground and the Turks, whose country is a NATO ally and repository of American tactical nuclear weapons. Something eventually had to give. There was a serious case to be made for pulling out.
But not like this.
The acute shame of the moment was captured in two reports this week. The first was a video of a Russian-speaking reporter wandering through a hurriedly abandoned American base in northern Syria, rummaging among the Coca-Cola cans and footballs. The second arrived with news that two United States Air Force F-15 jets had destroyed an American munitions bunker in Syria to prevent munitions and other equipment from falling into the hands of other armed groups.
It is not unusual for the United States to demolish its own bases before departing a battlefield. It has done so in Afghanistan and Iraq. But that work is normally done by bulldozers or explosives in a calm, orderly way, not with last-minute airstrikes. And the Americans did not just leave behind munitions — in the heads of all those Kurdish fighters are the tactics, training and procedures of the American Special Forces personnel they fought alongside.
The betrayal was agonizing. The Kurds are the world’s lost nation, their lands divided among five Middle Eastern countries that treat them as dangerous interlopers. They thought they had found a protector in the United States — Kurds in Iraq had been America’s allies, and those in Syria carried the brunt of the fight against the Islamic State. But then, casually in an Oct. 6 call with President Recep Tayyip Erdogan of Turkey, Mr. Trump abruptly sold them out, while also making an unexpected and unwarranted gift not only to Mr. Erdogan, who regards the Syrian Kurds as mortal enemies, but also to Mr. Assad and his patrons, the Russians and Iranians.
If any more evidence is required, there’s that impossibly puerile follow-up letter to Mr. Erdogan, with the casual threat to destroy the Turkish economy and the chatty advice — “Don’t be a tough guy. Don’t be a fool!” — which the Turkish president’s office confirmed Mr. Erdogan promptly dumped in a trash can.
Senator Mark Warner, Democrat of Virginia, has proposed legislation to fast-track visas to the United States for the translators and other Syrian Kurds who served alongside American forces in the fight against the Islamic State. Congress should pass such a bill expediently.
It was heartening, at least, that many Republican lawmakers were sufficiently horrified by Mr. Trump’s betrayal of the Kurds to condemn it in the House of Representatives, in a resolution that passed 354 to 60. The Senate has been preparing its own legislation, although no vote has been scheduled. Senator Lindsey Graham, who had harshly criticized Mr. Trump for giving a green light to Turkey to invade Syria, backtracked on Thursday, saying he would work with the president “to build upon this breakthrough.”
It was left to Secretary of State Mike Pompeo and Vice President Mike Pence to do urgent damage control in Ankara, Turkey, and, after close to five hours of talks on Thursday, Mr. Pence solemnly announced that Mr. Erdogan had agreed to a five-day cease-fire in his offensive in northern Syria. But Turkey’s foreign minister, Mevlut Cavusoglu, immediately said that the deal was not a cease-fire at all, but merely a “pause for our operation.” He added, “we got what we wanted.” As did Russia and Iran."