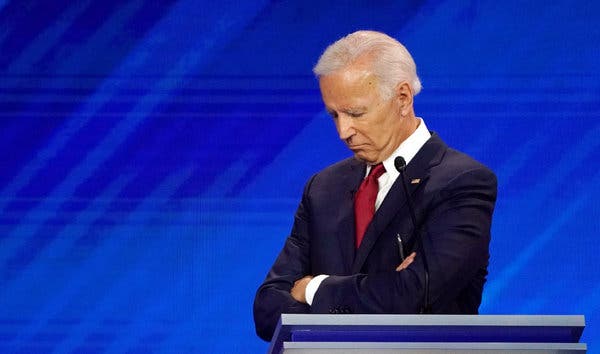 Charles Blow nails it.  It is time for Black folks to wake up and move on.

All five of these things are simultaneously true:

Joe Biden is the Democratic front-runner and may well be the nominee.

He is by far the favorite candidate among black voters.

He was a loyal vice president to Barack Obama, and the two men seem to have shared a deep and true friendship.

He, like the other Democratic candidates, would be a vast improvement over Donald Trump.

And, Biden’s positioning on racial issues has been problematic.

This issue exposed itself again Thursday during the presidential debate in Houston. Moderator Linsey Davis put a question to Biden:

You said that some 40 years ago. But as you stand here tonight, what responsibility do you think that Americans need to take to repair the legacy of slavery in our country?”

Biden could have taken responsibility for his comments and addressed the question directly, but he didn’t. Instead, he gave a rambling, nonsensical answer that included a reference to a record player. But, the response ended in yet another racial offense in which he seemed to suggest that black people lack the natural capacity to be good parents:

We bring social workers into homes and parents to help them deal with how to raise their children. It’s not that they don’t want to help. They don’t — they don’t know quite what to do. Play the radio, make sure the television — excuse me, make sure you have the record player on at night, the — the — make sure that kids hear words. A kid coming from a very poor school — a very poor background will hear four million words fewer spoken by the time they get there.

His language belies a particular mind-set, one of a liberal of a particular vintage. On the issue of race, it is paternalistic and it pities, it sees deficiency in much the same way that the conservative does, but it responds as savior rather than with savagery. Better the former than the latter, surely, but the sensibility underlying the two positions is shockingly similar. It underscores that liberalism does not perfectly align with racial egalitarianism, regardless of rhetoric to the contrary.

On Sunday, Biden made a speech on race in Birmingham commemorating the 1963 bombing at the 16th Street Baptist Church, in which he said on the issue of how racism and racial hatred affect black people:

“We know we’re not there yet. No one knows it better. My mom used to have an expression, ‘You want to understand me, walk in my shoes a mile.’ Those of us who are white try, but we can never fully, fully understand. No matter how hard we try. We’re almost, we’re almost at this next phase of progress in my view.”

Progress. That is the wall behind which white America hides, including white liberals. (Even many black leaders have absorbed and regurgitate the progress narrative.) It expects black people to swell and applaud at their effort. But, how is that a fair and legitimate expectation? Slavery, white supremacy and racism, are horrid, man-made constructs that should never have existed in the first place. Am I supposed to cheer the slow, creeping, centuries-long undoing of a thing that should never have been done?

Malcolm X was once asked if he felt that we were making progress in the country. He responded: “No. I will never say that progress is being made. If you stick a knife in my back nine inches and pull it out six inches, there’s no progress. If you pull it all the way out, that’s not progress. The progress is healing the wound that the blow made.”

I don’t even think that’s progress. That just returns the situation to a common baseline before the crime was committed.

Furthermore, it’s not what Biden says in prepared remarks that’s problematic, it’s what he says off the cuff and under pressure that to me reveal an antiquated view on racial matters and racial sensitivities.

It was the way he advocated for the 1994 crime bill, a bill that contributed to America’s surging mass incarceration, which disproportionately affected black and brown people in this country.

The bill did some good, but the harm it did cannot be overlooked or understated. Rather than fully owning up to to the disastrous aspects of the bill, Biden has over the years bragged about it and defended it.

It was in the way he described then-candidate Barack Obama in 2007 as an African-American who was “articulate and bright and clean.” Clean? As opposed to what?

This critique of Biden isn’t personal. I bear no ill will for the man. But, a fact is a fact, and no amount of growth, change or well-intentioned good-heartedness has the ability to erase it."

Opinion | Joe Biden Is Problematic
Posted by John H Armwood II at 11:17 AM