The El Paso Screed, and the Racist Doctrine Behind It 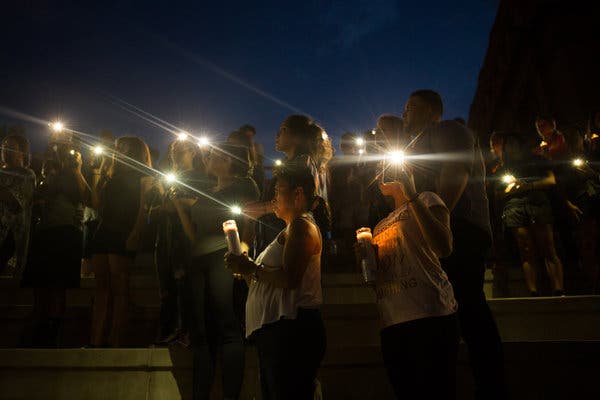 "From Pittsburgh to Christchurch, and now El Paso, white men accused of carrying out deadly mass shootings have cited the same paranoid fear: the extinction of the white race.

The threat of the “great replacement,” or the idea that white people will be replaced by people of color, was cited directly in the four-page screed written by the man arrested in the killing of 22 people in El Paso over the weekend.

The phrase was coined in 2012 by the French author Renaud Camus, whose writing on white genocide echoes at least a century of white supremacist views. But some experts now fear the doctrine of replacement is being embraced more readily by lone wolf white terrorists and even some politicians, producing a particularly dangerous climate.

“These series of shootings all have an element of fear and anxiety created by this concept of being replaced,” said Oren Segal, the director of the Anti-Defamation League’s Center on Extremism. “When you think your race is going to go extinct, you will do anything to protect that.”

A spotlight on the people reshaping our politics. A conversation with voters across the country. And a guiding hand through the endless news cycle, telling you what you really need to know.

Mr. Camus has sought to distance himself from white supremacists, writing in an email to The New York Times that nonviolence was central to his philosophy. Yet he did not shy away from saying he believed that people of white European descent were at risk of being wiped out by immigrants and people of color. If white supremacists held those views, “Good for them,” he wrote. “That is indeed my belief.”

The shooting in the immigrant-rich town of El Paso on Saturday was among the deadliest attacks in the United States motivated by white extremism since the 1995 Oklahoma City bombing that killed 168 people, according to the A.D.L. About 56 percent of the extremist murders committed in the United States over the past decade were carried out by people espousing white supremacist ideology such as the great replacement, A.D.L. research shows.

Mr. Camus disputed his role in inspiring the accused El Paso gunman, whose screed, posted online minutes before the massacre, said the attack was the result of a “Hispanic invasion of Texas.” Mr. Camus also denied influencing the man accused of killing 51 people in the mosque shootings in Christchurch, New Zealand, who wrote a document using the same title as Mr. Camus’s book, “The Great Replacement,” before the vicious attack was carried out.

During a march in Charlottesville, Va., in 2017, white supremacists yelled, “Jews will not replace us,” while carrying tiki torches.Edu Bayer for The New York Times

[“It feels like being hunted: The El Paso attack has left many Latinos deeply shaken, raising questions about their place in American society.]

Mr. Camus questioned whether either gunman could have read his book because it has not been translated into English, he said. The themes however have been repeated on far-right websites and by right-wing pundits.

Analysts say Mr. Camus’s writing — and the idea of a great replacement — has undoubtedly influenced the conversation among American white nationalists. The ideas espoused in the great replacement build on the most popular white supremacist talking point — the false notion that white people are at risk of genocide, said Heidi Beirich, the director of the Intelligence Project at the Southern Poverty Law Center.

That is a shift in the narrative from 20 years ago, she said, when white supremacists mostly talked about their superiority as a race. Now, their discussions center on a belief that they are the victims of nonwhite invasions, Ms. Beirich said.

“If you’re getting invaded, what do you need to do?” she asked, explaining the logic of white supremacists. “You need to repel the invaders.”

People who have that mind-set — fueled by the belief that violently defending the white race is not only heroic but rational — can be particularly lethal in this moment, experts said.

“White nationalism isn’t new, but what we need to recognize is that from Charlottesville to Pittsburgh to Poway to El Paso, these aren’t outliers on a scatter plot,” said Jonathan Greenblatt, the chief executive of the Anti-Defamation League. “These are data points on a trend line. And that’s a trend line that indicates clearly and unambiguously that white supremacy is a global threat.”

The funeral for Joyce Fienberg, one of the 11 victims killed at the Tree of Life synagogue in Pittsburgh.Hilary Swift for The New York Times

Replacement theory also perpetuates the false and anti-Semitic view that the end of the white race is part of a Jewish conspiracy.

During a march in Charlottesville two summers ago, white supremacists yelled, “Jews will not replace us,” while carrying tiki torches. The following day, one of them killed a woman when he rammed his car into a crowd of counterprotesters.

In April, a gunman entered a synagogue in Poway, Calif., and began shooting. Authorities believe the gunman posted a manifesto riddled with anti-Semitic, racist slurs before the attack. Like the El Paso document, the screed declared support for the shooting in Christchurch and warned of the great replacement.

“It is the conspiracy theory du jour that they use to make sense of the world and justify their racist, xenophobic, anti-Semitic worldview,” Mr. Greenblatt said.

Representative Steve King of Iowa espoused replacement-theory talking points in an interview with a far-right Austrian publication last year. President Trump has repeatedly referred to an “invasion” of migrants into the country. And his idea for a border wall is the kind of thing that excites replacement-theory adherents, said Jeff Schoep, a former leader of a neo-Nazi organization.

“It’s probably one of the greatest fears that people in the movement have, is basically being replaced,” said Mr. Schoep, who says he now denounces white supremacist views.

Mr. Camus’s philosophy aligns lock-step with a tradition of white supremacist ideology that dates to Madison Grant, “the most influential racist in American history,” said Jonathan Spiro, a historian who is the chief academic officer at Castleton University.

Grant’s 1916 book, “The Passing of the Great Race,” argued that Nordics were the master race and lamented the threat posed by people who were not white. His book was a basis for the Immigration Act of 1924 that mostly limited immigration into the United States to people from Western Europe, and it inspired Adolf Hitler, who used the book as a manual for his eugenic practices, said Dr. Spiro, who wrote a biography of Grant.

Mourners attend a vigil for Lori Kaye, who was killed in Poway, Calif.Hilary Swift for The New York Times

Mr. Schoep, who is in his 40s and was the head of the National Socialist Movement, joined the white nationalist movement as a teenager. In his mind at the time, it was not about hate, he said.

“I was joining something to save my country, to save my race, to save my people,” Mr. Schoep said. “Now I feel like that talk and some of that hate is coming to a head where it’s more violent, more pronounced and people are doing terrible things.”

That rising violence, as well as experiences he has had with people of other races, led Mr. Schoep to leave the movement this past winter, he said. He now disavows white supremacist beliefs, and he hopes that he can steer other white supremacists away from the movement, he said, adding that it will not be easy.

The sense of grievance among white nationalists remains deep, and many still feel marginalized, which leads to more attacks, Mr. Schoep said.

What happened in El Paso “is exactly the type of thing that concerns me and worries me for the future,” he said. “And I don’t think it’s going to be the last one.”

For Ibram X. Kendi, a historian and director of the Antiracist Research and Policy Center at American University, that might be true, but it is not necessarily surprising.

“The United States has always been in the midst of a white nationalist terrorist crisis,” said Mr. Kendi."

The El Paso Screed, and the Racist Doctrine Behind It
Posted by John H Armwood II at 2:30 PM