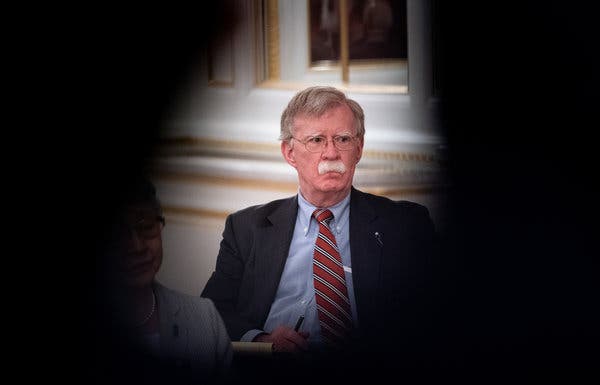 "And why should she?

Symbolic representation has its problems. You can’t fix structural inequality with a palette swap of the people in charge. The selective elevation of a lucky few isn’t a substitute for broad-based opportunity. And “skinfolk,” as the old proverb goes, aren’t always “kinfolk.”

But that doesn’t mean it lacks value. When people from historically excluded groups take the national stage, they can bring new insights, observations and experiences to otherwise cloistered spaces. By simply speaking to the conditions in which their lives are lived they can challenge consensus and unsettle conventional wisdom on issues and policies that affect their communities. No, it doesn’t always happen this way. But when it does, it is powerful.

Which brings us to Joe Biden and the second night of the Democratic presidential debates. A few weeks ago, at a fund-raiser for his campaign, the former vice president reached back to his past in the Senate to make a present-day point about civility.

“I was in a caucus with James O. Eastland,” Biden said. “He never called me boy, he always called me son.” He brought up another senator, Herman Talmadge of Georgia. “One of the meanest guys I ever knew,” he said. “Well guess what? At least there was some civility. We got things done. We didn’t agree on much of anything. We got things done. We got it finished. But today you look at the other side and you’re the enemy.”

Eastland and Talmadge were arch-segregationists, vicious racists and ardent defenders of white supremacy. Their long careers in politics were built on the systematic disenfranchisement of black Americans.

Senator Cory Booker of New Jersey, one of two African-American candidates for the Democratic nomination, issued a swift response. “Vice President Biden’s relationships with proud segregationists are the not the model of how we make America a safer and more inclusive place for black people, and for everyone.” The other African-American candidate in the presidential race, Senator Kamala Harris of California, when asked about Biden’s remarks at the Capitol, gave a brief comment. “Yes, it concerns me deeply. If those men had their way, I wouldn’t be in the United States Senate and on this elevator right now.” The next week, Harris faced Biden onstage with eight other candidates. There, she went beyond “concern”:

It was hurtful to hear you talk about the reputations of two United States senators who built their reputations and career on segregation of race in this country. And it was not only that, but you also worked with them to oppose busing. And you know, there was a little girl in California who was part of the second class to integrate her public schools and she was bussed to school every day and that little girl was me.

Biden was flustered, caught off-guard by this unexpected expression of lived experience. “Busing” helped a young Harris get a quality education at an integrated school. And while the city of Berkeley’s program was voluntary, her story isn’t unique. Imposed almost 20 years after Brown v. Board of Education, court-mandated desegregation gave a generation of black children unprecedented access to quality public schools.

[Join Jamelle Bouie as he shines a light on overlooked writing, culture and ideas from around the internet. For exclusive thoughts, photos and reading recommendations, sign up for his newsletter.]

Biden wasn’t just criticized for his nostalgia play. He was confronted with the fact that his efforts as a young senator would have ended one of the country’s few attempts to make equal treatment a reality, to give black students the kind of education that white students took for granted. And while it’s tempting to portray this as ancient history, it isn’t. Harris was born in 1964, just three months after President Lyndon Johnson signed the Civil Rights Act. Biden joined the Senate in 1973. It was 1977 when Biden introduced a bill that would, in his words, “strike at the injustice of court-ordered busing.”

There was a backlash to Harris’s comments, most of it centered on decorum. By this line of reasoning, it was unfair of Harris to bring up her experiences, to make race part of the conversation, to put Biden on trial for past positions and make more ordinary Americans feel guilty about their views on this or any other race-inflected issue. Biden, too, had a response, invoking his work with President Obama: “I know and you know, I fought my heart out to ensure that civil rights and voting rights, equal rights are enforced everywhere,” Biden told Jesse Jackson’s Rainbow PUSH Coalition convention the day after the debate.

But these objections miss the heart of Harris’s point. Biden’s relationship with Eastland and Talmadge wasn’t neutral. It occurred in the context of a national fight over desegregation. And Biden stood with a status quo that denied equal opportunity to black students, against the mandate of the Constitution. Whatever her faults as a public figure, it was good that Harris was onstage to confront Biden with what his choices meant for real people. It wasn’t the politics of “racial strife,” it was the politics of accountability. If any of it is new to the former vice president, it’s because the Senate of his era had very few people who looked like Booker and Harris — few people with any connection to the black side of America’s racial segregation.

The dispute between Joe Biden and Kamala Harris isn’t really about desegregation. It’s about innocence. Biden may have opposed this singular effort to desegregate America’s schools, but should that weigh on our view of him in 2019? Should we accept his good intentions or should we hold him — and by extension, his many contemporaries — to account for the harm he helped perpetuate?

In 1963, James Baldwin provided an answer to this question: “One can be, indeed one must strive to become, tough and philosophical concerning destruction and death, for this is what most of mankind has been best at since we have heard of man. But it is not permissible that the authors of devastation should also be innocent. It is the innocence which constitutes the crime.”