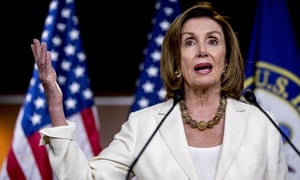 As America grows increasingly brazen in its bigotry, Pelosi should be standing up for her new colleagues – so why isn’t she?

Can progressives please shut up and listen to Nancy Pelosi? The speaker of the House, I would like to remind everyone, is a master strategist, a savvy tactician, and an experienced politician. She knows what’s best for America. And what’s best for America, apparently, isn’t standing up to Donald Trump; no, it’s ensuring four freshman congresswomen don’t get ideas above their station. It’s ensuring , in particular, knows her place.

There have been long-running tensions between Pelosi and the so-called “Squad” of new progressive congresswomen, which consists of Ocasio-Cortez, Ilhan Omar, Rashida Tlaib and Ayanna Pressley. Things escalated sharply over the weekend, when Pelosi decided it would be a good idea to demean her colleagues in the New York Times. “All these people have their public whatever and their Twitter world, but they didn’t have any following,” Pelosi told the Times, referring to a border funding bill the Squad opposed. “They’re four people, and that’s how many votes they got.”

To begin with, Pelosi’s disparaging remarks about the Squad seemed like they were probably strategic. Now, however, the sustained attacks feel increasingly personal. “When these comments first started, I kind of thought that she was keeping the progressive flank at more of an arm’s distance in order to protect more moderate members, which I understood,” Ocasio-Cortez told the Washington Post on Wednesday. “But the persistent singling out … it got to a point where it was just outright disrespectful … the explicit singling out of newly elected women of color.”

AOC expanded on her comments on Thursday, telling CNN she “absolutely” doesn’t think Pelosi is racist. “It’s really just pointing out the pattern, right? We’re not talking about just progressives, it’s signaling out four individuals. And knowing the media environment that we’re operating in, knowing the amount of death threats that we get … I think it’s just worth asking why.”

As Ocasio-Cortez notes, Pelosi’s attacks aren’t taking place in a bubble; they’re taking place in a media environment where the rightwing have put a target on the Squad’s back. On Tuesday night, for example, Fox host Tucker Carlson launched a racist attack against Omar that could arguably be seen as an incitement to violence against the congresswoman. “[Omar] has undisguised contempt for the United States and for its people,” Carlson told his 3 million viewers. “That should worry you, and not just because Omar is now a sitting member of Congress. Ilhan Omar is living proof that the way we practice immigration has become dangerous to this country. A system designed to strengthen America is instead undermining it.”

America is becoming an increasingly hostile place for women and for people of color. Pelosi’s constant public attacks against the four newly elected women of color aren’t just disrespectful, they’re dangerous. Whether she means to or not, her repeated insinuations that the Squad are rabble-rousing upstarts who are undermining the Democratic party helps bolster the right’s vitriolic narratives about the congresswomen. As America grows increasingly brazen in its bigotry, Pelosi should be aggressively standing up for her freshman colleagues, not trying to tear them down. So why isn’t she?

Well, to put it bluntly, I think it’s because she’s terrified of what her progressive colleagues represent. The Squad doesn’t just consist of four people, as Pelosi condescendingly told the Times; it represents the face of a new America. It represents a challenge to the traditional power structure. That doesn’t just scare bigots like Tucker Carlson, it scares the neoliberal establishment. It scares people who would never call themselves racist (they’d have voted for Obama for a third time if they could have!) but who clearly have a problem with young women of color speaking their mind. It scares people who champion more “diversity” – as long as that diversity keeps its mouth shut or sticks to the party line.

Proud racism advocates for walls to keep brown people out of America. Polite racism builds different sorts of walls; it leverage concepts like “civility” and “unity” to make sure certain voices are kept out of power, or are dismissed as trouble-making and divisive when they try and critique power. What “civility” really means, in all of these discussions, of course, is servility. What unity really means is uniform acceptance of the status quo. Progressives keep being told we shouldn’t criticize centrist Democrats if we want any chance at beating Trump in 2020; and yet establishment figures like Pelosi seem to have no problem criticizing progressive Democrats and the millions of people they represent.

In a press conference on Thursday, Pelosi brushed away questions about her feud with the squad, grandly stating that “Diversity is our strength. Unity is our power.” Is it really? Because I don’t see any diversity or unity from where I’m looking. I just see a lot of old-fashioned hubris."