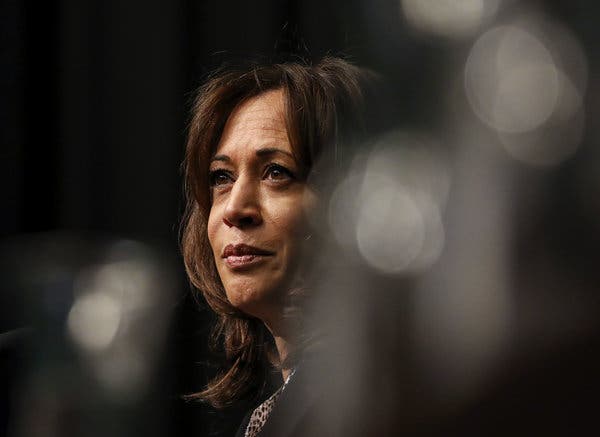 "Kamala Harris along with Elizabeth Warren  the thinking person's candidates for President.
"By Elise C. BoddieJune 6, 2019
We need more ideas like the one Senator Kamala Harris of California proposed last week to stop abortion laws from going into effect unless the federal government agrees they comply with Roe v. Wade.
This idea, known as preclearance, is widely considered the single most effective civil rights tool in American  because it blocks bad policies before they can take root and spread harm across generations.
Ms. Harris’s proposal focuses on laws that harm women. But the concept ought to be extended to racial disadvantage. Every candidate should offer similar proposals in areas like policing, housing, education  transportation. It’s the best way to stop discrimination.
Ms. Harris modeled her idea on a section of the Voting Rights Act of 1965, which for decades allowed the Justice Department or a federal court in Washington to prevent harmful voting laws in places with chronic discrimination. Preclearance was created to combat the pernicious methods Southern states used to stop black people from voting after the 15th Amendment prohibited them from doing so outright.
It lifted a huge burden off voters who otherwise would have been stuck battling discriminatory laws in court, long after elections had passed, costing hundreds of  dollars (if not millions).
This changed in 2013 when a conservative majority on the Supreme Court gutted preclearance in Shelby County v. Holder. That resulted in a wave of voter suppression, including North Carolina and Texas rushing to reinstate discriminatory voter ID laws that had been blocked.
But the court also acknowledged that Congress can still legislate preclearance in places that discriminate. State legislatures have even broader authority to do so.
This idea is vital because racial discrimination morphs and mutates, sometimes to evade , other times in spite of it, as I wrote in a 2016 law review article. That’s why we can’t rely only on courts and litigation, nor on  and piecemeal tactics. We need bold solutions that match the scope, adaptability  intensity of racial discrimination. Preclearance does that.
Here’s how it could work in housing.
Local zoning laws play a major role in denying housing opportunity by perpetuating the enormous wealth gap between white people and black people. Rich towns often require large lot sizes for single-family homes, making them more expensive. This has the effect of keeping out black families, who didn't benefit from decades of government largesse (like subsidized mortgages) available only to whites.
Under a national system of preclearance, a federal agency like the Department of Housing and Urban Development, or a comparable state agency, would have to approve these laws before they went into effect. The town would have to show that the ordinance did not have the intent or effect of excluding people of color.
After reviewing the town’s information, the government agency would decide, within a certain amount of time, whether to object to the ordinance. (The Civil Rights Division at the Justice Department used a similar process to review thousands of proposed voting changes under the Voting Rights Act.)
To do this, agency employees would conduct interviews or solicit public testimony and comments about the purpose and likely impact of the ordinance. They could research local and regional data on race and income to identify people who would be  while taking into account which populations are moving into and out of the area. If the agency did not have enough information to reach a conclusion, it could ask the town for more data.
If it found that the ordinance was discriminatory, the agency would block it. Then the town would either modify it or discard it. But the ordinance would go into effect if the agency had no objections.
This idea could apply to , too.
Imagine a local police department with a history of discrimination adopts a new stop-and-frisk policy. Under preclearance, this policy would have to be reviewed by federal authorities, or by an independent state agency, before it could be carried out.
As a condition of approval, the agency might insist on training police officers not to use race alone in stopping people unless they match a specific description from a trustworthy source. It might also bar stops based solely on people’s presence in a high-crime area.
This process would give communities a chance to work with police departments to promote greater accountability, such as requiring officers to identify themselves with a business card during every street stop, including traffic and low-level stops (like for selling loose cigarettes). The New Jersey Institute for Social Justice, on whose board I sit, is doing this work.
Some people might object that preclearance would be too burdensome or bureaucratic and that it would undermine the autonomy of states and cities. But as state attorneys general (including Ms. Harris, a former California attorney general) who dealt with preclearance have acknowledged, its benefits far outweigh the costs. And the expertise already exists to do preclearance effectively: The administrative process that was in place before the decision in Shelby County v. Holder had been streamlined to minimize its burdens.
Of course, there is an even simpler way for states and localities to avoid costs: They can stop discriminating. Ill-conceived policies that disproportionately harm or intentionally discriminate against people of color result in lasting, often irreparable damage.
Ms. Harris, along with the drafters of the Voting Rights Act, has pointed us toward a better way. Her fellow presidential candidates should take up the challenge.
Elise C. Boddie (@eliseboddie) is a law professor at Rutgers Law School where she directs the Inclusion Project."

Opinion | Kamala Harris Has a Brilliant Idea on Abortion - The New York Times
Posted by John H Armwood II at 8:28 AM