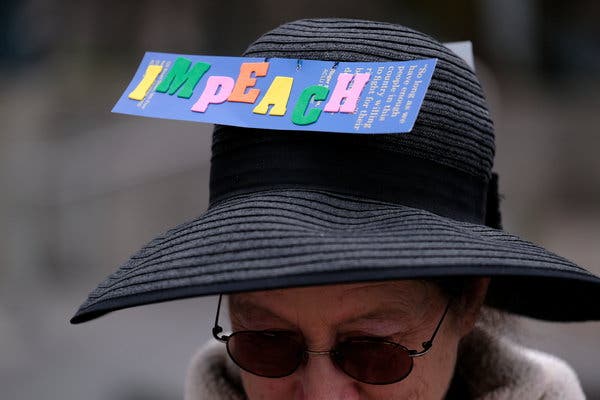 "Until quite recently, Democratic House leaders justified their refusal to begin an inquiry into impeaching Donald Trump by saying that it wasn’t something their rank-and-file voters cared about. “I can tell you I never hear somebody bring up the Mueller report,” Representative Cheri Bustos, chairwoman of the Democratic Congressional Campaign Committee, said in Chicago last month.
After the Memorial Day recess, that argument is no longer tenable. Across the country, Democratic voters have begun demanding that their representatives take a position on impeachment. “At virtually every town hall, round table, or even, today, a kaffeeklatsch at a senior center, people want to know what we are going to do about this guy,” Mary Gay Scanlon, Democrat of Pennsylvania, told me. Scanlon is vice chairwoman of the Judiciary Committee, which would oversee an impeachment inquiry, and two weeks ago she came out in favor of starting the process.
“There’s been a shift,” said Madeleine Dean, a freshman Democrat from Pennsylvania who also sits on the Judiciary Committee, and also wants to begin an impeachment inquiry. At a town hall last week, one of the first questions she was asked was about impeachment. When she visited local stores and barbershops, she told me, constituents approached her and said, of Trump, “You cannot let the behavior stand.”
On Friday, Bennie Thompson, a Mississippi Democrat who is the chairman of the House Homeland Security Committee, told MSNBC’s Chris Hayes that he’d come around to supporting an impeachment inquiry after speaking to people in his district: “To the person, everybody said, ‘What are you all going to do about President Trump?’” Jamie Raskin, a Maryland Democrat on the Judiciary Committee, told me, “I had about a dozen events this weekend, and there was an overwhelming sense that we have been presented with abundant evidence of high crimes and misdemeanors and we need to launch an inquiry.”
According to a CNN poll conducted last week, 76 percent of Democrats favor impeachment. (The poll did not ask about simply beginning an impeachment investigation, which is what some House Democrats are calling for.) Impeachment is favored by 41 percent of voters overall, not a majority, but far more than supported impeachment at the beginning of the Watergate hearings.
It’s no wonder so many Democrats want their representatives to take a more aggressive approach to the president. It has now been five months since the party took control of the House of Representatives, a month and a half since the redacted report by the special counsel Robert Mueller was released, and almost a week since Mueller stood before the nation and all but asked Congress to hold a lawless president accountable.
Yet Democrats have largely failed to even begin presenting a cohesive case to the public about Trump’s corruption and criminality. That could start to change next week, when the Judiciary Committee launches hearings into the Mueller report, but no blockbuster witnesses are yet lined up. The actual contents of the Mueller report should have been devastating for Trump. Instead, thanks to Bill Barr, an attorney general who acts more like a Fox News pundit, the administration has managed to obscure Mueller’s findings, and then go on the offense against the investigation itself.
[Listen to “The Argument” podcast every Thursday morning, with Ross Douthat, Michelle Goldberg and David Leonhardt.]
Resisting calls to open an impeachment inquiry, Speaker Nancy Pelosi has argued that various congressional committees need to continue their investigations. Yet many of these investigations have been stymied, particularly in the Judiciary Committee. “The president’s wholesale defiance of Congress, and orders to not participate in our investigation, have created an untenable situation,” said Raskin. “The members are just livid about this categorical defiance of congressional power.”
Barr refused to show up for a hearing last month. In April, the House subpoenaed the unredacted Mueller report and underlying evidence, demanding that it be turned over by May 1. It has not been. The former White House counsel Don McGahn, a major source in the Mueller report, refused to comply with a congressional subpoena, and the House has yet to move to hold him in contempt of Congress or to go to court to have its subpoena enforced. Mueller himself has said he doesn’t want to testify, and the House is still deciding whether to compel him.
As this drags on, it will be ever more difficult for Democrats to corral public attention. Opening a formal impeachment inquiry would put the question of Trump’s lawbreaking at the center of national life, and could give the House an edge in court. “It is very likely that the courts will regard our investigative powers as being at their zenith in the middle of an impeachment investigation,” said Raskin, who was a constitutional law professor before he got to Congress.
Pelosi is a formidable person and, as she herself once said, a master legislator, so it’s tempting to imagine that she has some sort of plan for curbing Trump’s abuses of power. In Michael Wolff’s new book, “Siege: Trump Under Fire,” Steve Bannon, Trump’s former chief strategist, suggests that Pelosi has been waiting for the president to self-destruct ever since he was inaugurated. “Pelosi, Bannon felt, saw the greater truth: The Trump administration would undo itself,” Wolff wrote.
Perhaps he will, but meanwhile, Trump is undoing American governance. Greg Stanton, a Democrat from a swing district in Arizona, is a member of the Judiciary Committee, and might seem like the sort of freshman who needs to be protected from taking a tough vote on impeachment. Last week, he came out for starting an inquiry. “I think there’s been an over-analysis of the politics of it,” he told me. “I think there should be more focus on simply asking everyone what you think the right thing to do is.”
The moment demands it, and so do the people who put Democrats in charge."