Opinion | The Senate Is as Much of a Problem as Trump 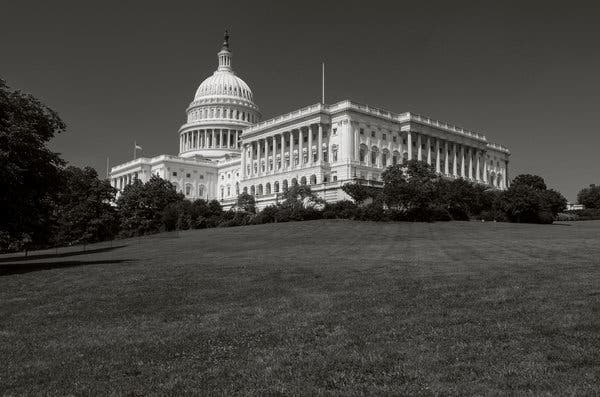 The Senate is a problem for Democrats.

The first is short-term. The odds that the Democratic Party will win a Senate majority in 2020 are slim. To get to 50 seats — which is only enough if they win the White House — they need a net gain of three seats.

[Jamelle Bouie will answer your questions about his column on Twitter on Monday at 1 p.m. Eastern: @jbouie]

But while there are 22 Republicans up for re-election next year, only two of them are in Democratic-leaning states, and one of those incumbents — Susan Collins of Maine — is incredibly popular with her constituents. There are almost-swing states that Democrats could win, but the strongest candidates have either declined to run (Stacey Abrams of Georgia) or set their eyes on the presidency (Beto O’Rourke and Julián Castro of Texas). And there are states that Democrats hold, like Alabama, that will fall back to Republicans unless everything breaks in the incumbent’s favor.

If, somehow, Democrats win a Senate majority and defeat President Trump, they’ll have to make fundamental changes to the rules of the chamber — like ending the filibuster — if they want their agenda to move forward.

And if they can’t win a majority, Mitch McConnell may cripple a Democratic presidency from the start, blocking judicial and executive branch nominations in an even more extreme replay of his blockade of President Barack Obama’s final Supreme Court nominee, Merrick Garland. Without the Senate in hand, Democrats could win the immediate fight against Donald Trump in 2020 but lose the larger battle against the Republican Party that supported and enabled him.

[Join Jamelle Bouie as he shines a light on overlooked writing, culture and ideas from around the internet. For exclusive thoughts, photos and reading recommendations, sign up for his newsletter.]

The second problem is a set of long-term trends that will benefit the Republican Party as long as it maintains its hold on the least populated states and burden the Democratic Party as long as it represents most of the densest, most diverse and fastest-growing major metropolitan areas in the country.

In 1790, the largest state was Virginia, with 747,610 people, and the smallest was Delaware, with 59,094 people. Because of the Senate’s equal representation of states, Delawareans had more than 12 times the voting power as Virginians — a large disparity, but not a yawning one. Today, the largest state is California, with nearly 40 million residents, and the smallest is Wyoming, with just under 600,000 people, a disparity that gives a person in Wyoming 67 times the voting power as one in California.

As it stands now, the Senate is highly undemocratic and strikingly unrepresentative, with an affluent membership comprised mostly of white men, who are about 30 percent of the population but hold 71 of the seats. Under current demographic trends this will get worse, as whites become a plurality of all Americans but remain a majority in most states.

The Republican coalition of rural whites, exurban whites and anti-tax suburbanites may not be large enough to win the national popular vote in a head-to-head matchup with Democrats. But it covers a much larger part of the country’s landmass, giving it a powerful advantage in the Senate. And while this coalition — or its Democratic counterpart of liberal whites and the overwhelming majority of nonwhites — isn’t set in stone, it could be years, even decades, before we see meaningful change in the demographic contours of our partisan divides.

Politics is unpredictable and events matter, but it’s also clear that Republicans are on the verge of a durable structural advantage in the Senate that will make Democratic majorities rare outside of the occasional “wave” election.

There are no immediate solutions to this problem. But progressives — who have the most to lose if the Senate becomes an even larger obstacle to their preferred policies — have started to brainstorm about reforms that might make the Senate more democratic and representative without changing the Constitution itself.

One path involves statehood. In his book “It’s Time to Fight Dirty: How Democrats Can Build a Lasting Majority,” David Faris, a political scientist at Roosevelt University in Chicago, calls for at least eight new states. The first is Washington, D.C. The second is Puerto Rico, assuming its inhabitants agree to statehood. And the next six would be formed from America’s superstate, California. “If the state were more or less evenly divided between left and right, its comparative lack of power in the federal government would be less of an issue,” Faris writes. “But California is now one of a handful of the most left-leaning states in the entire union, and Californians’ lack of voting power and Senate representation means that the country is pulled inexorably to the right.”

It’s a radical solution, and while it might work, it has one clear downside — Republicans could respond in kind with similar schemes for conservative megastates like Texas and, to a lesser degree, Florida. And that’s assuming California voters would sign on to the project. But finding ways to expand the Senate with new members is the right idea, and a recent report from the Roosevelt Institute, a progressive think tank, offers an approach that doesn’t rely on extreme forms of constitutional hardball.

To accommodate the demographic trends of the next few decades, the institute calls for expanding the Senate to include other federal units besides states, for the sake of greater democracy and representation: “A modern Senate should reflect a modern federalism encompassing not only states and the federal government but also the district, territories and tribes.”

Under the Roosevelt Institute proposal, Washington, D.C., the Atlantic territories, the Pacific territories and the Native tribes would each receive two senators and a voting member in the House of Representatives. Individual units could still pursue statehood, but the lack of that recognition wouldn’t preclude representation in Congress.

The logic is straightforward. Native Americans have long been grossly underrepresented. And in addition to states, the United States has dominion over a number of other political units with little or no representation in Congress. Not only is this unfair in principle, but excluding those districts and territories also serves to exacerbate the Senate’s problems with representation, since most of those areas are majority nonwhite.

Other democracies — Australia, Brazil, France, Finland and Denmark, for example — grant equal representation to federal districts and overseas territories. New Zealand, notes the Roosevelt Institute, “has had reserved seats for the Maori Indigenous population in its unicameral legislature since 1867.”

What’s more, it’s far from the most radical change made to the Senate. That distinction would go to the 17th Amendment to the Constitution, which allowed direct election of senators. This move, which decoupled the interests of a state’s senators from its state legislature, was a fundamental change to the Senate, virtually obliterating the direct link the framers envisioned for the Senate and the states. If Congress “was willing to renege on a central purpose of one of its chambers,” the Roosevelt report argues, “a mere expansion of the Senate’s numbers for the purpose of representational equality is modest in comparison.”

The Democratic Party’s singular focus on Donald Trump makes sense: Beating him removes the most immediate threat to the nation’s political health. But America’s problems are also structural, and reform, whether short-term or long-run, depends on an active Senate that represents the entire United States. Given a Republican Party whose political interests lie in restricting the scope of our democracy, it’s up to Democrats to act. They need to win the Senate so that they can fix the Senate."

Opinion | The Senate Is as Much of a Problem as Trump
Posted by John H Armwood II at 9:24 AM