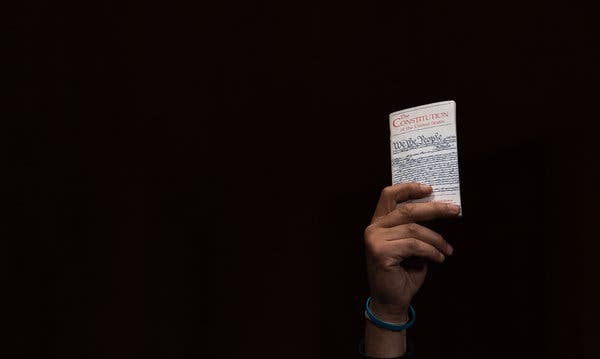 Admitting the truth is the first step toward our country’s restoration.

America, as we knew it, is lost.

Not completely gone and not irrevocably ended, but forever altered. Or, maybe it is fair to say that our concept of America itself was a concoction, that it was always one solid body blow away from buckling at the knees.

In the course of three years, he has completely taken over one of America’s two primary political parties, the Republican Party, a 165-year-old institution, the party of Abraham Lincoln.

He has cowed once anti-Trump Republican lawmakers into being his. Who can forget Lindsey Graham in 2016 saying:

“I’m not going to try to get into the mind of Donald Trump because I don’t think there’s a whole lot of space there. I think he’s a kook. I think he’s crazy. I think he’s unfit for office.”

Trump seems to have found in Attorney General William Barr the Roy Cohn he has so sorely missed and desired.

Well, Trump’s mind is unchanged, but Graham’s isn’t. Graham now obsequiously serves Trump like a house elf from the “Harry Potter” series. It is an incredible conversion to behold — from best friend of John McCain, one of the most honored Republicans to serve this country in recent times, to the greatest ally to Trump, a man whose whole life is anathema to everything the Republican Party used to purport to stand for.

Trump elevated the coarsest constituencies of the party — the racists, the Nazis, the white supremacists and white nationalists, the xenophobes — while also charming and enchanting many of the shrinking number of moderates who once simply tolerated the radicals so that they could benefit from their contributions and votes.

Now, they are all part of the same racist, sexist, transphobic, Muslim and Mexican-hating circus, and he’s the ringmaster.

He has secured enough support that it has insulated him from serious consequences for his corruption, lawlessness, ignorance and grift. Among Republicans, there are no watchdogs for this presidency, only lap dogs.

America is coming to see the damage that can be done when a demagogue seizes the reins of power in a country too dependent on custom.

America naïvely believed that the presidency was for honorable men (women, shamefully, still haven’t been given a shot), that the president of us would always in some form be the best of us. Few could conceive that a character who lacks character would get the chance to sit in that seat. And now that he’s there, it has been painfully underscored that removal is nearly impossible and that power can go nearly unchecked.

This is all up to us.

The members of the Democratic leadership, petrified that they might somehow damage the party’s prospects in 2020, are dragging their feet on impeachment like they’re wearing cement shoes.

Republicans lawmakers are all in as Trump’s paladins.

Trump has chosen the most extreme confrontational posture toward congressional oversight, virtually guaranteeing that the executive and legislative branches of government will be tied up in court for months, or even years.

All voters can do now is to look toward the raft of candidates seeking to unseat Trump and think first about who is likely to be able to do that, but also about what we want the new America that rises from these ashes to look like.

Whereas the blue wave of the midterms filled Democrats with confidence and swagger, fear of placing a single foot wrong in the 2020 run against Trump has left too many diffident and mousy.

Many of the candidates with the boldest vision for a more progressive, inclusive America are languishing in the early polls. I understand that those polls will change countless times before a nominee is chosen and rarely is the early leader the final winner. But, I still think some Democratic soul-searching is in order.

I think it is sad and self-defeating to simply assume that the safest choice is the best choice, that inspiration doesn’t have an amazing power to sway. Just look at Trump himself.

Prudence is antithetical to excitement.

I’m not saying that every trillion-dollar progressive proposal is solid or trying to divine which ones have a chance in hell of making it through Congress.

I am saying, however, that the best time to truly rebuild a thing is when it has been destroyed, when the slate is clear and people are champing for change.

Democrats have an unbelievably wide berth here to be daring and inventive. The question is only whether they are willing to stick out their necks or if they would rather tuck their tails."