Opinion | If This Is a Constitutional Crisis, Act Like It 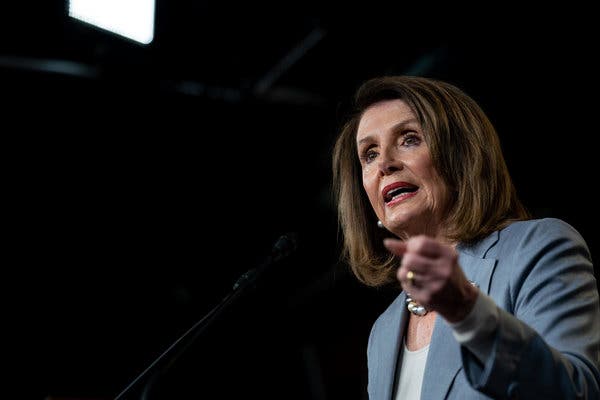 
In their best-selling 2018 book “How Democracies Die,” the Harvard professors Steven Levitsky and Daniel Ziblatt wrote about the concept of “constitutional hardball,” in which politicians “deploy their institutional powers as broadly as they can get away with.” One example they gave was the way that Nicolás Maduro, the Venezuelan president, responded when the opposition party won control of the country’s legislature in a landslide 2015 election. To thwart his political enemies, Maduro turned to the Venezuelan supreme court, which was packed with loyalists, and which “effectively incapacitated” the legislature by striking down most of its bills. The letter of the law was maintained even as the system was subverted.
Now a clash between an autocratic president who disdains democratic norms and a chamber of the legislature controlled by the opposition is playing out in the United States. Donald Trump has said that he intends to fight all congressional subpoenas. The House Judiciary Committee just voted to recommend that Attorney General Bill Barr be held in contempt after Barr ignored a deadline to produce documents from the investigation of Robert Mueller, the special counsel. Treasury Secretary Steven Mnuchin is blatantly refusing to comply with the law requiring him to turn Trump’s tax returns over to the House Ways and Means Committee. Former White House Counsel Don McGahn is refusing to comply with a House subpoena, and Trump’s son Donald Trump Jr. has signaled that he might not cooperate with a subpoena from the Senate Intelligence Committee.
Some have argued that this isn’t yet a constitutional crisis because Congress’s constitutional remedies haven’t been exhausted; it can still turn to the courts to enforce its prerogatives. That’s little comfort for many Democrats, who despair of a fair hearing before our Supreme Court, whose conservative majority includes two judges chosen by Trump in part for their expansive view of executive power. But however you define constitutional crisis, there’s no question we’re in a moment of constitutional hardball. So far, however, only Republicans really seem to be playing.
At a Thursday news conference, House Speaker Nancy Pelosi said that a constitutional crisis has begun. “The administration has decided they are not going to honor their oath of office,” she said, echoing Representative Jerry Nadler, Democratic chairman of the Judiciary Committee. In addition to Barr, Pelosi said the House could hold others in contempt. Yet she repeated the Democratic refrain that the House needs to engage in further investigation rather than impeachment. “What we want to do is get the facts, we want to do it in a way that is the least divisive to our country,” she said.
Pelosi is a sharp and pragmatic woman, and her evident belief that impeachment carries strategic risks for Democrats should be taken seriously. But it is incoherent to argue that Trump constitutes an existential threat to the Constitution, and that Congress should wait to use the Constitution’s primary defense against such a threat. Democratic fear of divisiveness — even as Republicans gleefully embrace it — is leading to unilateral political disarmament.
When it comes to holding the Trump administration accountable, contempt votes are a fine first step, but they’re mostly symbolic unless Democrats find a way to enforce them. A criminal contempt charge would have to be prosecuted by Barr’s own Justice Department, which it will almost certainly not do. A civil citation could take months or even years to move through the courts. A subpoena fight from the gun trafficking case known as “Fast and Furious” — which led to then Attorney General Eric Holder being held in contempt in 2012 by a Republican-controlled House — was only settled last month.
In the face of an administration that is trying to amass dictatorial powers, Democrats need to bring to bear all the powers of their own. Trump’s outright rejection of congressional authority makes impeachment proceedings necessary, but even impeachment alone is not sufficient.
Representative Jamie Raskin, a Democratic member of the Judiciary Committee and former constitutional law professor, points out that Congress has the power of “inherent contempt.” That’s a provision, last used in the 1930s, that allows the body to enforce its own orders, including by sending out the House’s sergeant-at-arms to arrest people. “People keep saying to me, ‘Well, isn’t that an old law?’ ” he said, but it’s not a law with an expiration date. In fact, he argues, “the older it is, the more venerable it is.”
“I know that the Capitol Police are perfectly capable of holding people who violate the laws and rules of Congress, because lots of my constituents, specifically high school students, got arrested in our last Congress protesting at Speaker Paul Ryan’s office,” Raskin said. Short of arresting Barr, he said, Congress could use inherent contempt to directly levy fines. “We are going to dust off some old powers of Congress, and we are going to exercise all of the powers we have to vindicate the powers of the people,” he said.
Let’s hope so. There are dangers in increased Democratic combativeness, but even greater dangers in timidity. “Fighting constitutional hardball with constitutional hardball is a high- risk and potentially very treacherous path,” Levitsky, the co-author of “How Democracies Die,” told me on Wednesday. Yet he allows that there are moments when it may be necessary. When an autocrat is in power, he said, “either the opposition continues to play by the old rules and potentially gets steamrolled, and democratic institutions themselves may be left vulnerable, or the opposition fights back with constitutional hardball and risks escalation into an even worse constitutional crisis.” Neither of these are good options, but they’re the ones we have. If Democrats believe that the constitutional crisis has already begun, they ought to act like it."

Opinion | If This Is a Constitutional Crisis, Act Like It
Posted by John H Armwood II at 6:54 AM