Is the U.S. a Democracy? A Social Studies Battle Turns on the Nation’s Values - The New York Times 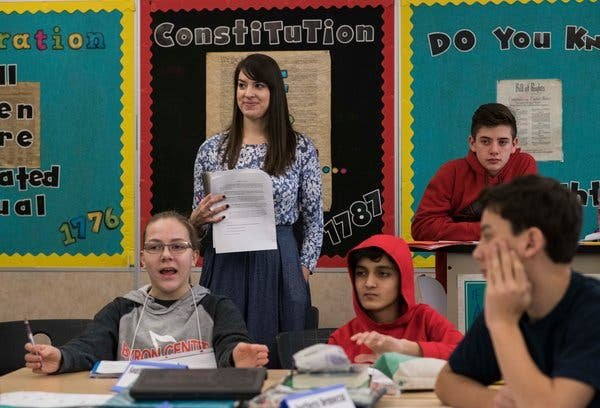 Michigan spent five years debating how to teach American history. One of the biggest questions was how to describe the nation’s government.

LANSING, Mich. — Bruising political fights are usual business in Becky Debowski’s eighth-grade social studies classroom. From a model Constitutional Convention to a bare-knuckle debate in Congress over slavery, she regularly has students assume roles of partisans throughout American history, like Abraham Lincoln and John C. Calhoun.

After the exercises, the class comes back together to debate whether the nation lived up to what the state of Michigan calls “core democratic values,” such as equality, liberty and diversity.

For decades, the values have been the heart of the state learning standards in social studies, a doorstop of a document that guides what teachers of history, civics, economics and geography cover in their lesson plans.

“I’m really proud of my students,” Ms. Debowski said. “They can handle the complexity.” So she was angry last year when she learned of a proposed revision of the state standards, in which the word “democratic” was dropped from “core democratic values,” and the use of the word “democracy” was reduced.

The changes were made after a group of prominent conservatives helped revise the standards. They drew attention to a long-simmering debate over whether “republic” is a better term than “democracy” to describe the American form of government.

That the two sides in that tussle tend to fall along party lines, each preferring the term that resembles their party name, plays no small part in the debate. But members of the conservative group also brought to the table the argument that K-12 social studies should be based on a close, originalist reading of the United States’ founding documents.

They contended that the curriculum ought to focus more on the nation’s triumphs than its sins. And they pushed for revisions that eliminated “climate change,” “Roe v. Wade” and references to gay and lesbian civil rights.

After a local publication, Bridge Magazine, reported the changes, the backlash in this political swing state was intense. In response, the state brought a broader group of Michiganders into the process to redraft the standards, which will be presented to the State Board of Education on April 9. The board, an elected body with eight members, will then vote on whether to adopt the document.

The United States, unlike many other developed nations, lacks a national curriculum that defines what students should know. Each of the 50 states can create its own learning standards.

These documents are closely examined. While schools can teach material not included in them, they shape the content in standardized tests, and many educators rely heavily on the standards as they craft lesson plans. Student teachers are trained to use them.

Activists have long seen influencing state standards as an effective way to shape the next generation of voters. In 2010, conservatives on the Texas State Board of Education removed the word “democracy” as a description of American government, prompting protests. Georgia has also debated the term, eventually settling, in 2016, on standards that use the phrase “representative democracy/republic.”

The Michigan conservatives — who prefer “constitutional republic” — say their arguments are historical, not partisan.

The kindergarten section of the new draft of the Michigan social studies standards. Previously, conservatives pushed for the nation to be called a “constitutional republic” founded on “core values,” not “democratic values.” The previous draft also used the term “roles of the citizen” instead of “civic participation.”

While the founders were indeed skeptical of direct democracy, mainstream historians, political scientists and legal scholars say that the United States is both a representative democracy and a republic — and that there is no contradiction between those terms.

Some of the country’s political processes, like ballot referendums, are more democratic than others, like the Electoral College. Grappling with that complexity is key to understanding American government, according to social studies experts.

The Michigan Department of Education invited Mr. Colbeck to participate in the standards-writing process after he submitted a 13-page critique of a 2015 draft of the document. Mr. Colbeck, a former aerospace engineer who became active in politics through the Tea Party movement, saw liberal bias throughout the standards.

Asked to name the influences on his view of American history, Mr. Colbeck cited Dinesh D’Souza, the right-wing commentator, and a radio talk show hosted by Levon R. Yuille, a pastor and anti-abortion activist.

“I wanted to make sure there was a seat at the table for a conservative worldview,” Mr. Colbeck said.

After the proposed revisions garnered local media attention, hundreds of people flocked to community meetings to voice their outrage about what they considered conservative bias. Thousands more registered their objections online.

Ms. Debowski, the eighth-grade social studies teacher, was among those against replacing “democratic values” with “core values.” She was capable, she said, of explaining the difference between party names and political concepts. “It belittles my subject,” she said.

Many of the students who protested were less worried about terminology than about the way the standards dealt with gender and race. Alex Hosey, a 16-year old high school sophomore in East Lansing, objected to what had been left out, such as any mention of redlining, which contributed to the racial segregation of Michigan cities.

“Hiding our nation’s sins isn’t the right way to do it,” he wrote in a letter to the State Board of Education. “Teach us about everything — the good and the bad, so we can learn to think for ourselves.”

Marsha Lewis, a Detroit assistant principal and a chairwoman of the bias review group.

Back to the Drawing Board

Under fire, the state education agency asked for volunteers to help rewrite the standards yet again — for the third time in five years.

Out of 144 people who applied, 116 were selected. They included teachers, college professors, parents, students and retirees. They were placed on subcommittees dealing with every aspect of the document, from American history, civics and economics to “bias review,” and sorted through thousands of pages of public comments.

They added depth to sections on indigenous peoples’ history. Roe v. Wade, climate change and gay and lesbian rights were all restored. The bias review committee suggested the terms “enslaved people” or “enslaved Africans” instead of “slaves.”

The overall goal was that every Michigan student — a third of whom are nonwhite — would be able to “see themselves” in the social studies standards, said Marsha Lewis, a Detroit assistant principal and a chair of the bias review group.

But in the days before the document was to be sent to the State Board of Education, fundamental questions about how to describe American government and citizenship had not been resolved.

It was not just that some Democratic-leaning committee members liked the term “democracy” while some Republican-leaning members preferred “republic.” The debate was really about bigger disagreements that transcended party lines: about how to deal with populism and protest, and about whether the United States is a unified entity of citizens or a conglomeration of groups divided by race, class, language and other identities.

On March 7, the heads of all the subcommittees gathered at the Historical Society of Michigan in Lansing to go through the draft one last time. The laptop screen of the head writer, a district social studies consultant named Dave Johnson, was projected onto the wall as he made last-minute revisions in a Google document.

Should “responsible citizenship” be replaced with “civic participation,” in an effort to include undocumented students?

Were elementary school students ready to learn about the right, stated in the Declaration of Independence, to “alter or abolish” a government?

“There’s a treason clause in the U.S. Constitution,” said Michael Libbee, a professor of geography at Central Michigan University.

“It’s only treason until it works,” replied Ellen Zwarensteyn, executive director of the Michigan Center for Civic Education.

In the end, “alter or abolish” was included, though the number of mentions was greatly reduced. The writers replaced many, but not all, instances of the word “citizenship” with “civic life” or “civic participation.”

After lunch, Mr. Cameron, the committee leader and a state education consultant, tacked to the walls poster pages of handwritten suggestions from African-American and Asian-American community groups.

Among their suggestions were to add references to Korematsu v. the United States, the Supreme Court case that allowed Japanese internment during World War II. They also asked for mentions of the Chinese Exclusion Act, the Flint water crisis, the #MeToo movement and Black Lives Matter.

Ms. Zwarensteyn took careful notes. Some of the most rigorous debates had occurred on the civics subcommittee she helped lead, where Michael Warren, a circuit court judge, was a strong conservative voice. Judge Warren preferred the term “first principles” to “democratic values,” and had pushed for the civics standards to be based on a close reading of the founding documents.

The list of core values that the standards writers eventually agreed on was “equality; liberty; justice and fairness; unalienable individual rights (including life, liberty and the pursuit of happiness); consent of governed; truth; common good.”

And after months of sometimes bitter debate, the group decided these values could still be called “democratic.” As part of a compromise, the nation’s political system would be referred to primarily as “American government,” but also, in some instances, “constitutional government” and — yes — “democracy.”

Korematsu and the Flint water crisis made it into the standards. Redlining, the Chinese Exclusion Act, #MeToo and Black Lives Matter did not. Neither did James Madison, to the consternation of Mr. Warren.

Mr. Colbeck, the former state senator who had helped write the previous draft, was displeased. Calling the nation a democracy was not “politically neutral and accurate,” he said.

There will still be time for public comment and revision. Education officials plan to introduce the new standards in “listen and learn” meetings across the state this spring.

If the Board of Education, which after November’s election went from a 4-4 partisan split to a 6-2 Democratic majority, votes to adopt the document, the state will begin training teachers on how to use the new standards.

Then, most likely in the next decade, policymakers will outline new priorities for Michigan schools, and they will ask educators and experts to rewrite the standards once again. The process of retelling the nation’s history — deciding what gets left out and who is heard from — never ends."

Is the U.S. a Democracy? A Social Studies Battle Turns on the Nation’s Values - The New York Times
Posted by John H Armwood II at 10:48 AM