Ilhan Omar should be more radical about Israel, not less | Barnaby Raine | Opinion | The Guardian 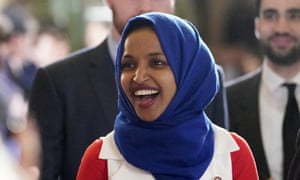 "Representative Ilhan Omar is not a vicious antisemite, she is one of few good things about Congress. But she was wrong to suggest this week that America only supports Israel because a powerful lobby buys off US politicians. Far from being too radical, the problem with that view is that it lets America off the hook. The American state needs no conspiracy or blackmail to encourage it to do damage around the world. It is because her worldview can entertain this very possibility – so rarely contemplated in Washington – that Omar represents an enormously hopeful step in national politics. That critical instinct can enable opposition to the American-Israeli alliance and to antisemitism too.

When Democrats dissent on foreign policy, they usually insist that America is a gorgeous dream poorly applied by foolish leaders. Barack Obama sang this tune in complaining that the invasion of Iraq was a “dumb” war, pleading instead for the intelligent practice of American power. Bernie Sanders labels imperial adventures like the Iraq escapade “counterproductive”, echoing the assumption that America’s intentions are basically benign. Hillary Clinton’s response to MAGA in 2016 went noticeably further: “America never stopped being great!”

Since her election last year, Omar has opened the door to a different, a taboo argument. Her interventions over Venezuela and the southern border broke from the Democratic script and caused controversy by hinting that the aims and not only the means pursued by the American state frustrate the achievement of human freedom. The likes of James Baldwin and Malcolm X knew this all too well, and it has long been intuitive to many millions beyond America’s shores too. By endorsing the global movement for boycotts, divestment and sanctions against Israel (BDS), Omar moved well beyond those Americans who criticize Benjamin Netanyahu’s excesses confident that Israel, their old ally, remains a noble endeavor now in need of wise and moderating counsel from Washington. She flew a different flag, supporting Palestinians as a people dispossessed by the facts of might and conquest familiar to victims of colonization everywhere.

This is why Omar’s recent tweet was disappointing, blaming American support for Israel on lobbyists’ cash. The ultimately conservative, reassuring effect of concentrating on the Israel lobby is this: it suggests that American interests are fundamentally good, but that they are corrupted and distorted by some small clique. Antisemites take their cue from this supposition.

The deeper, tougher truth is that America supports Israel because at some level America is Israel; these are two settler-colonies born in violence, condemned by their original sins and by their later crimes to paranoias about the revenge of the wronged. America needs no monied lobby to see its common cause with Israel. Ilhan Omar should be better placed than most Democrats to see this, given that she seems less enamored of American greatness than they are. The distressing thing about her tweet was its inconsistency, it failure to live up to the promise she has tentatively begun to sketch.

There is an important Israel lobby in America, and it does a great deal of harm, though treating the problem as indigenous to a culture of Puritanism and genocide helps even here: America’s biggest pro-Israel lobby group is not the largely Jewish American Israel Public Affairs Committee (AIPAC) but the Evangelical organization Christians United for Israel (CUFI), which was much more important than AIPAC in pushing Trump to move the US embassy to Jerusalem. The lobby makes a just peace harder, and we should not fear condemning it; Democrats lining up to suggest even mentioning it is intrinsically antisemitic show just how cynically, how dangerously Israel’s supporters sometimes see antisemitism as cheap political football. But America does not need a lobby to back Israel.

Rightly Omar has shown some contrition over this and a previous, similar tweet. That should surprise nobody. Nor should we be surprised that the Republican House majority leader, Kevin McCarthy has never acknowledged the antisemitic connotations of his tweet claiming that George Soros and two other Jews were seeking to “buy” America’s elections. The tweet was posted days after a bomb was sent to Soros’s home last October. Neither Omar’s quick retreat nor McCarthy’s avoidance are surprising because the deeply defensive antisemitic instinct – that America has a fundamentally healthy body politic whose problems all stem from an alien infestation – really belongs on the right and not the left, even though it can appear in both places. Now McCarthy leads the charge against Omar, accusing her of bigotry.

The Palestinian people do not inspire the world simply because they suffer. What we see through the cracks in Palestine is what many once saw in Nicaragua, in South Africa, in Vietnam: against the violence produced by fear, against anxious states killing in the defense of privilege, the best traditions of the oppressed offer a universal message. They prize dignity. Israel fills the land with walls and checkpoints, and Palestinians seek a future beyond that architecture of human misery. They know that it damages the jailor almost as much as it injures the jailed. This is a valuable lesson for Americans too, caught in their own forever war. Palestinians call not just for peace, but for a world in which free people can flourish, where words like “occupation”, “Apartheid” and “settler-colonialism” exist only in museums. Almost alone in Congress, this is the spirit that Ilhan Omar might be willing to champion. It is not a threat to Jews. In the end, it is the only thing that might offer hope to any of us."

Barnaby Raine is a PhD student in History at Columbia University

Ilhan Omar should be more radical about Israel, not less | Barnaby Raine | Opinion | The Guardian
Posted by John H Armwood II at 9:16 PM