The Border Wall: How a Potent Symbol Is Now Boxing Trump In - The New York Times 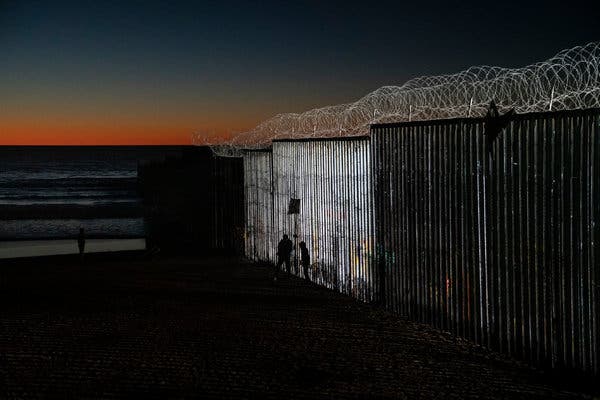 "WASHINGTON — Before it became the chief sticking point in a government shutdown drama that threatens to consume his presidency at a critical moment, President Trump’s promise to build a wall on the southwestern border was a memory trick for an undisciplined candidate.

As Mr. Trump began exploring a presidential run in 2014, his political advisers landed on the idea of a border wall as a mnemonic device of sorts, a way to make sure their candidate — who hated reading from a script but loved boasting about himself and his talents as a builder — would remember to talk about getting tough on immigration, which was to be a signature issue in his nascent campaign.

“How do we get him to continue to talk about immigration?” Sam Nunberg, one of Mr. Trump’s early political advisers, recalled telling Roger J. Stone Jr., another adviser. “We’re going to get him to talk about he’s going to build a wall.”

Talk Mr. Trump did, and the line drew rapturous cheers from conservative audiences, thrilling the candidate and soon becoming a staple of campaign speeches. Chants of “Build the wall!” echoed through arenas throughout the country.

Now, Mr. Trump’s fixation with a border wall — the material embodiment of his keep-them-out immigration agenda — has run headlong into the new realities of divided government, pitting him against Democrats who reject the idea out of hand. The impasse is particularly remarkable given that even some immigration hard-liners do not regard the wall as their highest priority and fear that Mr. Trump’s preoccupation with it will prompt him to cut a deal that trades a relatively ineffectual measure for major concessions on immigration.

“I’ve always thought it created a danger that he would trade almost anything in order to get the wall — I think that’s still a potential danger,” said Mark Krikorian, the executive director of the Center for Immigration Studies, a group that argues for less immigration. “I’m still worried about that now.”

That fear has been realized at times when Mr. Trump has explored a deal with Democrats on granting permanent legal status for undocumented immigrants brought to the United States as children, known as Dreamers. The president has always walked away at the last moment from committing to preserving the Deferred Action for Childhood Arrivals program, known as DACA, but on Friday, FAIR, an anti-immigration group, warned him again that it would be a mistake.

To many conservative activists who have pressed for decades for sharp reductions in both illegal and legal immigration — and some of the Republican lawmakers who are allied with them — a physical barrier on the border with Mexico is barely relevant, little more than a footnote to a long list of policy changes they believe are needed to fix a broken system.

The disconnect is at the heart of the dilemma facing Mr. Trump as he labors to find a way out of an impasse that has shuttered large parts of the government and cost 800,000 federal employees their pay. Having spent more than four years — first as a candidate and then as president — whipping his core supporters into a frenzy over the idea of building a border wall, Mr. Trump finds himself in a political box of his own making.

In transforming the wall into a powerful emblem of his anti-immigration message, Mr. Trump has made the proposal politically untouchable for Democrats, who have steadfastly refused to fund it, complicating the chances of any compromise.

“As a messaging strategy, it was pretty successful,” Mr. Krikorian said. “The problem is, you got elected; now what do you do? Having made it his signature issue, Trump handed the Democrats a weapon against him.”

The dynamic has been on vivid display this past week as Mr. Trump has argued that there can be no deal to reopen the government unless his wall is paid for, while Democrats, now in control of the House, have refused in ever sharper terms.

“A wall is an immorality — it’s not who we are as a nation,” Speaker Nancy Pelosi said on Thursday. “This is not a wall between Mexico and the United States that the president is creating here; it’s a wall between reality and his constituents, his supporters.”

Last month, in private comments to Democratic lawmakers after an Oval Office confrontation with Mr. Trump, Ms. Pelosi said the wall was “like a manhood thing for him.”

Yet it has also become an outsize symbol in the other direction for Democrats, many of whom supported at least some sort of barrier along the border in the past but now cast Mr. Trump’s wall as a travesty. Sixty-four Democrats in the House and 26 in the Senate voted in 2006 for the Secure Fence Act, which provided for hundreds of miles of fencing along the border. Among them were Senators Barack Obama, Hillary Clinton, Joseph R. Biden Jr. and Chuck Schumer.

“The only things that have changed is the situation at the border is worse and Donald Trump got elected,” said Kellyanne Conway, the president’s counselor.

Ms. Conway said Mr. Trump had become so committed to a wall because it would not only prevent the entry of many illegal immigrants and stem the flow of drugs, but also discourage migrants from coming in the first place.

“The reason he’s focused on the wall is he thinks you need a very robust physical barrier at the border that you can’t climb over, slide under, drive through or walk around,” she said. “He believes it’s got to be something that’s a deterrent that stops people from taking these perilous journeys.”

Beyond the symbolism, Democrats now argue that a wall is an expensive and ineffective means of curbing illegal immigration. The majority of undocumented immigrants are people who overstay visas, not people who sneak across the border. A report released in March by Democrats on the Senate Homeland Security Committee found that Border Patrol agents on the front lines said they needed more technology and additional personnel to curb illegal immigration and drug traffic, with less than one half of one percent mentioning a wall.

Mr. Schumer, now the Senate Democratic leader, has insisted for two years that any spending agreements contain language barring federal money for Mr. Trump’s wall. Republican leaders went along each time, even as the president became increasingly irate, once coming close to vetoing a spending package on the day of the White House signing ceremony.

While most Republicans refuse to say so publicly for fear of angering Mr. Trump, many share the view that the wall is only a piece — and nowhere near the most important one — of a broader set of actions needed to overhaul the immigration system, including cuts to legal immigration, tighter standards for granting asylum and better enforcement.

Mick Mulvaney, Mr. Trump’s acting chief of staff, gave voice to that position in 2015, when he was a congressman from South Carolina, telling a local radio station that Mr. Trump, at the time a presidential candidate, had an overly simplistic view of tackling immigration.

“The fence is an easy thing to sell politically,” Mr. Mulvaney said then. “It’s an easy thing for someone who doesn’t follow the issue very closely to say, ‘Oh, well, that will just solve everything, build the fence.’ The fence doesn’t solve the problem.”

“Just to say ‘build the darn fence’ and have that be the end of an immigration discussion is absurd and almost childish,” Mr. Mulvaney said.

John F. Kelly, Mr. Trump’s former chief of staff, enraged Mr. Trump last year when he privately told a group of Democratic lawmakers that the president had not been “fully informed” when he proposed a border wall during his campaign, and had since “evolved” under Mr. Kelly’s tutelage. “The Wall is the Wall,” the president responded in an angry tweet contradicting his top aide.

“To be honest, it’s not a wall,” Mr. Kelly said in an interview with The Los Angeles Times last month as he prepared to leave the White House, adding that the administration had abandoned the idea of a “solid concrete wall early on.” His comments prompted another irate tweet from Mr. Trump. “An all concrete Wall was NEVER ABANDONED,” he wrote.

Mr. Trump’s call for a border wall, initially a memory device to ensure that he spoke about immigration during campaign rallies, has become wildly popular with his core supporters.

Chained to a Wall

NumbersUSA, another conservative group that presses for stricter immigration policies, circulated an article last month suggesting that Mr. Trump drop his wall demand in favor of a plan to mandate that all employers use E-Verify, an electronic system that checks immigration status for prospective employees.

The wall “has sucked political capital from the pursuit of other, and arguably better, means to deter illegal immigrants,” wrote Heather Mac Donald of the Manhattan Institute.

Yet Mr. Trump has tethered himself to the wall and shows no sign of letting go.

Ann Coulter, who along with Rush Limbaugh, Matt Drudge and other conservative commentators has pressed Mr. Trump to live up to his campaign promise, said the focus on the wall was not to be to the exclusion of other policies aimed at stemming illegal immigration.

“We want that stuff too — but we also want a wall,” she said in an email on Friday. “The chant at every campaign rally wasn’t, ‘Enforce E-Verify!’ ‘Tax remittances!’” she added, referring to a proposal to tax cash payments sent by immigrants to their families in Mexico and Central America.

Advisers said the president became absorbed by the idea of a wall because it was the most memorable and tangible promise he made while stumping for the White House in 2016.

“He wants to call it a wall because that’s what he campaigned on,” said Christopher Ruddy, the chief executive of Newsmax and a friend of Mr. Trump’s. “He’s very obsessed about carrying out his campaign promises — I think to a degree that’s unhealthy — but that’s important to him, and that’s not a bad thing.”

Mr. Ruddy and some other advisers argue that Mr. Trump has more room to maneuver than he thinks, because his base would accept his word that some form of additional security along the border was the equivalent of a wall in terms of effectiveness.

“Listening to Rush Limbaugh and Ann Coulter on this is a mistake,” Mr. Ruddy said. “I don’t think the president’s base moves even one inch from him even if he doesn’t get a wall. They know where his heart is, they know where his mind is.”

Michael D’Antonio, a biographer of Mr. Trump, said the wall appealed to the builder and brander in him. “I think he hears the beep, beep, beep of a cement truck backing up and the product being poured and the wall rising,” Mr. D’Antonio said. “He can grasp that stuff. He loves it.”

It would be a presidential legacy that future generations could see and touch, an accomplishment that would last for ages. “I think he’d like it being called the Great Wall of Trump,” Mr. D’Antonio said, with a plaque to the president who built it “every mile or so.”

The simplicity of the concept made it a powerful sales pitch on the campaign trail. “It’s a four-letter thing,” Mr. D’Antonio said. “It’s an idea that can be expressed in a single word, and I think that has great appeal to him as a marketer. It’s sort of ‘crooked Hillary’ or ‘lock her up,’ but it’s even better.”

The Border Wall: How a Potent Symbol Is Now Boxing Trump In - The New York Times
Posted by John H Armwood II at 10:34 AM