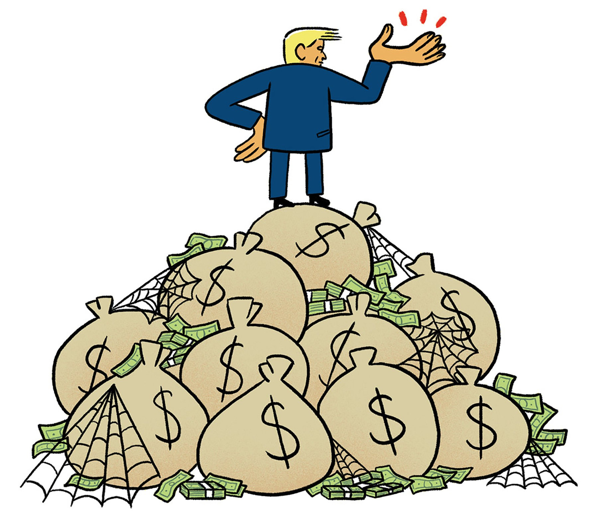 Giulia Sagramola
As the government shutdown over President Trump’s demand for border-wall funding moves through week three, the administration is looking to cut a deal with Democrats by emphasizing the deepening humanitarian crisis at the border — a crisis caused in large part by this administration’s inhumane policies, political grandstanding and managerial incompetence.

In a letter Sunday to lawmakers, the White House laid out its latest proposal for addressing the border tumult. The administration called for more immigration and Border Patrol agents, more detention beds and, of course, $5.7 billion to build 234 new miles of border wall. The White House also demanded an additional $800 million for “urgent humanitarian needs,” such as medical support, transportation and temporary facilities for processing and housing detainees.

Translation: Mr. Trump’s mass incarceration of migrant families is overwhelming an already burdened system that, without a giant injection of taxpayer dollars, will continue to collapse, leading to ever more human suffering.

The situation is an especially rich example of the Trump Doctrine: Break something, then demand credit — and in this case a lot of money — for promising to fix it.
Late last week, frustrated by his standoff with Democrats, Mr. Trump even threatened to declare a national emergency in order to get his wall built without Congress’s approval — a move guaranteed to prompt a ferocious legal challenge.

Any attempt to sell Mr. Trump’s cruel immigration agenda with a veneer of humanitarian measures should be viewed with skepticism. This administration has long held that the best way to deal with asylum seekers fleeing the horrors of their home countries is to increase their suffering upon reaching the United States to discourage others from even trying.

There is no question but that the administration remains ill equipped to cope with the fallout from its narrow fixation on deterrence. Migrant children are being piled into holding cells where they fall ill — or worse. The number of detainees at Immigration and Customs Enforcement facilities has swelled to unprecedented levels, requiring periodic mass releases. Without preparation or planning, hundreds of migrants are simply dropped off at bus stations in border cities. The Times found that, in the final week of December, some 600 migrants were unceremoniously released onto the streets of El Paso.

Mr. Trump’s spiteful choice to shut parts of the government is only making the situation messier. Immigration judges are being furloughed, further slowing the processing of asylum requests. Border Patrol agents are working without pay, eroding morale. In perhaps the choicest twist of fate, some $300 million in new contracts for wall construction cannot be awarded until the shutdown ends.

With Democrats now controlling the House, the president is right to assume that he will need a new negotiating approach. But the answer isn’t for lawmakers to throw good money after bad, or to try to prettify a retrograde agenda with humanitarian trimmings.
The Trump administration is asking Congress and the American public to embrace warped logic, that its policies are going to continue and that the only question is whether any money should be spent on measures to ease the suffering caused by those policies.

After two years of watching this administration run amok, surely Democratic lawmakers can come up with a better approach."