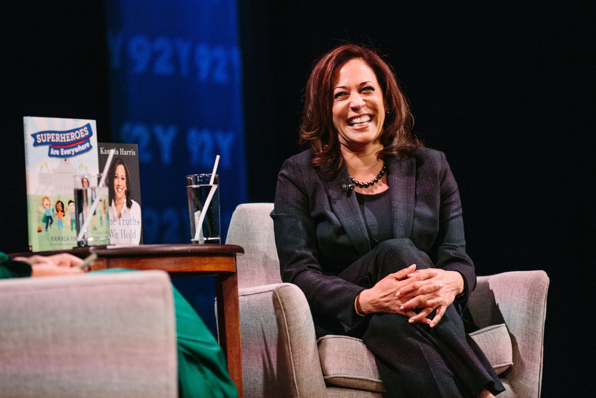 "If Senator Kamala Harris’s book tour is a preview of her likely presidential campaign, the early signs point to a catchall message meant for Democrats across the spectrum.

Speaking Friday night at the 92nd Street Y on New York’s Upper East Side, Ms. Harris covered many bases: her origin story from Oakland to Capitol Hill, what drew her into public life and the importance of voters “seeing themselves” reflected in the nation’s array of leaders. She cited her work to reform the juvenile criminal justice system in California as one of her biggest policy accomplishments. She talked about the necessity for Democrats to work in a bipartisan fashion while standing strong against a White House that many of their voters view as corrupt.

It was a broad, biography-heavy message — not a rigid ideological mantra — meant to lay groundwork for a national profile as she prepares a next possible step: joining a growing field of Democrats who will compete to take on President Trump.

“Anything worth fighting for is a fight worth having,” Ms. Harris said. “There is a democracy in place, and if we fight — maybe we won’t win all the time — but it will matter.”
But as some audience members noted after her remarks, and voters nationwide may learn soon, almost everything about Ms. Harris is more complex than it appears.

Though rated as one of the most liberal members of the Senate, Ms. Harris speaks less about Wall Street corruption and economic populism than do Elizabeth Warren and Bernie Sanders, two fellow senators who are also looking to a 2020 matchup against Mr. Trump. Ms. Harris has built a devoted following because of her Senate committee interrogations of Trump administration officials, but she remains disliked by some criminal justice activists who say her policies as California attorney general and San Francisco district attorney helped increase the state’s prison population.

Even her race and her life story — she is often described as one of two African-American women to have served in the Senate — are more textured in context: She has a Tamil Indian mother and a Jamaican father and spent some of her teenage years in Montreal.

Ava Leegant, a surgeon from San Francisco who came to the event skeptical of Ms. Harris’s presidential chances, said she left bullish about her appeal.

“I didn’t think someone from California could speak to all parts of the country,” Ms. Leegant said, “but I was impressed.”
“She’s my first choice to be my first choice,” said Betsy Kagen, a 33-year-old film editor who attended the talk.

The themes of Ms. Harris’s new book, “The Truths We Hold: An American Journey,” could help her stand out in a crowded Democratic presidential primary. More than a dozen candidates are expected to join the presidential race in the coming months, and as the party searches for its next iteration after two decades of dominance by the Clintons and Barack Obama, questions of policy, identity and tone in the campaign will be paramount.

Longtime strategists and admirers of Ms. Harris believe she is well positioned to create electoral coalitions among Democrats desperate to beat Mr. Trump, partly because she is not tethered to any one of the divergent and sometimes warring factions of the party. On MSNBC’s “Morning Joe” on Friday morning, Ms. Harris was asked, “Why would you want to be president?” and responded by citing the need for leaders who have a “vision of our country in which everyone can see themselves.”

“Her message of unity, that’s the key,” said Valoree Celona, a 50-year-old insurance executive who came to the 92nd Street Y with friends. “If she can get people to have that hope again, that’s what’s important. That’s what President Obama did.”

But Ms. Harris would also need to grapple with Democratic rivals who are more ideologically liberal and may try to move the debate to the left in ways that could force difficult choices for her.

Mr. Sanders, the Vermont senator and 2016 presidential candidate who is considering running again, has demonstrated an ability to shift conversation toward more populist themes like free public colleges and campaign finance reform. Ms. Warren, the Massachusetts senator who became the first major candidate to announce presidential intentions and head to Iowa, has drawn attention for challenging Democratic candidates to propose a more broad restructuring of American society that would address economic inequality. Ms. Warren rarely mentioned Mr. Trump on the campaign trail, and is pushing primary candidates to have a more policy-driven discussion.

“We need change,” Ms. Warren said at multiple stops during her Iowa trip. “And not just one statute here or one law there. We need big structural change.”
Sign Up for On Politics With Lisa Lerer
A spotlight on the people reshaping our politics. A conversation with voters across the country. And a guiding hand through the endless news cycle, telling you what you really need to know.
Rebecca Katz, a progressive political consultant based in New York who is not working for a 2020 candidate, said she believes that women and nonwhite candidates are scrutinized more than white male politicians, yet hopes that Ms. Harris will embrace bold ideas and tell more of her personal story even if it seems risky. Mo Elleithee, the former spokesman of the Democratic National Committee who now leads Georgetown University’s Institute of Politics and Public Service, said that much of the country is still unaware of Ms. Harris, and that she has time to refine a national narrative that resonates with many groups of Democrats.

Reviews of Ms. Harris’s book have been mixed, as critics have accused her of not adequately grappling with several controversial stances she took as California attorney general and others have characterized it as overly reliant on political clichés.

In the memoir, which was released simultaneously with a children’s book by Ms. Harris called “Superheroes Are Everywhere,” she repeatedly writes that she does not believe in “false choices.” This can mean both meaningful workers’ rights and a strong economy, she writes at one point, but she also applies the concept to police accountability and public safety.

“I know how hard it is for the officers’ families, who have to wonder if the person they love will be coming home at the end of each shift,” Ms. Harris writes. “I also know this: It is a false choice to suggest you must either be for the police or for police accountability. I am for both. Most people I know are for both. Let’s speak some truth about that, too.”

Sean Clegg, a longtime political adviser who is expected to play a senior role in any presidential campaign from Ms. Harris, said that if she ran she would discuss issues like income inequality, but that the message would be coupled with a call for partisan healing.

Paul Berkman, a 72-year-old New Yorker who attended the book talk, said he wished Ms. Harris talked about more policy ideas during her conversation, which was moderated by the poet Cleo Wade. Mr. Berkman said he left not knowing her answer to the “why-are-you-running-for-president” question every candidate faces.

“She seems like a likable person, but there’s so many candidates — I want someone to verbalize why it should be them,” he said.
Sarah Weiss, a 33-year-old book editor, said she was disappointed by Ms. Harris’s talk, especially after the heavy policy focus of Ms. Warren’s trip to Iowa.

“My concern is that she’s not liberal enough, and she talks in clichés that are kind of meaningless,” Ms. Weiss said of Ms. Harris. “She keeps saying there’s more that connects us than divides us, but at this time in politics, it seems like that’s not enough.”

At that point her friend Rachel Steinberg chimed in: “She is not running for president yet! She doesn’t need a platform.”

They agreed to disagree."