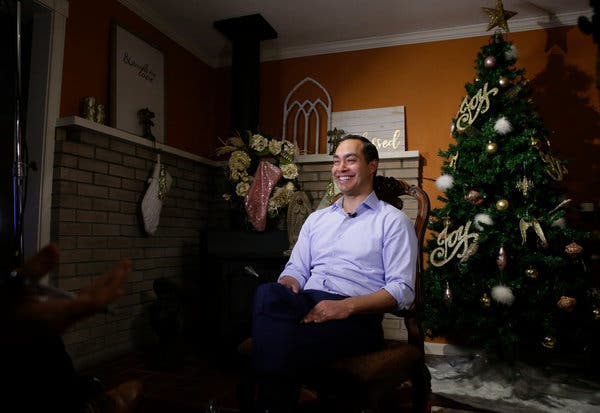 I’m listening for something arresting, a vision and a vocabulary that will rally and inspire.

Julián Castro talking about the possibility of running for president in 2020, at his home in San Antonio this month.

That much was clear on Thursday when I sat down with him and his identical twin brother, Joaquín, for an interview over dinner in a Midtown Manhattan steakhouse.

Julián, a self-described progressive, is the former secretary of the Department of Housing and Urban Development and the former mayor of San Antonio, who last week announced the formation of a presidential exploratory committee. Joaquín is a congressman in Texas who would be Julián’s campaign chairman.

When we begin the interview, Castro is careful with his answers nearly to the point of being cagey. You can see him doing the calculations in his head, trying not to overstate a position or appear too absolute on a topic that he has not fully considered.

Can a sitting president be indicted?

“Well, I think we’re going to find that out.” Later he adds, “I know what I hope. I hope we can bring anybody to justice.”

Do you believe that Trump should be indicted?

“I believe the walls are closing in on him.”

If you were president and prosecutors attempted to prosecute a then former President Trump, would you pardon him as Gerald Ford did for Richard Nixon?

“That is a tough decision. My inclination is to say no, that I would not, but I think some of that also depends on where we’re at as a country.”

But, as the dinner wears on, he loosens and his quickness to laugh emerges. He dispenses with the knife and fork he has been using to negotiate his roast chicken and, in a move that would have made Emily Post squirm but makes me smile, he hoists it with his hands. He is comfortable now, and this man I like: imperfect but not impertinent. Human. Relatable.

We discuss Castro’s rather standard Democratic stances on major issues: in favor of common-sense gun regulations, wants to roll back the Trump tax cut, and wants to take a multinational approach to the issues driving Trump’s tariffs. He’s in favor of universal pre-K, free public college across the board, and Medicare for all.

I’m listening for something enlightening, something arresting, a vision and a vocabulary that will rally and inspire. It never fully manifests. He talks of summoning a “common sense of purpose, of common national identity.” He chides Donald Trump’s divisiveness and churlishness. But somehow, it all flattens for me. I’m too familiar with the framing.

And yet, there is something genuine about Castro, a nice guy who made it. He’s not straining to impress, and that, in and of itself, is impressive.

Because Castro’s relative youth is so apparent in his appearance and comportment, it occurs to me that if elected, Castro, who is now 44, would become one of America’s youngest presidents. And this gives me pause. There is a young man’s ease and airiness about Castro, a disarming charm that arrests the attention because of its counterintuitiveness, but I struggle to imagine it in the Oval Office.

Thinking about the campaign, too, it is hard to imagine Castro in a bare-knuckled brawl with Trump and the Republicans.

For instance, how would he respond when confronted with what he told The New York Times Magazine in 2010? “Joaquín and I got into Stanford because of affirmative action,” Castro told the magazine. “I scored 1210 on my SATs, which was lower than the median matriculating student. But I did fine in college and in law school. So did Joaquín. I’m a strong supporter of affirmative action because I’ve seen it work in my own life.”

Trump would have a field day with this.

It is important to note here that Castro is unlikely to be the only young candidate this cycle. Indeed, there may be a whole raft of hopefuls in their 40s, and even 30s, who throw their hats into the ring.

But youth has a way of making itself known, of peeking through the curtain of the mature persona one tries to craft.

Castro’s first task is to secure the nomination. One could see a scenario in which this Southern Hispanic would have particular advantages on the primary calendar, but it remains to be seen how an incredibly diverse party will respond to an incredibly diverse slate of candidates. Will people hew to tribalism and regionalism in their choices, or will those things be of little consequence in the end?

Castro has been talked about for years as a rising star in the Democratic Party, one who could someday become this country’s first Hispanic president.

One question for me is whether this is that moment for Julian, or if interest in him peaked before his opening appeared. There are now other stories and educational pedigrees just as compelling as Castro’s and they are attached to people with higher profiles, access to more donors and, quite frankly, more of a craven desire to rise to power.

This nice guy may not always finish last, but can he come close enough to the top in Iowa and New Hampshire to confirm his viability?"

Opinion | Julián Castro and the Cordial Candidacy - The New York Times
Posted by John H Armwood II at 5:31 AM