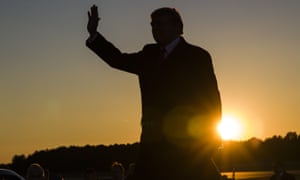 "While a government shutdown and a key resignation grabbed headlines, diplomats were stunned by US actions over Yemen

The defense secretary, James Mattis, handed in his resignation on Thursday, over Donald Trump’s abrupt decision to pull US troops out of Syria. On Saturday another senior official joined the White House exodus. Brett McGurk, the special envoy for the global coalition to defeat Isis and the US official closest to America’s Kurdish allies in the region, was reported to have handed in his resignation on Friday.

That night, senators flew back to Washington from as far away as Hawaii for emergency talks aimed at finding a compromise on Trump’s demand for nearly $6bn for a wall on the southern border, a campaign promise which has become an obsession. The president tweeted out an illustration of a very pointy, very high metal fence which he called “our Steel Slat Barrier which is totally effective while at the same time beautiful!”

Earlier in the week, it appeared a deal had been reached to allow the funding of normal government functions into the New Year. But Trump abruptly changed his mind, most likely after watching rightwing pundits criticise the fudge on television.

The immediate consequences were that 380,000 federal workers were placed on compulsory unpaid leave and another 420,000 would have to work through the holidays unpaid. About a quarter of government functions ceased for lack of funding. On Saturday the Senate adjourned without a solution, ensuring the shutdown will continue until Thursday at the earliest.

Trump was left to brood alone in Washington. The first lady, Melania, and their son, Barron, flew off on Friday to Mar-a-Lago, the president’s private club in Florida.

“I am in the White House, working hard. News reports concerning the Shutdown and Syria are mostly FAKE,” the president tweeted.

Trump has been spending an increasing amount of time in his private quarters, appearing for work in the Oval Office later and later in the morning. His aides call it “executive time” but it is clear from his Twitter feed it is mostly spent watching TV and responding viscerally to what he sees and hears.

With the departure of two retired generals, the chief of staff John Kelly and the defense secretary James Mattis, the administration has lost two war veterans not afraid of standing up to Trump. In 2019, that insulation between Trump’s impulses and the rest of the world will no longer be there."