The Long, Entwined History of America First and the American Dream | The Nation 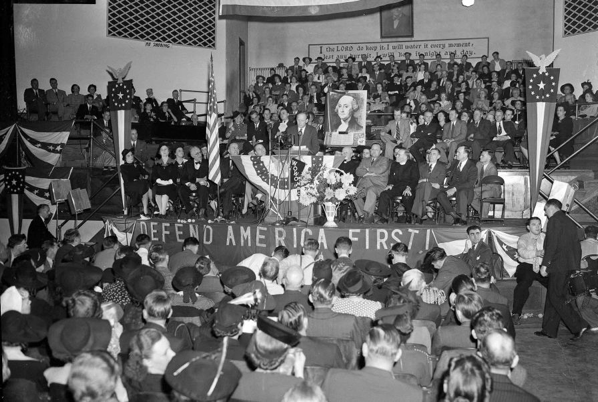 "Whenever Trump and his allies rally around that phrase, pundits have been quick to point out that it originated in the isolationist movement before the Second World War. To be sure, the America First Committee popularized the saying in its campaign to keep the United States out of another “European war,” with celebrity pilot Charles Lindbergh serving as its spokesman and conservative publisher William Randolph Hearst throwing his weight behind it: The slogan “America First Should Be Every American’s Motto” soon ran across the masthead of every newspaper he owned. But as Churchwell writes, the isolationists’ campaign represented not the birth of “America First,” as many have claimed, but its death. (Or, at least, its death until Trump resurrected it.)

The phrase had appeared more than half a century before World War II to assert American independence and isolationism. By the mid-1890s, the Republican Party had adopted it as a campaign slogan: “America first; the rest of the world afterward.” The term appeared sporadically over the next few decades before emerging as a national catchphrase during the First World War, beginning with President Woodrow Wilson’s 1915 declaration that “our whole duty, for the present, at any rate, is summed up in the motto: ‘America First.’” Indeed, the phrase proved so popular that both parties’ candidates claimed it in 1916. Republican nominee Charles Evans Hughes ran on a slogan of “America First and America Efficient,” while Wilson stuck with the more efficient “America First.”

While the slogan called for isolationism in foreign affairs (a policy that Wilson would soon abandon in 1917), it also signaled a similar retreat from cosmopolitan politics at home. As the United States drifted into the First World War, nativists increasingly became concerned over the “hyphenates” in their midst: those who called themselves German-American, Irish-American, Italian-American, and the like. It was time, Wilson insisted in 1915, for every immigrant “to declare himself, where he stands. Is it America first or is it not?” Less than a decade later, the United States embraced drastic restrictions on immigration through the National Origins Act of 1924. As a Republican supporter in Congress explained, the policy simply reflected “the doctrine of America first for Americans.”

Not surprisingly, the Ku Klux Klan employed “America First” in much the same way, using it to demand nothing less than “100% Americanism”—which for the group meant 100 percent white Americanism. In 1921, a circular listed the “ABCs” of the KKK: “America first, benevolence, clannishness.” While the Klan was often called the “American Fascisti” during this era, the same arguments were advanced by more openly fascist organizations like William Pelley’s Silver Shirts, an American counterpart to Mussolini’s blackshirts and Hitler’s brownshirts. “The various colored shirt orders—the whole haberdashery brigade who play upon sectional prejudice—are sowing the seeds of fascism,” the writer James Waterman Wise warned. “It may come wrapped in a flag or a Hearst newspaper,” he added, with “America First” on the masthead.

The use of the two phrases came to a head with the advent of World War II. As Churchwell writes, the America First Committee used the exceptionalism of the American dream to argue for isolation from the rest of the world. “Americans! Wake Up!” one of the group’s ads implored. “In 1776, three million Americans dared to sign a Declaration of Independence, unsupported by any foreign navy, unafraid of any foreign economy. And the ‘American Dream’ was born.”

But even as the two phrases came together, they were soon riven apart. Weeks after Pearl Harbor, the America First Committee folded, with Lindbergh and its other leaders promising support for the coming conflict. While some Americans, a newspaper noted, were “still America Firsting” during the war, the phrase and the isolationist policies it represented quickly fell out of favor. By the end of the war, both had been largely discredited."

The Long, Entwined History of America First and the American Dream | The Nation: