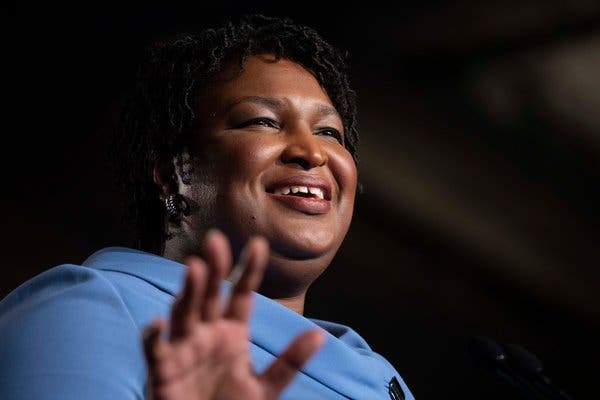 Saying what should be obvious but has not been too far too many Democrats:

"Learning the right lessons from the 2018 midterms is key for the party as it looks ahead to the 2020 elections.

Mr. Phillips is the author of “Brown Is the New White: How the Demographic Revolution Has Created a New American Majority.”

Andrew Gillum and Stacey Abrams, progressive African-American Democratic candidates, may not have won their races for governor in Florida and Georgia (both are still too close to call). But the strategy they followed is still the best strategy for Democrats to win: inspiring, mobilizing and turning out voters of color and progressive whites.

I’ve argued for this strategy for years. In my 2016 book, I analyzed Barack Obama’s victories in the context of the country’s changing demographics. The implications of the Gillum and Abrams races are profound (to be clear, I did fund-raising for the efforts to elect both Ms. Abrams and Mr. Gillum, just as I did for Mr. Obama in 2008), and learning the right lessons from 2018 is key for Democrats as they look ahead to the 2020 elections.

Over the past 20 years, the best-performing Democratic candidates in statewide elections in Florida and Georgia have been Mr. Obama, Mr. Gillum and Ms. Abrams. (Hillary Clinton in 2016 was actually Florida’s highest Democratic vote-getter ever.) This year, Ms. Abrams dramatically increased Democratic turnout, garnering more votes — 1.9 million — than any other Democrat running for any office in the history of Georgia (and that includes Jimmy Carter, Mr. Obama and Mrs. Clinton).

Conventional wisdom dictated that both Mr. Gillum and Ms. Abrams did not give Democrats their best chance; more traditional, moderate white candidates were seen as the most competitive. In this view, moderate candidates can better appeal to and win over “swing” white voters.

Midterm results laid bare the fallacy of that view. In Missouri, Claire McCaskill, the incumbent Democratic senator, lost to Josh Hawley by six percentage points, 45.5 percent to 51.5 percent. Senator McCaskill campaigned by highlighting her moderate credentials and ran a radio ad distancing herself from her party: “Claire’s not one of those crazy Democrats,” a narrator said. “She works right in the middle and finds compromise.”

In Tennessee, Phil Bredesen, the state’s former governor, lost his bid for the Senate by over 10 points despite his attempt to peel off Trump supporters by coming out in support of Brett Kavanaugh’s confirmation to the Supreme Court.

Or go back to the 2014 Georgia election results. The strategy of wooing supposedly moderate whites was put to the ultimate test when Democrats fielded nominees from two of the most prominent Democratic families in the history of Georgia — the Carters and the Nunns. Jimmy Carter’s grandson Jason Carter ran for governor, and former Senator Sam Nunn’s daughter Michelle Nunn ran for Senate. Together their campaigns spent more than $20 million, pouring enormous sums into television advertising seeking to persuade moderate whites to back their bids.

Or look at last year’s special election in Georgia’s Sixth District. Historic sums of money were raised and spent, and the Democrat, Jon Ossoff, still lost to Karen Handel. This year, riding the swell of turnout inspired and organized by Ms. Abrams, the Democrat Lucy McBath flipped that seat.

Clearly success required a different strategy. Ms. Abrams and Mr. Gillum embraced the Obama playbook for winning elections: It starts with emphasizing mobilization over persuasion. Ms. Abrams’s campaign defied conventional wisdom by spending early and big on a vast mobilization effort that involved calling, texting and knocking on the doors of nearly 600,000 infrequent Georgia voters a full year before the election.

Mr. Gillum took a similar approach and was buoyed by the backing of organizations such as New Florida Majority, which hired community-based canvassers to knock on tens of thousands of their neighbors’ doors to identify and mobilize Gillum supporters long before the rest of the country caught on to his candidacy.

These campaigns laid the groundwork for future Democratic success, because the thousands of volunteers, operatives and new voters will pay dividends for the 2020 Democratic nominee.

Mr. Gillum and Ms. Abrams did exactly what Mr. Obama did: They inspired people across the racial spectrum to participate and vote, and they did it by being unapologetically progressive. They did not shy away from championing Medicaid expansion, pursuing criminal justice reform and promoting gun control policies.

Does this strategy require a candidate of color? No, but it does call for candidates who can inspire voters of color. Beto O’Rourke in Texas is an excellent example, and his inspiring and well-organized campaign brought him closer to winning statewide than any Democrat has come in Texas in years. And nationally, the Democrats reclaimed a majority in the House by winning in nearly a dozen districts with large populations of voters of color.

Ms. Abrams and Mr. Gillum were also not afraid to tackle the not-so-silent racist “dog whistles” emanating from their opponents and the president. Ms. Abrams refused to shirk from condemnation of racism and condemned the ways in which honoring racist imagery like the Confederate monument at Georgia’s Stone Mountain monument — called out by name in Rev. Dr. Martin Luther King Jr.’s “I Have a Dream” speech — undermines democracy and distances entire groups from being part of the body politic. Mr. Gillum offered one of the greatest lines in the history of American politics when he offered, about his opponent, Ron DeSantis, during a debate: “I’m not calling Mr. DeSantis a racist. I’m simply saying the racists believe he’s a racist.”

Notably, this approach of tackling racism head-on is also the best way to woo many white voters. According to the exit polls, both Ms. Abrams and Mr. Gillum received more support from whites in their states than either Mr. Obama or Mrs. Clinton did. White people — all people — want to believe in something. Challenging them to reject racism and embrace their highest and best ideals is the most effective way to secure their support.

Yes, the strategy of mobilizing voters of color and progressive whites is limited by the demographic composition of particular states. But what Mr. Obama showed twice is that it works in enough places to win the White House. And that is exactly the next electoral challenge.

Democrats can go the old route that has consistently failed to come close to winning and demoralized supporters down the line, or they can do the math and follow the example of Ms. Abrams and Mr. Gillum and Mr. Obama before them. Invest in the infrastructure and staffing to engage and mobilize voters. Stand as tall, strongly and proudly for the nation’s multiracial rainbow as Mr. Trump stands against it. And mobilize and call forth a new American majority in a country that gets browner by the hour and will be even more diverse by November 2020.

Steve Phillips, the founder of Democracy in Color and a senior fellow at the Center for American Progress, is the author of “Brown Is the New White: How the Demographic Revolution Has Created a New American Majority.”