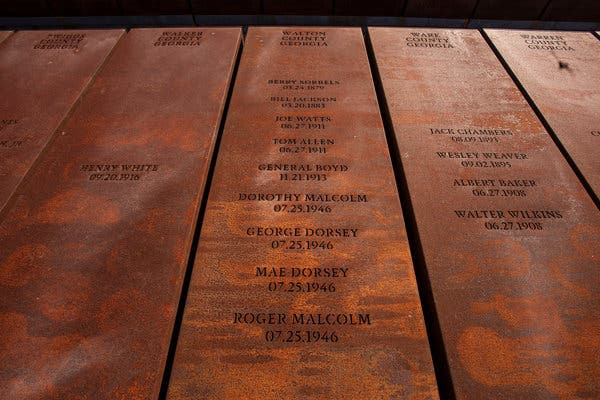 "A federal appeals court should release records of a grand jury that held no one responsible for a 1946 Georgia horror.

“The best people in town won’t talk,” a Georgia state trooper said after the white citizens of Walton County, embracing the Jim Crow code, pleaded ignorance about the mob that murdered two African-American couples in 1946, shooting them numerous times at point-blank range.

President Harry Truman ordered an extensive F.B.I. investigation of this horror, known as the Moore’s Ford Bridge lynching, America’s last mass lynching. More than 100 people were summoned to a grand jury that failed to indict anyone in the deaths of George W. Dorsey, his wife, Mae Murray Dorsey, and Roger and Dorothy Malcom (sometimes spelled Malcolm). The murders, like virtually all lynchings, remain unsolved.

The grand jury records were presumed lost until last year, when the historian Anthony Pitch located them in the National Archives and persuaded a federal judge in Georgia to order them unsealed. The judge ruled, in accordance with precedent, that the testimony was of broad public interest and presented no threat to suspects and grand jurors, all of whom are thought to be dead.

The Justice Department appealed, though, arguing that the records do not meet the requirements for disclosure. But the United States Court of Appeals for the 11th Circuit, which heard arguments last week, has approved the unsealing of grand jury records in the past. It should be able to do so again, affirming the lower court, since these records clearly belong in the public sphere.

The Moore’s Ford Bridge case was a signal episode in the reign of racial terror in which thousands of black men, women and children were hanged, drowned, shot, burned or dismembered in states across the South between the end of Reconstruction, in 1877, and the dawn of the modern civil rights era, in 1950. The victims were often killed before cheering crowds without being charged with crimes and for minor transgressions like talking back to whites, competing with them in business or insisting on the right to vote.

Mr. Malcom was accused of stabbing a white man, but George Dorsey committed another offense to these thugs. He was a veteran who had recently returned from five years of service in the Pacific during World War II. A 2016 study by the Equal Justice Initiative, a civil rights organization, noted that black veterans who dared to appear in uniform on Southern streets were a particular threat to a system that insisted on black subservience.

The study noted that whites especially feared that “meeting black veterans’ demands for respect would lead to postwar economic demands for better working conditions and higher wages and would encourage other African-Americans to resist Jim Crow segregation and racially oppressive social customs.” African-American veterans were singled out for assault and other forms of persecution.

Some historians have traced the Moore’s Ford Bridge murders to Georgia’s hate-filled 1946 Democratic Party primary for governor — the first after a federal court invalidated the all-white primary system, allowing African-Americans to vote. Eugene Talmadge race-baited throughout the campaign, essentially promising to reinstate the whites-only system and warning white voters that if black people were allowed to vote, they would overturn laws requiring segregation in schools, trains and hotels. As Laura Wexler shows in the book “Fire in a Canebrake: The Last Mass Lynching in America,” Mr. Talmadge visited Walton County just a few weeks before the election and ominously warned Negroes “to stay home and not attempt to vote.”

So race hatred was inflamed in July of that year, when Mr. Malcom was charged with stabbing a white farmer during a fight. A white landowner for whom the Malcoms and the Dorseys sharecropped was driving the couples back to his farm after posting Mr. Malcom’s bond when a mob seized the four African-Americans, tied them to a tree and riddled their bodies with bullets.

Members of the mob wore no masks, but the farmer said he could not identify any of them. Black sharecroppers, who were virtually owned by white farmers for whom they worked, were terrified to say if they had seen anything.

As J. Edgar Hoover, the F.B.I. director at the time, later said: “The arrogance of the … white population was unbelievable and the fear of the Negroes was almost unbelievable.” Despite Mr. Hoover’s disgust at the white wall of silence, Ms. Wexler says, the F.B.I. failed to vigorously pursue crucial evidence showing that the local sheriff had known of the threats to Mr. Malcom’s life before the lynching and had taken no steps to protect him.

In the end, she wrote: “Twenty-five F.B.I. agents, four months of investigation, 2,790 people interviewed, 106 people subpoenaed before the grand jury — and then no indictments. The federal government had responded to the worst incident of racial violence since the end of World War II with the most massive lynching investigation in the country’s history. And yet there was still no justice.”

The last mass lynching of the 20th century continues to haunt Walton County, even though the principals are dead. Local activists still re-enact the lynching, to keep it in the public eye. As recently as a few years ago, a white man in his 50s accused an uncle of being involved and said he had grown up hearing about the case.

The grand jury transcript is unlikely to solve the mysteries of this 72-year-old case. But the courts have an obligation to make sure the public knows all there is to be learned about this horrifying episode."

Opinion | A Last Hope for Truth in a Mass Lynching - The New York Times
Posted by John H Armwood II at 12:02 AM