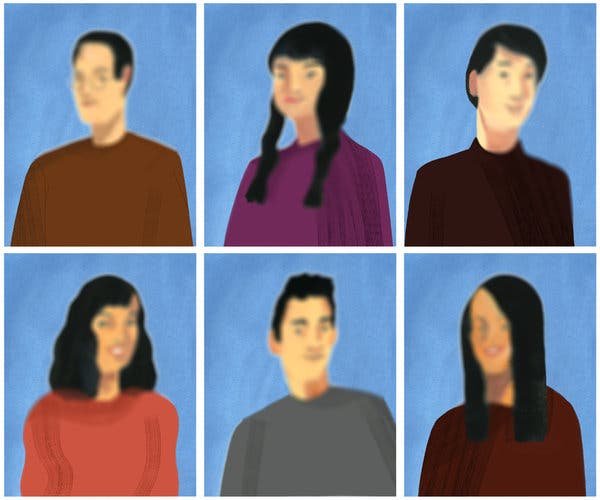 "We’re mistaken for each other, but we’re not mistaken about ourselves.

Ms. Ko is a novelist.

“I’ve got your letter here, Christina.”

My high school guidance counselor gave me a college recommendation for a girl named Christina Chin. I’d been meeting with him for four years. There were fewer than 20 Asian-Americans in my New Jersey public high school of about 700 students, and our teachers frequently mistook us for one another. One of my teachers, who lived near me and had known me since I was a child, received a call during class one day and said I was wanted in the principal’s office. When I arrived, the principal said he’d called for a student named Jane Tawara.

“I’m Lisa, not Christina,” I told my counselor, though later I joked that I should have passed for Christina. She had better grades.

On Monday, in Federal District Court in Boston, plaintiffs will argue that Harvard discriminates against Asian-American applicants. This lawsuit contends that the school gives these applicants lower scores for personality traits like “humor” and “grit” and that it rejects qualified Asian-Americans in favor of African-Americans and Latinos. The case, which has been supported by the Justice Department and led by an anti-affirmative action group called Students for Fair Admissions and a group of Asian-American applicants who were rejected by Harvard, has the potential to threaten all colleges that consider an applicant’s race in the admissions process. Eliminating race as a consideration in admissions would cause egregious harm to people of color, including Asian-Americans.

As I read about this lawsuit, I am reminded of my own college application experience, in the mid-1990s. At the heart of my anger at being seen as interchangeable with other Asian-American students — and later, at being mistaken for other female Asian-American co-workers in every job I’ve had — was that we were seen as lacking individuality, and by extension, humanity. My exchange with the guidance counselor was far from the first time this happened, but it still stung: You are invisible. You don’t matter.

This narrative is a familiar one in our Asian-American lexicon. My parents, Chinese immigrants from the Philippines, came to the United States on student visas in the 1960s. The first in their families to attend college, they met in New York City and sponsored their siblings’ migration to North America. They moved from the city to a middle-class white commuter suburb and raised me there. For many children of immigrants who came to the United States as beneficiaries of the 1965 Immigration and Nationality Act, our origin stories have centered on our relationships to whiteness and class assimilation. We’re too American, or not American enough. We’re tired of this story being the dominant one.

In high school, I internalized anti-Asian stereotypes by rejecting them. I was bad at math and science. I liked art and film. We didn’t all look the same, and I was Not Like Them — not like the Asians who would go to Ivy League schools and be pre-med. But as Mark Tseng-Putterman has written, this fervent insistence at being the “right” kind of Asian is still invested in a preoccupation with how others see us.

The 1965 law gave preference to highly educated Asian immigrants, which then gave rise to stereotypes of Asians as more economically successful than other people of color in the United States because we supposedly work harder and have stronger educational values: the model-minority myth leveraged by both whites and Asians to justify racism against blacks and Latinos. It’s a stereotype that is harmful and myopic, used to erase larger truths about systematic racism and unjust policies. It’s also false. In recent years in New York City, Asians have consistently ranked as the minority group with the highest poverty rate.

While Asian-Americans have benefited from affirmative action, we continue to be used as a strategic tool by white conservatives who are opposed to it. The anti-affirmative action lawsuit against Harvard is a result of a campaign by the conservative strategist Edward Blum, who was also responsible for Fisher v. University of Texas, as well as a lawsuit that resulted in gutting the Voting Rights Act.

Ethnocentric views of “Asian pride” can be seductive for those who have historically felt disempowered. To acknowledge our collective anger and pain, how we are both targeted by racism from whites and perpetuators of racism against blacks and Latinos, may feel vulnerable and dangerous.

My family’s story is far from being the only kind of Asian-American story, though it’s the one that has largely been told, particularly in mainstream media. That’s partly because of who has access to that media and partly because it’s a story white Americans feel more comfortable with, because it still puts them at the center.

There are pitfalls to hearing — or investing in — only one type of story. Though the Asian-American population increased by 72 percent from 2000 to 2015 and is continuing to rise, on track to become the largest immigrant group in the United States by 2055, we’ve been here since the 18th century. We have been driven from towns, banned and interned; and we continue to be incarcerated, profiled, murdered and deported at alarming rates. The touted success of the model minority has not resulted in true political or cultural power. Asian-Americans remain scapegoats for economic anxieties, from the immigrants blamed for taking away good-paying jobs from white Americans to the Asian students blamed for taking college acceptance spots away from white students.

Asian-American, a political identity formed in the 1960s and consisting of Americans with roots in more than 20 countries, is a label that can be both empowering and exclusionary. Asian-Americans aren’t just East Asian, heterosexual and middle class. They’re queer and working class and poor and undocumented;South Asian and Southeast Asian and Filipino and Central Asian. A narrow definition of Asian-American does a disservice to all of us.

Asian America is changing. While new immigrants continue to expand our communities, so do the grandchildren of post-1965 immigrants, born to parents who were also born in the United States. Will these third-generation Asian-Americans be less concerned with the white gaze — with the guidance counselors and college admissions officers who refuse to see them fully — than previous generations have been?

Mari Matsuda wrote in 1996 about how important it is for Asian-Americans to resist becoming what she calls the racial bourgeoisie. We can choose, falsely, to believe that if we try hard enough, we’ll be accepted by whiteness and gain its privileges, at the expense of other people of color — the myth of exceptionalism. Or we can work to be in solidarity across racial, ethnic and class differences, to refuse to be used to uphold white supremacy.

By looking more closely at our history, at what we have gained and at what and whose expense, we can better inform our futures. Bobby Jindal and Nikki Haley may be prominent Asian-American Republicans, but our political histories are shaped by activists like Larry Itliong, Grace Lee Boggs, Yuri Kochiyama and Pauline Park. Our Asian-American future is also informed by our present: all-Asian suburbias; multiethnic Chinatowns; success that’s less defined by Hollywood representation and the breaking of the corporate ceiling and more by pushing for equity for all Americans, not only a select few. As America moves away from whiteness as its norm, it’s crucial to imagine, and fulfill, our own radical futures.

Home on break from college, where I was receiving a new sort of political education, I told my parents they were wrong about who we were. We were Asian-American, not Asian, and we were definitely not Oriental.

“We’re not American,” they said. “We’re Asian.” At least they didn’t laugh me out of the house for my arrogance.

“Asian-American,” I said. “Not Asian Asian.”

That was more than 20 years ago. On a recent visit to New Jersey, I asked my parents, former Reagan Republicans turned staunch Obama Democrats who voted for Bernie Sanders in the 2016 primary, if they felt American now that they’ve been in the United States for half a century.

“Of course,” my mother said. “What else would I be? Even though other Americans don’t see me as American.”

“Well, who cares how they see us,” my father said. “They can think what they want, but it doesn’t matter to me.”

I hope he’s right. Regardless of how we are seen by others, we are the ones who can best see ourselves.

Lisa Ko (@iamlisako) is the author of the novel “The Leavers.”

Opinion | Harvard and the Myth of the Interchangeable Asian - The New York Time
Posted by John H Armwood II at 6:13 AM