Opinion | Count Me Among the Mob - The New York Times 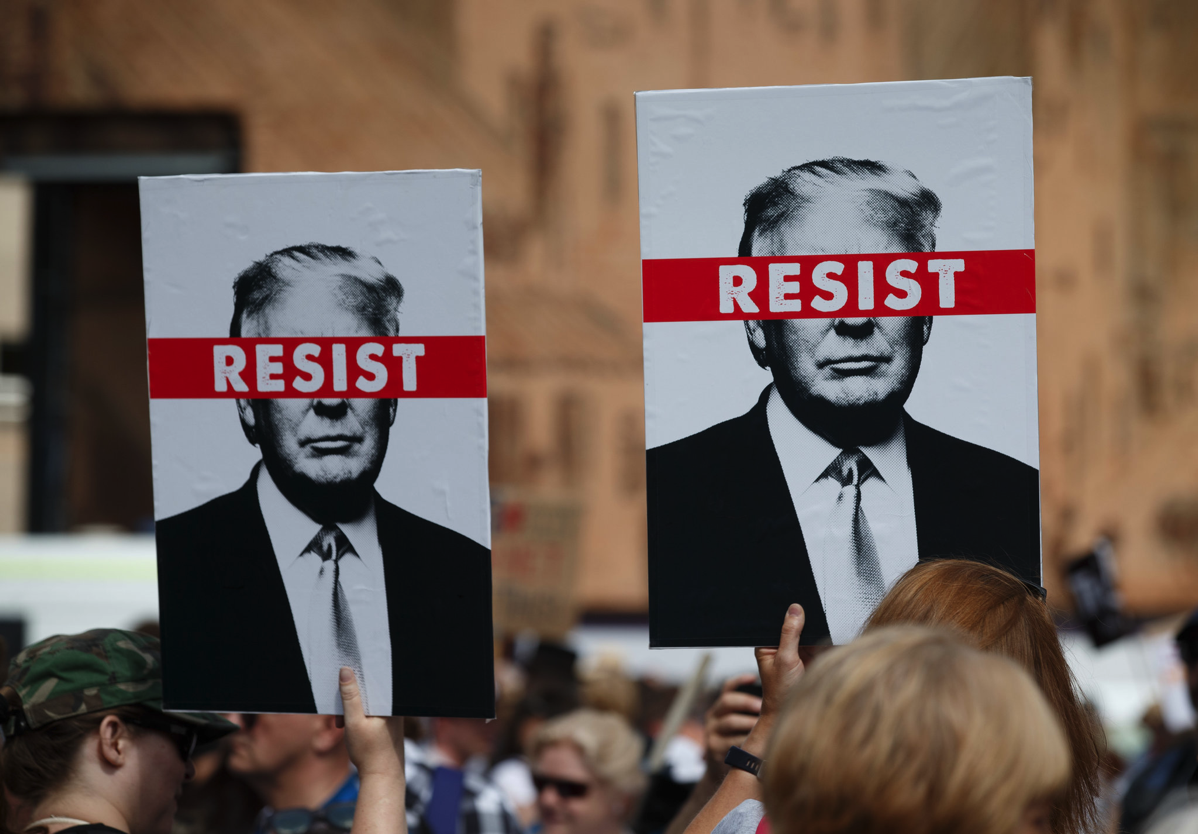 #ResistanceIsNotFutile
"Resist, If it means people who stand in opposition to Trump’s degradation of the country.

Oct. 21, 2018
...One thing that I find profoundly disappointing about modern liberalism, particularly as it now stands in opposition to Trumpism, is the degree to which it is reactionary, governed by what is being done to it rather than its own positive vision.
It is true that Donald Trump is not only antithetical to liberal values, he is antithetical to most American values, and as such limiting his power and limiting the duration of his tenure are of paramount concern and absolute urgency.
Therefore, resisting what Trump represents becomes a central point of moral rectitude and ultimate patriotism. Resistance is a reaction to Trump.
But that can’t be the sum total of one’s statement of principles. You must be driven toward a concept of what you want this country to become, and not just driven by a fear of what the country could descend into.
Liberal enthusiasm can’t hinge solely on prospects for overwhelming victory due to conservative lethargy. Enthusiasm can be a highly fluctuant variable in a political cycle. The only enthusiasm you can control is your own.
All campaigns are to some degree an act of public manipulation, hopefully to the good, but often to the ill. There are two ways to drive turnout: excitement or incitement. Voters can either be animated by hope or fear, optimism or angst.
Trump’s default position is the use of fear. Scared about his prospects should Democrats take control of both the House of Representatives and the Senate, Trump is campaigning like crazy, trying desperately to stir his base to action, and he knows that the easiest way to do that is to stoke its anger, to appeal to the same misogyny, racism, nationalism and insecurity that carried him to the White House.
In campaign stops, he keeps saying that he’s on the ticket, that these state and local elections are not about the individual candidates but about him, his supporters and whether or not the dark vision of a diminished America that he has ushered in will survive.
Last week he debuted new talking points, saying that this will be an election about “Kavanaugh, caravans, law and order and common sense.”
First, the defense and championing of Justice Brett Kavanaugh after publicly attacking, discrediting and diminishing the women who accused him of sexual assault is to me a clear expression of misogyny. Trump has a habit of not believing the women who accuse powerful men of sexual assault, a position that probably comes naturally to him because he was accused himself.
Second, Trump is trying desperately to elevate immigration as a burning issue again, focusing his fire on a caravan of immigrants from Central America plodding northward toward the U.S.
This is an easy target for Trump and his base because it encapsulates a sentiment without expressly articulating it: America is being invaded and overrun by people who are not white and not European, which risks the maintenance of American heritage, which is white heritage. White people’s control of this country is in danger and under assault and must be defended and protected at all costs.
But rather than ever using words like white supremacy and white nationalism, he uses proxies, like law and order, border walls and infestation.
And he now wants to cast liberals and Democrats as mobs, saying Democrats produce mobs while Republicans produce jobs.
Well, count me among the mob, if that means people who stand in opposition to Trump’s degradation of the country in all ways. If the mob stands up for women and stands up to the National Rifle Association, I want in. If the mob hates corruption and loves the increasing diversity of this country, then it is for me. If the mob finds it abhorrent that during the same week that it became clear that a Washington Post columnist had been killed in a Saudi Arabian consulate, Trump praised an American politician who assaulted a journalist, then yes, yes, yes to the mob.
Make no mistake: Trump’s strategy will work. He now knows the people who support him very well. He has never stopped playing to them and campaigning for them. They are family. They feast together on hatred and intolerance.
But none of that should dampen liberal enthusiasm or soften liberal resolve. What we want this country to be cannot be subject to the whims of Trump and his base.
This election and indeed all that follow it must no longer be about reactions, but about realignment.
We must conceive of the country we want and drive relentlessly toward it, not because we are thunderstruck by the sheer immorality that has risen to the pinnacle of power, but because we know that power is in fact a possession of the people in a democracy and we can both harness it and assert it.
Trump is going to be Trump. Stop playing by his rules. Don’t allow him to dictate the terms of the debate. Let him call you whatever he likes. If he says you are part of a mob, so be it.
Stay focused on the future. It belongs to an America that looks absolutely nothing like Trump’s America. Vote!
Charles Blow joined The Times in 1994 and became an Opinion columnist in 2008. He is also a television commentator and writes often about politics, social justice and vulnerable communities.
Opinion | Count Me Among the Mob - The New York Times
Charles Blow joined The Times in 1994 and became an Opinion columnist in 2008. He is also a television commentator and writes often about politics, social justice and vulnerable communities.
Posted by John H Armwood II at 5:51 AM