In Amazon Go, no one thinks I'm stealing - CNET 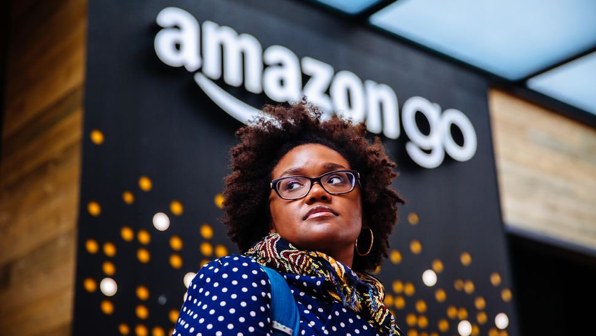 "I was still in pigtails and barrettes when my mother told me the rules of shopping.
Don't touch anything. Don't put your hands in your pockets. When you get old enough to carry a purse, don't dig through it while you're in the store. Always get a receipt. Always get a bag.
I thought she was overreacting. I just wanted to get a Berenstain Bears or Little Critterbook from the magazine-and-school-supply aisle at Kroger, or a Barbie from the Toys R Us on our end of town. I knew I wasn't supposed to misbehave in public, especially when we were in a store, or I wouldn't get a special treat during our shopping trips. But I was too young to realize that my mother wasn't paranoid; she was just trying to protect me from a world that isn't always kind to black people.
This conversation about how I was supposed to conduct myself in stores is one that has taken place in many an African-American household. It's a similar version of the talk we have with our children about how to conduct yourself during interactions with police. I learned at an early age that I would be perceived as a thief the moment I walked into an establishment, and the onus was on me to mitigate the situation by policing my own behavior.
The lessons my mother taught me boiled down to a simple objective: Don't give retail employees any more reason to suspect you of stealing than they already have, because if they do think you've stolen something, even if they're wrong, no one will believe you. My mother didn't have the phrase "implicit bias" to explain how people could have biases against me that are so deeply rooted in the subconscious that they don't even realize that they're prejudging me. Yet she knew that these attitudes existed and that it was her job to protect me from harassment, arrest or worse.
This isn't paranoia: shopping while black is real. We get profiled as soon as the door chimes and announces our arrival in a store. Oscar-winning actor Forest Whitaker was once falsely accused of shoplifting and patted down in a store on the Upper West Side of Manhattan. A store associate in Switzerland wouldn't let Oprah, the billionaire media mogul, see a handbag because she thought Oprah wouldn't be able to afford it. Ninety-two percent of African-Americans said discrimination against black Americans exists today, according to a 2017 study commissioned by NPR.
And with black people being harassed, attacked and killed for doing regular stuff -- having a barbecue, sitting in a car, chilling in their own apartment -- it's not too wild of a notion to believe that shopping can be dangerous, too. (I'd be remiss if I didn't mention that two black people were killed in a Kroger in Louisville, the city in which CNET Smart Home is based, in an attack that could be racially motivated.)
There are no cashiers at Amazon Go stores -- you just walk out with your stuff, and the store charges you through an accompanying app.

I've carried this fear of unjust prosecution while shopping into my thirties. It was the only thing I had to counter the shop owners who pay more attention to me than any other customer, who keep an eye on every trinket I pause to examine or piece of clothing I hold up to my frame. But one thing that has changed since my youth is technology that can eliminate the implicitly biased middle man.
In January, megaretailer Amazon opened its first cashierless convenience store in Seattle called Amazon Go. You use the Amazon Go app (which is connected to your Amazon account) to scan yourself into the store, grab what you want (be it a bottle of wine or premade sandwich) and walk out without needing to check out at a register. That's because a combination of algorithms and computer vision-enabled cameras keep track of what you're grabbing off the shelves as you shop, and automatically charges your Amazon account for what you took out of the store. There are now six stores open to the public: three in Seattle, two in Chicago and one in San Francisco.
I was dubious at best when I first heard about Amazon Go, and not just about the technology. The idea of walking into a store, taking an item or several off the shelves and strolling right back out again boggled my mind. It ran counter to everything I had learned about being black and shopping. Technology is great and all, but could I really put aside my decades of baggage and become comfortable enough to just literally grab and go?
I hesitated to accept the idea of Amazon Go for me, because it would force me to trust a system I couldn't see. I would have to believe that I had the freedom to take things, even though it's completely legit, and leave without fear.
So I decided to give Amazon Go a try during a recent work trip to Seattle for the Smart Kitchen Summit. I visited the original store on the bottom floor of Amazon's Seattle headquarters. I knew a little bit of what to expect from my colleague Shara Tibken, who got a first look at the store in January. I downloaded the Amazon Go app and connected it to my Amazon account. With the app open and a QR code ready, I held my phone to the turnstile's scanner and let myself into the store.
Though Amazon Go's concept is all about not having cashiers, there were still plenty of Amazon employees in the store, easy to spot in their orange shirts. Their presence initially made me pause. Would they give me the stink eye as I walked through the store putting bottles of water and bags of chips into my bag?
I grabbed one of the orange Amazon Go bags and began to make my way around the perimeter of the store. I was studying the various bottled waters and debating whether to get fizzy or still, or a bottle of kombucha, when I realized what I was really doing: I was stalling. The fear I had carried with me for decades reared its head as I stood in front of the refrigerated display. I was afraid to make a choice, remove it from a shelf and put it in my bag. I was afraid someone would pop out from behind a display of Amazon-branded merch and scream, "Get your hands off that!" And I was mad that this fear couldn't even let me fully enjoy an experience that's designed for everyone to grab and go, no questions asked.
Eff this, I thought. I'm getting some Vitamin Water.
Once the plastic bottle hit the bottom of my reusable bag, I glanced around to see if anyone noticed. The Amazon employees shuffled around the small store and restocked shelves. Tourists chatted in small groups as they pointed and looked for the sensors that were keeping track of our every move. One guy with his phone on a selfie stick recorded himself as he selected snacks. And then there were the folks for whom the novelty had worn off and just wanted a vegetarian banh mi sandwich.
No one cared what I was doing. Is this what it feels like to shop when you're not black?
I went on to buy a weekend's worth of hotel room snacks -- a meat and cheese plate, some pretzels and almond butter, two cans of wine. It was the wine that prompted my only human interaction in Amazon Go: An employee who stood in front of the shelves of alcohol asked to see my ID before I could get my hands on my rosé. He warned me that my license was about to expire, then stepped aside so I could continue shopping. No hassle.
Amazon Go isn't going to fix implicit bias or remove the years of conditioning under which I've operated. But in the Amazon Go store, everyone is just a shopper, an opportunity for the retail giant to test technology, learn about our habits and make some money. Amazon sees green, and in its own capitalist way, this cashierless concept eased my burden a little bit. "
In Amazon Go, no one thinks I'm stealing - CNET:
Posted by John H Armwood II at 5:35 PM