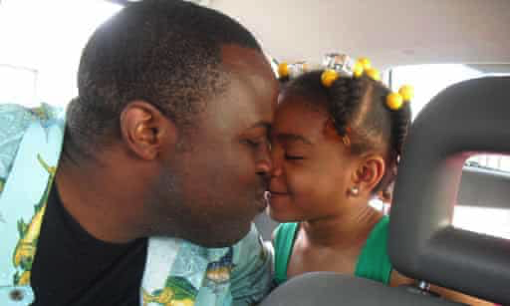 "Chinedu Okobi, who was unarmed and living with mental illness, died after being Tasered near San Francisco

Lois BeckettFirst published on Tue 16 Oct 2018 14.57 EDTThe first news of his death came as a traffic update. El Camino Real, a busy road south of San Francisco, had been closed for hours on 3 October as law enforcement investigated what local news called a “deadly encounter”.

A man was dead after being Tasered by sheriff’s deputies. He was described, in the early reports, only as a “36-year-old black man”, who the sheriff’s department said in a statement had been “running in and out of traffic” early that afternoon and had “assaulted” a sheriff’s deputy who approached him. An investigation was taking place.
Amaka Okobi, 72, saw the news and remembered thinking: “Oh God, I feel so bad for his mother.”
That evening, Amaka, who lives in Pacifica, south of San Francisco, received a visit from the San Mateo coroner’s office. The man on the news was her son.

Chinedu Valentine Okobi was a poet, a devoted father to his 12-year-old daughter, Christina, and a 2003 graduate of Morehouse, the historically black college in Atlanta.

His death has caused agony and a quest for answers as to exactly how and why Chinedu died – answers that, they feel, are not being provided by the police. It has also renewed debate over the deaths of unarmed black men at the hands of law enforcement, especially those with mental illness.

In 2015, more than one in five cases of Americans killed by the police reportedly involved mental health issues, according to The Counted, the Guardian’s investigation into every police killing in the United States in 2015 and 2016. Black males aged 15-34 were nine times more likely than other Americans to be killed by law enforcement officers in 2016, according to data collected for the project.

Chinedu had grown up in San Francisco as the youngest son of a Nigerian American family. He had spent the last decade managing serious mental illness, and in the past year, his older sister Ebele Okobi said, his family had grown worried as he seemed to grow more unstable, dropping in and out of contact with them.
Chinedu had been unarmed during his encounter with San Mateo county sheriff’s deputies, the San Mateo district attorney, Steve Wagstaffe, who was investigating his death, told reporters. The public statement from the sheriff’s department suggested deputies had intervened to protect Chinedu from getting injured by traffic, Ebele said.
So why is her brother dead?

Ebele, 44, is a Columbia-trained lawyer who currently works as Facebook’s public policy director for Africa. Her role has included accompanying the Facebook founder, Mark Zuckerberg, on African visits, including a meeting with Nigeria’s president. But her high-profile job and elite connections had not given her the power to keep her younger brother safe.
“That’s the crazy thing: privilege does not protect you in any way,” she said. “I’ve been struck by the responses from people I know: ‘I don’t believe this happened to you.’”

As a black American woman, Ebele said she had lived in fear for years that she would lose someone she loved to police violence.

After the birth of her twins, a son and daughter, she had decided to move her family to London. They moved in 2014. “I don’t have the mental or emotional fortitude to raise a son in America,” she said she had decided. “I don’t have it.”
Chinedu Okobi at his Morehouse graduation.Chinedu Okobi at his Morehouse graduation. Photograph: Courtesy Okobi familyWagstaffe, the district attorney investigating the incident, had told reporters that Chinedu was 6ft3in tall, and he weighed 330 pounds.

Chinedu had used to joke about his height with his oldest sister, calling her “Little Big Sis”, because she was only 5ft4in. Now, her brother’s height had become a piece of evidence.

In an interview on Monday, the day before a Tuesday morning memorial service for Chinedu in San Francisco, Ebele said that she and had her family had tried to piece together information about Chinedu’s last days, hours and minutes.
What they had found so far were only fragments, she said, and some of the details were conflicting.
“All we know is what we’re piecing together from news reports and from video that people are sending us,” Ebele said. Right now, the family does not even know when and where Chinedu died.

Local law enforcement officials have made no attempt to reach out and are not talking to them, Ebele said. The only contact her family has had with any officials is with the coroner’s office, on the day of her brother’s death, she said.
“Chasing him down and tasing him – there’s a protocol for dealing with people in crisis, and that’s not it,” Ebele said.
Basic facts of Chinedu’s death remain unclear, said John Burris, an Oakland-based civil rights attorney who is representing his family.

“The question is: what was he doing that caused the police to confront him in the first place? There’s no evidence that he was committing any type of crime,” said Burris, who has served as an attorney in multiple high-profile police abuse cases. “How many times was he tased? How many officers tased him?”

A witness video obtained by the family provides a “partial” documentation of Chinedu’s encounter with the sheriff’s deputies, Burris said. “You can see on it that the officers were beating Chinedu, tasing him. We can see that he’s on the ground … he’s shouting ‘What have I done?’ and he finally breaks loose and he starts to run and they catch him,” he said. But then the video breaks off, Burris said.

The video has not yet been released to the public and has not reviewed by the Guardian. Burris said his team was continuing to review the footage and wanted to make sure they understood its full context before releasing it.
Burris is calling on officials to release any videos of the incident.

While there are several witnesses to what happened, “no one saw beginning to end,” Burris said, and they have not identified any witnesses who saw how Chinedu’s encounter with the police began.

Guidotti said prosectors would interview the deputies involved, but she could not comment on whether those interviews had taken place.

The San Mateo county district attorney’s office has named five deputies involved in the incident, all of whom are reportedly on paid leave during the investigation.

“Staff members in critical incidents where a death occurs are routinely placed on paid administrative leave, pending investigation,” Detective Rosemary Blankswade, a spokesperson for the office, said in a statement. Once a district attorney’s investigation is complete, she said, the sheriff’s office “will often conduct a separate administrative investigation” looking at “compliance with our policies”.

“Additional and updated details surrounding the incident are not available at this time in light of the ongoing investigation,” she wrote.

Burris told the Guardian that the lack of information from law enforcement officials was “pretty typical” and that, as always, the lack of basic information about a loved one’s death only added to the family’s pain.
Ebele described her younger brother as someone who had been gregarious, personable, kind, and deeply devoted to his young daughter. He had been passionate about music and slam poetry, and was featured in a 2001 documentary about teenage slam poets, Poetic License, she said.

It was as he was preparing for life after college that Chinedu experienced the onset of serious mental illness, she said. He had been studying for graduate placement exams when he had what Ebele described as a psychotic break. The family brought Chinedu back to California, but struggled to get him a diagnosis and appropriate care.
For the past decade, since 2009, he had been on medication and had built himself “a regular life.” He worked a series of jobs, including at Home Depot, “he took care of his daughter, he paid child support, he went to church”. At different times, he had lived at a halfway house, on his own, with his brother, and with a girlfriend.

Ebele wrote in a tribute to her brother: “We were so proud of him for creating a good and kind life.”
Around December 2017, his family noticed a change in his behavior. Chinedu did not show up to the family’s Christmas, even to see her children visiting from London.

“He just wasn’t himself,” she said.

He wouldn’t return calls, she said. He would send a text, but then not respond back.

Family members thought he had either stopped taking his medication, Ebele said, or that his current medication was no longer working.

Even as he struggled, his daughter, who lived in Tennessee, had remained a priority. He went to see her in May, Ebele said. And one of the final things that he did, the last day before he was killed, was to pay child support.
Another last fragment: “He texted my mother and said, ‘Hello, sunshine,’” Ebele said.