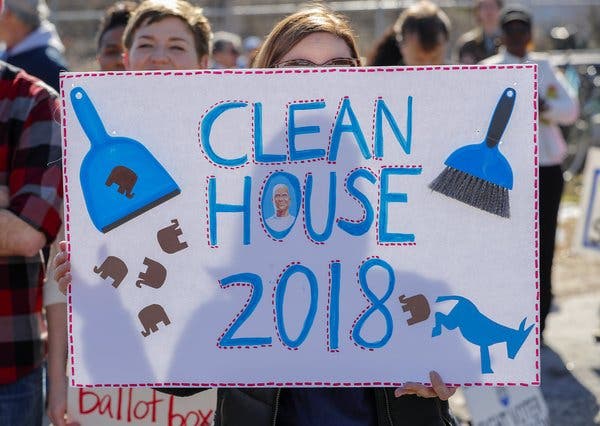 In the midterm elections, the resistance will finally have a chance to push back against Trump.

They told us that we suffered from Trump Derangement Syndrome, an emotional and illogical obsession with opposing and unseating Donald Trump.

They saw our principled stand against corruption and criminality, against immorality and hatred, as born of hyper-partisanship and the bruises of defeat.

They were unable to see that our objection to Trump was an achingly particular phenomenon that transcended party tribalism and went to the core of who we are as a people and a country.

For us, it was clear: This man was wholly unacceptable, as a matter of character. And true patriotism demanded that we say so, without equivocation, and unrelentingly.

Trump had become the president by a complex web of occurrences: white racial anxiety, reaction to the first black president, unease about the possibility of the first female president, voter suppression and voter apathy, and an attack on our elections by the Russians.

This presidency has been haunted by the specter of illegitimacy from its inception.

And yet, the markets didn’t crash. The economy kept humming. We entered no new major foreign conflicts, although we have cozied up to people who should be enemies and spat in the faces of people who used to be friends.

The Trump presidency was not the cataclysm that many had feared, but the possibility of damage hovers over us. What would he do if Robert Mueller’s Russia probe inched too close to him, his family or his fortune? What would happen if one of his children were indicted? (Donald Trump Jr., I’m looking at you.) What if Mueller produced a damning report? What if Congress used that report to begin impeachment proceedings?

We know that Trump is volatile, uncontrollable and unpredictable. So, we live a life with nerves frayed and bodies pushed to the edge of our seats. We know that he remains defiant because there are people who support him without hesitation and without question. They are the deranged, not us.

This constant state of chaos and anxiety has been exhausting and nearly unbearable, but it is all coming to a head in November when the defiant, the resisters, the never-Trumpers, will get to have their voices heard in a way that reaches beyond protests and rallies.

It will be the rest of America’s first chance at the polls to show just how unacceptable and repulsive we view Trump and his Republican enablers in Congress. It will be the first time for people to shift power away from him and his cronies and toward people willing to hold him accountable.

And it looks like people are champing at the bit for the chance. There has been extraordinarily high voter turnout in primary races across the country, including in New York, Michigan, Arizona, Vermont and Iowa.

“Minnesota, you crushed it last night! With 100% Reporting: 902,119 people voted in the primary; the highest number of primary voters since 1982. Overall turnout was approximately 22.7%; the highest turnout percentage in a primary since 1994. Amazing!”

Most of that energy is coming from people opposed to Trump and his corrupt administration, thereby benefiting Democrats.

Trump’s already low approval rating has taken a hit in recent weeks with Mueller’s investigation making steady progress: the guilty plea and now apparent cooperation of Michael Cohen, Trump’s longtime lawyer; the plea and cooperation of his former campaign chairman Paul Manafort; the explosive new book by Bob Woodward and the damning anonymous op-ed written by an administration official and published in The New York Times.

This is the worst possible scenario for the president and his party less than two months from Election Day.

As Gallup pointed out last week:

“The president’s party almost always suffers a net loss of U.S. House seats in midterm elections. However, losses tend to be much steeper when the president is unpopular. In Gallup’s polling history, presidents with job approval ratings below 50 percent have seen their party lose 37 House seats, on average, in midterm elections. That compares with an average loss of 14 seats when presidents had approval ratings above 50 percent.”

Trump’s approval rating is at 40 percent, and unlike his predecessors, he is not a normal president. He is a divisive lightning rod.

Democrats are not only likely to win control of the House of Representatives; they also have a long-shot chance of taking control of the Senate, although the map is working against them.

Resistance up to this point has largely been a statement of principle, but when we vote in November it will be an expression of power. We’re not deranged; we’re determined!

Opinion | Not Deranged. Determined! - The New York Times
Posted by John H Armwood II at 8:18 AM