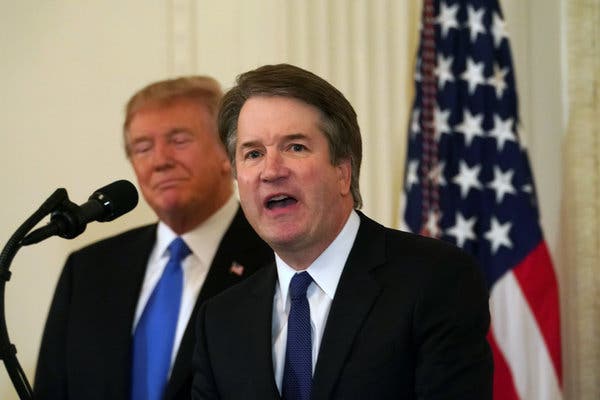 "Christine Blasey Ford’s claims that Judge Brett M. Kavanaugh sexually assaulted her when they were teenagers while he was drunk have drawn attention to a speech he gave four years ago in which he discussed heavy drinking at Yale Law School — and to an offhand remark about his high school days that he made during another speech.

Earlier this week, a transcript of a 2014 speech Judge Kavanaugh apparently gave at a banquet for the Yale Law School Federalist Society surfaced via a Washington Post reporter on Twitter; some of it was later transcribed and posted by the magazine Mother Jones.

The speech, in which he imparted lessons to students and reminisced about his time at school, contained one section in which Judge Kavanaugh, now 53, fondly recalled some debaucherous — if seemingly harmless — nights of heavy drinking and revelry as a Yale Law student.

In one episode, he described taking a bus with his classmates to Boston for a Red Sox game and a night of barhopping, which ended with the students “falling out of the bus onto the front steps of Yale Law School at about 4:45 a.m.”

“Fortunately for all of us, we had a motto: ‘What happens on the bus stays on the bus,’” the speech said.

Judge Kavanaugh then went on to describe a “good run” in his third year of law school, in which he and his classmates “got our work done, but we had our share of fun.” He discussed a class party and mentioned a nearby bar, which he summarized by saying: “We had a memorable evening. It is fair to say that we had a few drinks. Indeed, as a classmate of mine and I were reminiscing and piecing things together the other day, we think we had more than a few beers before the banquet. Might have been at Toad’s. Not a good idea.”

Then, on Tuesday, an apparently truncated video clip of Judge Kavanaugh giving another speech emerged. Referring to his high school in 2015, he again modified the frequently used cliché: “What happens at Georgetown Prep, stays at Georgetown Prep.”

He added: “That’s been a good thing for all of us, I think.”

Senator Elizabeth Warren, Democrat of Massachusetts, tweeted the video of Judge Kavanaugh making the quip and said: “I can’t imagine any parent accepting this view. Is this really what America wants in its next Supreme Court Justice?”

Dr. Blasey has accused Judge Kavanaugh of sexual assault, saying that during a high school party in the early 1980s, he pinned her on a bed, groped her and covered her mouth to keep her from screaming."