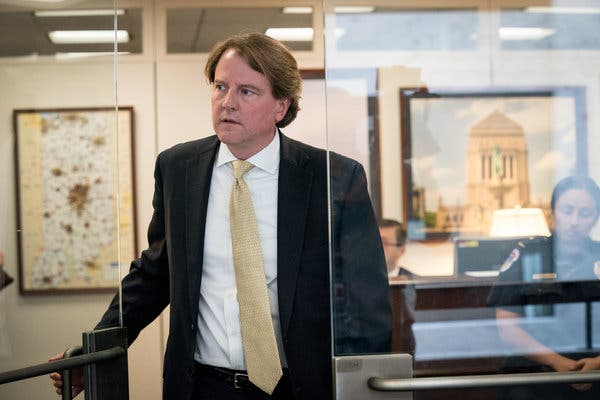 "WASHINGTON — The White House counsel, Donald F. McGahn II, has cooperated extensively in the special counsel investigation, sharing detailed accounts about the episodes at the heart of the inquiry into whether President Trump obstructed justice, including some that investigators would not have learned of otherwise, according to a dozen current and former White House officials and others briefed on the matter.

In at least three voluntary interviews with investigators that totaled 30 hours over the past nine months, Mr. McGahn described the president’s fury toward the Russia investigation and the ways in which he urged Mr. McGahn to respond to it. He provided the investigators examining whether Mr. Trump obstructed justice a clear view of the president’s most intimate moments with his lawyer.

Among them were Mr. Trump’s comments and actions during the firing of the F.B.I. director, James B. Comey, and Mr. Trump’s obsession with putting a loyalist in charge of the inquiry, including his repeated urging of Attorney General Jeff Sessions to claim oversight of it. Mr. McGahn was also centrally involved in Mr. Trump’s attempts to fire the special counsel, Robert S. Mueller III, which investigators might not have discovered without him.

For a lawyer to share so much with investigators scrutinizing his client is unusual. Lawyers are rarely so open with investigators, not only because they are advocating on behalf of their clients but also because their conversations with clients are potentially shielded by attorney-client privilege, and in the case of presidents, executive privilege..."