Opinion | The DeVos School for the Promotion of Student Debt. The education secretary is working hard to protect the scandal-ridden for-profit education industry from accountability. - The New York Times 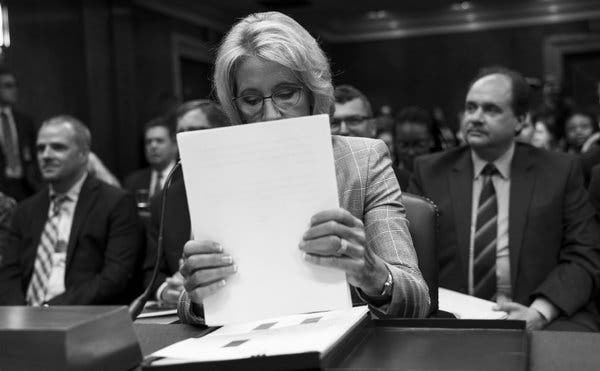 "The education secretary is working hard to protect the scandal-ridden for-profit education industry from accountability.

Say this for Betsy DeVos: The secretary of education has shown an impressive commitment to rescuing her friends in the for-profit college business from pesky measures to rein in their predatory behavior. As pet projects go, it lacks the sulfurous originality of her emerging idea to let states use federal dollars to put guns in schools. But it is a scandal nonetheless. Given the choice between protecting low-income students — and, by extension, American taxpayers — and facilitating the buck-raking of a scandal-ridden industry, Ms. DeVos aggressively pursues Option B.

This summer has been a fertile period for the secretary. A couple of weeks back, her department formally introduced its plan to jettison so-called gainful employment rules. These 2014 regulations require that, to receive federal student-aid dollars, for-profit colleges — along with certain programs at nonprofit and public institutions — must maintain a reasonable debt-to-income ratio among graduates. If a program’s attendees typically rack up massive student debts and then cannot find decent jobs, the program is deemed a failure. Programs that fail in two out of three years become ineligible to receive the taxpayer-backed loans and grants with which so many students finance their schooling. The rules also require for-profit programs to make clear in their promotional materials whether or not they meet federal job-placement standards.

Ms. DeVos, delighting industry executives, promptly hit the pause button on these regulations upon assuming her post. Now the pending demise of the rules has been made official. Ms. DeVos contends that the system, put in place by President Barack Obama after bloody battles with the for-profit college industry and congressional Republicans, capriciously targets the sector. She has had far less to say about the industry’s eye-popping overrepresentation in fraud complaints. A recent review of “borrower defense claims” — requests for loan relief filed with the Education Department by students asserting they were defrauded or misled by their schools — found that almost 99 percent involved for-profit institutions.

In recent years, for-profit colleges have been swamped by lawsuits charging that they use deceptive marketing practices and high-pressure recruitment tactics to snooker students into taking on crippling debt in the pursuit of worthless degrees. Two industry giants, ITT Technical Institute and Corinthian Colleges, have collapsed under the weight of the legal claims and government probes.

Dozens of additional programs have shut their doors of late rather than attempt to meet the new accountability standards. Consumer advocates see this as evidence that the common-sense regulations are working. Industry executives, and Ms. DeVos, see it as proof that the Obama administration had it in for the sector.

Gainful employment rules are but a piece of the accountability puzzle that Ms. DeVos is looking to end. In late July, the department announced it was tightening rules governing the forgiveness of student loans, increasing the burden of proof on individuals to show that they’ve been misled intentionally by their schools or that they’ve suffered grave financial hardship.

The secretary insists that she wants to root out bad actors as much as anyone. But if that were true, she probably wouldn’t have dismantled the department’s team tasked with investigating fraud at for-profit schools. She also might have opted not to end her department’s information-sharing arrangement with the Consumer Financial Protection Bureau, which is among the agencies that regulates this industry. (Until the Trump era, it was one of the most aggressive to do so.)

This problem affects not just students taken in by the schools’ false claims, but also taxpayers who foot the bill for defaulted student loans. By the Education Department’s own figures, repealing the Obama-era rules will cost taxpayers $5.3 billion over the next decade.

Ms. DeVos is a fan of using government money to fund private schools while demanding little accountability. It is no coincidence that she packed her department with aides with ties to for-profit colleges. One ex-industry executive, Robert Eitel, is a senior adviser who was involved in suspending the loan-forgiveness rules that are now being rewritten. Another hire, Julian Schmoke, is a former dean for the DeVry Education Group. Under President Obama, DeVry was being investigated by the department’s special fraud unit. The probe was abandoned shortly after President Trump took office in 2017, and, that summer, Ms. DeVos put Mr. Schmoke in charge of the unit. (Mr. Schmoke will, the department has assured the public, recuse himself from issues involving DeVry.)

Under Ms. DeVos, the department also has halted investigations into Bridgepoint Education and the Career Education Corporation. Former executives and counselors for those companies now hold senior positions at the department.

All of them, of course, work for Mr. Trump, whose eponymous “university” eventually paid $25 million to settle fraud claims of its own.

This is what happens when an administration stocks its agencies with people whose allegiances are to the industries they are meant to oversee. Mr. Trump’s Environmental Protection Agency, for instance, has begun to resemble less a regulatory body than a convention of fossil-fuel fan boys. Former administrator Scott Pruitt was an unabashed cheerleader for oil and gas. His replacement, Andrew Wheeler, is a former coal lobbyist. On Monday, he proposed a rollback of the Obama administration’s Clean Power Plan, which aimed to curb the release of greenhouse gases from power plants.

Ms. DeVos’s plan to ax the gainful employment rules was entered into the Federal Register on Aug. 14, officially starting the 30-day period open to public comment on the proposed changes.

Barring an unforeseen twist, executives in the for-profit education industry will soon be sleeping better, secure in the knowledge that even the worst are no longer at risk of being thrown off their taxpayer-backed gravy train, no matter how epically they fail their students."

Opinion | The DeVos School for the Promotion of Student Debt - The New York Times
Posted by John H Armwood II at 8:57 AM