Opinion | Brian Kemp, Enemy of Democracy - The New York Times - This is the racist Republican candidate for Governor. #ResistanceIsNotFutile 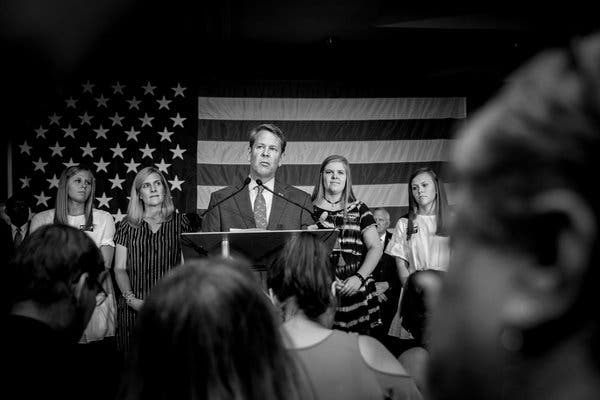 "The Republican runoff for the governorship in Georgia last month seemed like a cage match to see who could best mimic President Trump. The primary combatants, Secretary of State Brian Kemp and Lt. Gov. Casey Cagle, ran on a platform of a hatred of “illegal” immigrants and a love of guns. It was a race to see who “could be the craziest,” as Mr. Cagle admitted. He thought he would win.

But he lost in a landslide. Shortly before the election, the president endorsed Mr. Kemp, and the political tide turned. He has a skill set that Mr. Trump desperately needed but was curiously silent about in his endorsement: He is a master of voter suppression.

Hackable polling machines, voter roll purges, refusing to register voters until after an election, the use of investigations to intimidate groups registering minorities to vote — Mr. Kemp knows it all.

A supporter at Brian Kemp’s primary election night event in the Georgia governor’s race.CreditMelissa Golden for The New York Times

The Georgia state flag used from 1956 to 2001 on display at a polling station in Chickamauga last May.CreditDoug Strickland/Chattanooga Times Free Press, via Associated Press

That political power, however, bears no relation to the state’s demographics. Whites make up less than 60 percent of the state’s population but more than 90 percent of people who voted Republican in the primary. The state’s gerrymandered districts, drawn and redrawn by the Republican-dominated Legislature, mirror the inordinate and disproportionate power of this constituency.

But a change is coming. Black voter turnout, despite the barriers, is increasing — energized by a growing antipathy toward President Trump and his vision for and of African-Americans. Moreover, as the Pew Hispanic Trust reported, the ranks of the Republican Party are declining. In 2016, whites made up 57 percent of all registered voters in Georgia, down from 68 percent in 2004.

That’s why Mr. Kemp has worked diligently to fortify the Republicans’ crumbling bulwark since he became secretary of state in 2010. He has begun investigations into organizations that registered nearly 200,000 new Asian-American and African-American voters — efforts that resulted in the first majority-black school board in a small town.

His investigations yielded no charges, no indictments, no convictions, despite years of probing, suspects’ losing their jobs and Georgia Bureau of Investigation agents knocking on doors. Yet the intimidation had an impact. An attorney from a targeted organization told a reporter: “I’m not going to lie; I was shocked. I was scared.”

While Mr. Kemp insisted that these investigations were about preventing in-person voter fraud (which basically doesn’t exist), he was more candid when talking with fellow Republicans: “Democrats are working hard,” he warned in a recording released by a progressive group “registering all these minority voters that are out there and others that are sitting on the sidelines.”

“If they can do that, they can win these elections in November,” Mr. Kemp said. Therefore, even after the multiple investigations yielded no indication of fraud, thousands of people registered during these drives were not on the voter registration rolls, and a court ruling kept it that way.

Mr. Kemp also used Exact Match, a version of the infamous Crosscheck database, to put tens of thousands of citizens in electoral limbo, refusing to place them on the rolls if an errant hyphen, a stray letter or a typographical error on someone’s voter registration card didn’t match the records of the state’s driver’s license bureau or the Social Security office.

Using this method, Mr. Kemp blocked nearly 35,000 people from the voter rolls. Equally important, African-Americans, who made up a third of the registrants, accounted for almost 66 percent of the rejected applicants. And Asian-Americans and Latino voters were more than six times as likely as whites to have been stymied from registering.

But as diligent as he has been about purging eligible citizens from the voter rolls, Mr. Kemp has been just as lax about the cybersecurity of the state’s 27,000 electronic voting machines. Although there were a series of warnings about the ease with which they could be hacked, Mr. Kemp did not respond. Georgia’s electronic voting machines, which run on Windows 2000, leave no paper trail; as a result, there is no way to verify whether the counts are accurate or whether the vote has been hacked.

But the Department of Homeland Security warned him that hacking was a possibility. He ignored that until 2016, when, at a DefCon hacker convention in Las Vegas, an organization took control over the way Georgia’s voting machines register and store votes, although it had little expertise in voting matters. Mr. Kemp finally accepted federal dollars, which he had refused for years, to update some of the machines. But his efforts were too little, too late.

That complacency was evident when groups sued the state, alleging that the 2016 presidential election and a 2017 special election had been hacked. Rather than being on high alert to get to the bottom of it, after Mr. Kemp received notification of the lawsuit, officials at Kennesaw State University, which provides logistical support for the state’s election machinery, “destroyed the server that housed statewide election data.” That series of events, including an April visit to the small campus by Ambassador Sergey Kislyak of Russia, raised warning flags to many observers. But not to Mr. Kemp, who said that there was nothing untoward in any of it; the erasure was “in accordance with standard IT procedures.”

Mr. Trump’s endorsement, therefore, was no surprise. Mr. Kemp had pulled off an incredible feat: Georgia’s population increased, but since 2012, the number of registered voters has decreased. He, like Mr. Trump, has been steadfast in riding the voter-fraud train, regardless of how often and thoroughly the claim has been debunked. His work has winnowed out minorities who overwhelmingly vote Democratic and so threaten the Republican stranglehold on Georgia.

A Kemp victory in November is, therefore, transactional but essential for Mr. Trump. It means that there will be a governor, in a state that demographically should be blue, who is practiced and steeped in the nuances of disfranchisement. Mr. Kemp can rubber-stamp the Legislature’s voter-suppression bills that privilege the Republican Party, artificially increase the Republican representation in Congress and in the end protect a president facing mounting evidence of graft, corruption, conspiracy and the threat of impeachment.

Carol Anderson is a professor of African-American studies at Emory University. She is the author of “White Rage: The Unspoken Truth of Our Racial Divide” and the forthcoming “One Person, No Vote: How Voter Suppression Is Destroying Our Democracy.”