National Enquirer Had Decades of Trump Dirt. He Wanted to Buy It All. - The New York Times 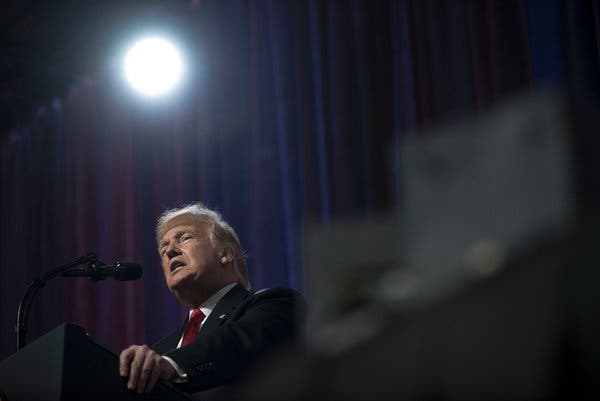 "Federal investigators have provided ample evidence that President Trump was involved in deals to pay two women to keep them from speaking publicly before the 2016 election about affairs that they said they had with him.

But it turns out that Mr. Trump wanted to go even further.

He and his lawyer at the time, Michael D. Cohen, devised a plan to buy up all the dirt on Mr. Trump that the National Enquirer and its parent company had collected on him, dating back to the 1980s, according to several of Mr. Trump’s associates.

The existence of the plan, which was never finalized, has not been reported before. But it was strongly hinted at in a recording that Mr. Cohen’s lawyer released last month of a conversation about payoffs that Mr. Cohen had with Mr. Trump.

The move by Mr. Trump and Mr. Cohen indicated just how concerned they were about all the information amassed by the company, American Media, and its chairman, David Pecker, a loyal Trump ally of two decades who has cooperated with investigators.

It is not clear yet whether the proposed plan to purchase all the information from American Media has attracted the interest of federal prosecutors in New York, who last week obtained a guilty plea from Mr. Cohen over a $130,000 payment to the adult film actress Stephanie Clifford, also known as Stormy Daniels, and a $150,000 payment to a Playboy model, Karen McDougal.

But the prosecutors have provided at least partial immunity to Mr. Pecker, who is a key witness in their inquiry into payments made on behalf of Mr. Trump during the 2016 campaign.

The people who knew about the discussions would speak about them only on condition of anonymity, given that they are now the potential subject of a federal investigation that did not end with Mr. Cohen’s plea.

Lawyers for Mr. Trump and Mr. Cohen declined to comment for this article as did American Media.

It is not known how much of the material on Mr. Trump is still in American Media’s possession or whether American Media destroyed any of it after the campaign. Prosecutors have not said whether they have obtained any of the material beyond that which pertains to Ms. McDougal and Ms. Clifford and the discussions about their arrangements.

For the better part of two decades, Mr. Pecker had ordered his staff at American Media to protect Mr. Trump from troublesome stories, in some cases by buying up stories about him and filing it away.

What Happens to #MeToo When a Feminist Is the Accused?

This Is the Way Paul Ryan’s Speakership Ends

In 2016, he kept his staff from going back through the old Trump tip and story files that dated to before Mr. Pecker became company chairman in 1999, several former staff members said in interviews with The New York Times.

That meant that American Media, the nation’s largest gossip publisher, did not play a role during the election year in vetting a presidential candidacy — Mr. Trump’s — made for the tabloids.

Mr. Pecker also worked with Mr. Trump and Mr. Cohen to buy and bury Ms. McDougal’s story of an affair with Mr. Trump, a practice known as “catch and kill.” Mr. Cohen admitted as much in making his guilty last week.

In August 2016, American Media acquired the rights to Ms. McDougal’s story in return for $150,000 and commitments to use its magazines to promote her career as a fitness specialist. But American Media never published her allegations about a relationship with Mr. Trump.

Shortly after American Media completed the arrangement with Ms. McDougal at Mr. Trump’s behest, a troubling question began to nag at Mr. Trump and Mr. Cohen, according to several people who knew about the discussions at the time: What would happen to America Media’s sensitive Trump files if Mr. Pecker were to leave the company?

Mr. Cohen, those people said, was hearing rumors that Mr. Pecker might leave American Media for Time magazine — a title Mr. Pecker is known to have dreams of running.

There was perennial talk about American Media’s business troubles. And Mr. Trump appeared to take a world-wearier view of the wisdom of leaving his sensitive personal secrets in someone else’s hands:

“Maybe he gets hit by a truck,” Mr. Trump said of Mr. Pecker in a conversation with Mr. Cohen, musing about an unfortunate mishap befalling his good friend."

National Enquirer Had Decades of Trump Dirt. He Wanted to Buy It All. - The New York Times
Posted by John H Armwood II at 7:31 AM