'Discourse is not discord': Democrats mostly united at Netroots Nation event | US news | The Guardian 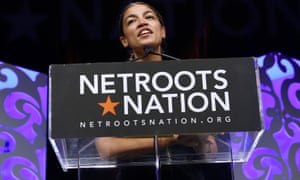 Bingo!  "Despite the broad policy consensus, questions of race and gender still remained for attendees to grapple with.

“I’ve got nothing against old, white men,” Mike Lux, a veteran progressive activist, told the crowd Saturday. “Some of my best friends are old, white men. But we’ve got way too many of them in the House and the Senate.”

Organizers boasted that two-thirds of the speakers were people of color, 63% were women and a quarter identified as LGBT. Those speaking in the main hall almost seemed contractually obliged to mention Stacey Abrams, the Democratic candidate in Georgia who would be the first black female governor in America if elected.

The shift could be seen around the event where a stray Bernie Sanders bumper sticker might be found stuck to the back of a Macbook but attendees were far more likely to wear a T-shirt bearing the image of Alexandria Ocasio-Cortez as “Alexandria the Great” and issues of racial and economic justice were viewed as fundamentally interwound.

“I have a problem with that phrase, ‘identity politics,’” said Senator Kamala Harris of California on Friday. “Let’s be clear – when people say that, it’s a pejorative. That phrase is used to divide and used to distract. Its purpose is to minimize and marginalize issues that impact all of us. It’s used to try and shut us up.”

'Discourse is not discord': Democrats mostly united at Netroots Nation event | US news | The Guardian
Posted by John H Armwood II at 12:38 PM