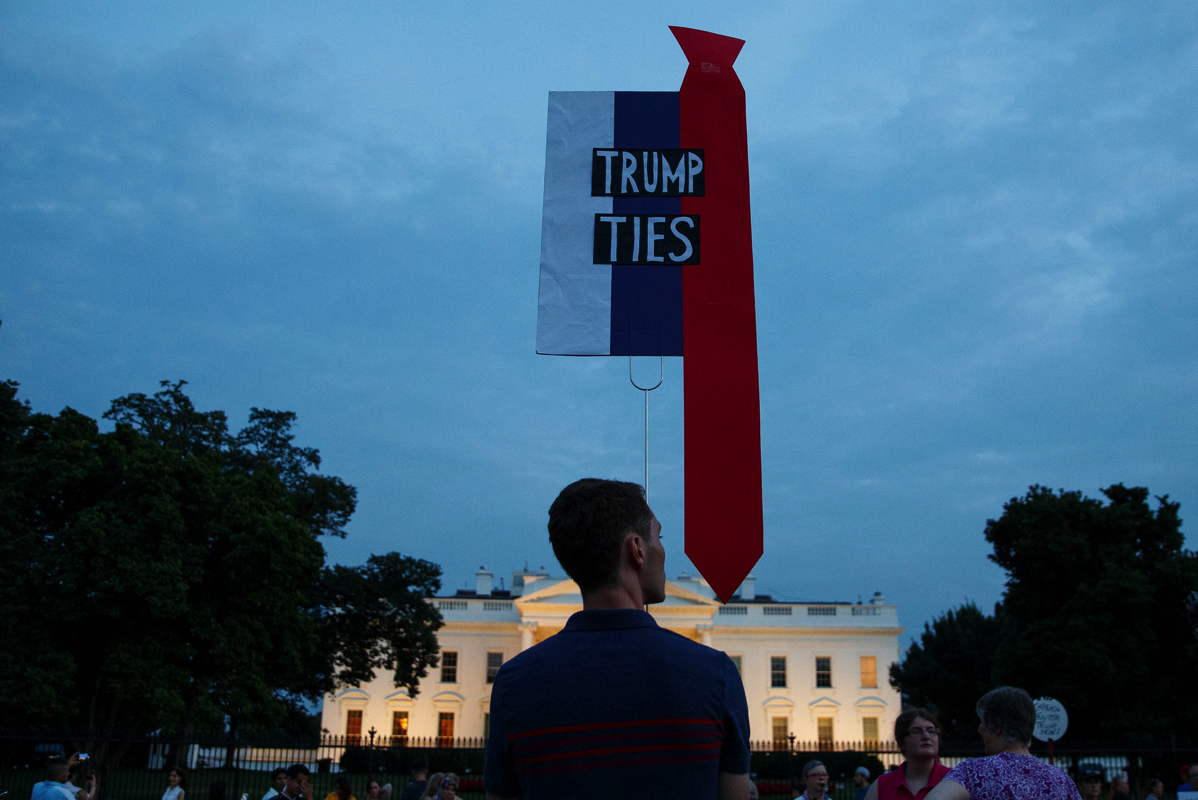 A conservative's take on Trump's unpresidential behavior. It is always necessary to look at things from one's opponent's viewpoint.

My official pundit’s opinion on Donald Trump, Russian election interference, collusion, kompromat and impeachment is that I’m waiting for the Mueller investigation to finish before I have a strong opinion. This allows me to cultivate the agnostic’s smug superiority, but it also leaves me without a suitably en fuego take after something like the immediately infamous Trump-Putin news conference — not because the president’s behavior wasn’t predictably disgraceful, but because the nature and scale of the disgrace can’t be assessed without a certainty about Trump’s motives that’s somewhat out of reach.So maybe this is a good time to step back and sketch out the three main ways to understand Trump’s relationship to Russia and Putin and the 2016 hacking of his Democratic rivals, the three major theories that make sense of our president’s strange conduct before and since. I’m not going to formally choose among them, but for people interested in betting I will offer odds for each.

In this theory of the case, you can explain all of Trump’s Russia-related behavior simply by finding him guilty of being the person we always knew him to be — vain, mendacious, self-serving, sleazy and absurdly stubborn, with a purely personalized understanding of allies and adversaries, a not-so-sneaking admiration for strongmen and the information filter of an old man who prefers his own reality to the discomforts of contrary information.
Thus Trump is friendly to Putin for the same reason that he praised the Chinese Politburo after Tiananmen Square and now praises Xi Jinping; the same reason that he likes the Saudi royals and buddies up to Recep Tayyip Erdogan; the same reason that after a brief period of bellicosity he’s ended up as a tacit apologist for Kim Jong-un. We have ample evidence, going back decades, that Trump simply likes authoritarian rulers, that he admires their supposed toughness and doesn’t give a fig about their cruelty, that he thinks they would make more reliable allies and partners for the United States than the ingrate democracies of Western Europe. And as Ben Domenech of The Federalist noted after the Helsinki performance, we also have ample evidence that he likes people who seem to like him and considers anyone who criticizes him an enemy: “Thus, the Euros are bastards, and Xi and Kim and Putin are not bad guys.”

If Trump seems to have a more intense affinity for Putin than for other autocrats, two further explanations may suffice. First, his history of doing business deals with Russians makes him particularly inclined to seek geopolitical deals with Russia — an inclination that’s essentially a shadier version of the affinity that the Bush family and other Arabists had with the Saudis and the Gulf States, cross-pollinated with the sleazy campaign-finance relationships that the Chinese cultivated with the Clinton White House.

At the same time, his vanity and amour propre, joined to his rage against his doubters, makes it impossible for Trump to admit that anyone else helped him win the White House — so he cannot bring himself to fully acknowledge and criticize Russian election meddling because to do so might call into question not only his legitimacy but his self-conception as a political grandmaster.

And what about the election-season contacts with suspicious Russian nationals and WikiLeaks, the Don Jr. meeting and the Roger Stone forays? In this theory they’re indicators that Trump, a shady guy surrounded by shady guys and professional morons, might well have colluded given the opportunity — but they don’t prove that any such opportunity presented itself. After all, neither the hacking nor the leaking of emails required his campaign’s cooperation, so there was no reason for the Russian side to advance beyond a deniable low-level meeting and WikiLeaks D.M.s, and thus no real opportunity for the Trump team to be a true accessory to the underlying crime.

This narrative does not exonerate Trump; indeed, it provides various grounds to condemn him. But those grounds are the same grounds that were obvious during the campaign: We watched him blow kisses to dictators then, complain about our allies then, promise a détente with Russia while exploiting the D.N.C. hacking then, double and triple down on falsehoods and bogus narratives then, cling to self-destructive feuds (the Khans, Alicia Machado) in the same way that he clings to public flattery for Putin … and after all this, he was still elected president. So be appalled when he behaves appallingly, but do not be surprised, do not confuse Trump being Trump with Trump being treasonous — and recognize that he isn’t leaving office until you beat him at the polls.

Overall it’s a theory that fits Trump’s personality extremely well, fits the available facts reasonably well, and doesn’t require any new revelations or heretofore-hidden conspiracies. So I continue to give it a … (consults extremely scientific methodology) … 65 percent chance of being the truth.

But in outlining the previous scenario I’ve conceded that people around Trump, including his own family members, did show a willingness to collude with dubious figures — and this concession alone means I can’t go along with Trump apologists and anti-anti-Trumpers who insist that collusion theories don’t have any evidence behind them. At the very least, they have the evidence of Don Jr.’s obvious enthusiasm and Stone’s conspicuous maneuvering. And then there is the reasonable point that if he were anyone else, much of Trump’s own behavior — the firing of James Comey, the rage against the investigations, the frequent lies and denials of the obvious, the unnecessary self-destruction — would look a lot like the behavior of a guilty man.

Because Trump is Trump, I think it’s more reasonable to see this behavior as of a piece with all his other irrational-seeming, self-destructive behavior on questions unrelated to l’affaire Russe. But there’s always the possibility that this characterological analysis is a form of overthinking, and that when the truth comes out we’ll look back and say that his guilt should have been obvious all along.

And what kind of guilt would it be? There are various possibilities, but the latest Mueller filing supplies one possible answer: In addition to the email leaks, we now know that the Russian hackers also accessed Democratic campaign analytics, a prize that (far more than the emails) would have been hard to fully weaponize if they weren’t shared directly with the Trump campaign.

Is there evidence of this weaponization? Not necessarily: A Twitter theory that the Trump team’s late spending shifts were suspiciously targeted and timed runs into the difficulty that 1) anyone could see by the fall that his electoral path ran through the Midwest and 2) the Democrats didn’t see his Wisconsin-Pennsylvania upsets coming, so why would their stolen analytics have helped Trump’s people target their way to victory?

But the Russians presumably hoped to do something with those analytics, people in Trump’s circle did show a willingness to communicate with them … and we know not only from Richard Nixon but also from Lyndon Johnson that the temptation to spy on your opponent’s campaign can be irresistible to politicians more experienced than Donald Trump.
So a Watergate-style endgame with a Russian twist is hardly a paranoiac’s fantasy: If the Trump campaign got stolen campaign data and Trump knew enough about it to inform his firing of Comey, that’s collusion and a case for impeachment wrapped into one scenario. And the odds that something like this is the truth I boldly place at … (calculates) … 25 percent.

That leaves 10 percent for the most dramatic theory, which is that any collusion wasn’t just something Trump’s team stumbled into during the campaign but something connected to a much longer-running Russian intelligence operation, and that Trump’s relationship to the Russian state is not just a personal or ideological affinity or a campaign-season alliance but a partnership forged through blackmail or bribery or both.

Most of that 10 percent covers the narrow version of this theory, in which Putin and Co. are blackmailing Trump with damaging financial information from his recent Russian dealings or with the mythical-or-is-it pee tape. A much smaller fraction of the fraction is left for the more baroque theory, elaborated (with caveats, but also way too much credulity) by Jonathan Chait in New York magazine recently, that Trump was actually compromised-cum-recruited by Russian intelligence all the way back in 1987, and that his whole worldview was somehow made in Moscow to help unmake the West.

There is a great deal of enthusiasm for this kind of theory, on social media especially, and on many days I think it’s embarrassing or risible — a birtherism of the center-left, an exculpatory fantasy from an establishment thrashing about to evade its own responsibility for the rise of populism, a “brown scare” about an omnicompetent Putin and a fascist international that mirrors similar paranoias on the right.

The first two narratives I’ve offered seem far more parsimonious, Trump seems like too brazen a sinner to be effectively blackmailed, and his worldview seems very palpably his own. Meanwhile, the Trump administration’s actual Russia policy, with its combination of the public bromance with Putin and more hawkish policies behind the scenes, would be a pretty a strange way for a Kremlin stooge to play his part.

But one of the vows I took after Trump's stunning political ascent was to refuse to be that surprised again, to refuse to simply laugh at scenarios that seem outlandish or unlikely — because, as they say, that kind of reflexive laughter is how you got Trump. And much as I’m inclined to put the Muscovite Candidate scenario at 1 percent or 0.1 percent, as I worked on this column the number kept creeping upward. After all, there’s got to be something in those tax returns … of course the Russians spy on foreign celebrities when they visit … the way he talks about Putin is, well, weirder than the way he talks about other foreign leaders …

Don’t fit me for that #Resistance shirt just yet; my money is still on the strange-but-not-that-crazy explanations for our president’s behavior. But in the age of Donald Trump, everyone should hedge their bets.