Let's drop the euphemisms: Donald Trump is a racist president | Opinion | The Guardian 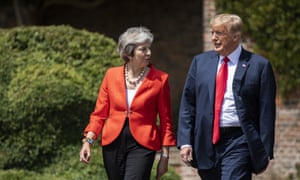 "Watching this pinball president ricochet around Europe, you could be forgiven for thinking there’s no method to Donald Trump’s madness.

Nato is both a rip-off and very strong. Theresa May’s Brexit plan is both pathetic and terrific. Trump’s interview with the Sun was both fake news and generally fine. Trump has all the consistency of Katy Perry’s Hot N Cold, except when it comes to two things: immigrants and Vladimir Putin.

Immigration is where Trump’s journey begins and ends: the message running all the way through this stick of rock. Trump told the Sun that immigration in Europe was “a shame”. Why such concern? “I think it changed the fabric of Europe and, unless you act very quickly, it’s never going to be what it was and I don’t mean that in a positive way.”

Don’t worry, Mr President. We didn’t think you meant it in a positive way. There was a time when politicians like you preferred to use a dog whistle, but those days seem quaint now. There’s something to be said for using a foghorn to blast your racism across the continents. At least we all know what kind of politics you represent.

But just in case anyone had any doubts, Trump took his explicit nativism several steps into more sinister territory on Friday while standing next to the British prime minister. When asked about his “fabric of Europe” comments, Trump began by talking about terrorism, before explaining his thinking.

They better watch themselves because you are changing the culture. There’s a polite way to say this, but the time for good manners has long gone. The president of the United States just threatened the safety and security of immigrants the world over.

Not just in Europe, he made clear, as he continued to talk about American immigration. “We have very bad immigration laws and we’re, I mean, we’re doing incredibly well considering the fact that we virtually don’t have immigration laws,” he explained.

So now we know. The reason Trump ordered the separation of thousands of immigrant children from their parents – some never to be reunited again – was because they better watch themselves. They are changing the culture and it better stop or else they’ll get hurt.

Trump has mused before about how good it would be to deport people without judges messing things up. He doesn’t consider his own country’s ample immigration laws to be actual laws that he respects. It’s one short step for a president – but one long step for democracy – to go from disrespecting the laws to ignoring them.

This is the language and mentality of so many extreme-right and neo-Nazi parties in Europe. So in the Trump spirit of saying it loud, it’s time to drop the euphemisms: Trump is today’s first major government to be led by the racist far right. It’s not some kind of new populist politics; it’s the old National Front.

It’s more than “not normal” – the media’s favorite phrase for expressing disapproval with the way Trump is blowing up the old norms. Trump personifies the kind of extremist policies that were the wet dreams of the John Birch Society and George Wallace.

This shouldn’t be a surprise. This is a president who started with racist conspiracies about the birthplace of America’s first black president, before launching his campaign with a racist rant about Mexican rapists. Once elected, after losing the popular vote, he rushed out his Muslim travel ban and has since unleashed his long-promised deportation force on anyone looking faintly Latino.

At this point, there are many previously respectable leaders – at home and overseas – as well as administration officials and journalists who have fooled themselves into thinking they are some kind of moderating influence. They have failed. They are a cheap veneer of respectability on an explicitly and punitively racist president.

The moral choices that Trump poses to anyone with a conscience or love of country are only made more clear by the ludicrous irony of his own story.

The grandson of a German immigrant, Trump has married not one but two immigrants. He knows full well how hard it is to be an immigrant: his family was so ashamed of its German roots through two world wars that Trump continued to pretend he had Swedish roots at the time he put his name to The Art of the Deal.

As any TV psychologist might observe, it was a continental-sized giveaway when Trump lied about his immigrant roots to the press after trashing Nato on Thursday. “I have great respect for Germany,” he said, after attacking the German government for months. “My father is from Germany.”

Fred Trump, father to Donald, was born in the Bronx.

If you make a herculean effort, you can just about understand what Trump means when he complains that the culture is changing. It’s true: the world is becoming more integrated and diverse right before his eyes.

That diversity is not just a source of talent for America and Europe, but has long been the core test of our decency: the standard by which we judge ourselves. America’s founding freedoms were in part to protect religious minorities persecuted elsewhere: the kind of people we’d call asylum seekers today.

Even the Brexit-leading prime minister, after an anti-immigrant Brexit campaign, has to admit the obvious. Another foreign leader might recognize those words as a rebuke. But not this president.

Trump is the kind of person who digs around the darkest corners of the extreme-right internet to come up with some England First nonsense. “You don’t hear the word England as much as you should,” he told the Sun, spouting the kind of drivel that gives skinheads a bad name. “I miss the name England,” he said.

If he read one of his many unexamined briefing papers, he might know that one of the likely conservative successors to Theresa May is the immigrant-sounding Sajid Javid, born Muslim in the north of England. His family shares a Pakistani heritage with the immigrant-sounding Sadiq Khan, the left-leaning London mayor Trump thinks is a terrorist sympathizer.

Perhaps next time Trump visits London, he’ll have to remember whether the bad guy is called Sajid or Sadiq. That’s the problem when the culture changes. You better watch yourself, Donald."

Let's drop the euphemisms: Donald Trump is a racist president | Opinion | The Guardian
Posted by John H Armwood II at 6:34 AM