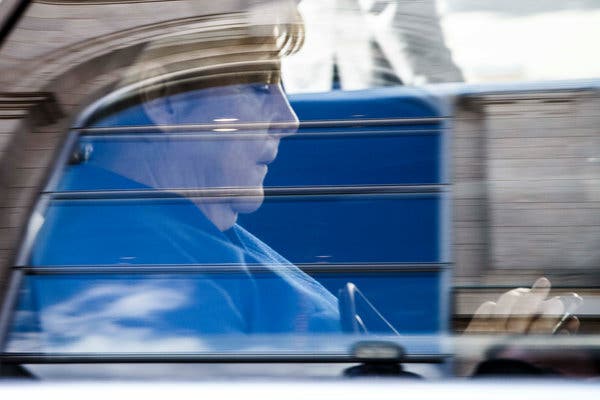 "The near political breakdown in Germany marks the beginning of the end for the European experiment, for an era of openness toward refugees and migrants in the West, and for Angela Merkel, the German chancellor at the center of the European political establishment.

Or, perhaps, it is a close call in which Ms. Merkel made difficult sacrifices to hold it all together, as she has done many times before.

Or maybe something in between.

The stakes of what is happening in Germany are difficult to overstate, but it can be easy to lose track of how this came to pass and how to think about what could come next. What follows is a simple guide.

Why are German politics melting down?

It started with a political uprising by Ms. Merkel’s interior minister, Horst Seehofer, over immigration.

He and Ms. Merkel split over “secondary” migrants: those who enter the European Union in a country such as Italy or Greece, and who then travel across the union’s open borders into Germany.

Ms. Merkel at a meeting with her interior minister, Horst Seehofer, in Berlin on Tuesday. The two split over “secondary” migrants: those who enter the European Union in a country such as Italy or Greece, and who then travel across the union’s open borders into Germany.

Their parties have split on the migration issue for a few reasons. Ms. Merkel has staked her legacy on upholding the European Union. A core tenet of the bloc is to maintain open borders among member states. She has also emphasized German leadership on accepting migrants and refugees.

But Mr. Seehofer’s party, like Bavaria, leans conservative. Its location, on the border with Austria, means it receives a disproportionate number of secondary migrants. Though new arrivals to Germany and Europe have dropped off almost entirely, a backlash against immigration has brought support to nativist groups. Mr. Seehofer’s party is worried about losing ground to the far right, especially ahead of state elections in October.

So Mr. Seehofer demanded that Ms. Merkel close Germany’s border to secondary migrants. If she refused, he said, he might do so himself. Or he might resign, potentially collapsing Germany’s governing coalition and maybe even ending Ms. Merkel’s 13-year reign.

Has the German migrant fight been resolved?

Maybe, but probably not.

Late Monday, Ms. Merkel announced a compromise deal. Germany would set up camps along the Austrian border to house secondary migrants while their status was reviewed. Any arrival found to have registered for temporary status in a different European Union country (think Italy, Greece, Spain) would be deported to that country.

The deal is subject to acceptance by the third member of Ms. Merkel’s governing coalition: the center-left Social Democratic Party, which has previously criticized the plans for their “mass-internment camps.” If they reject the deal, this could force Ms. Merkel to come up with an entirely different compromise option. Or it could collapse the government.

Here are four likely near-term outcomes, beyond the consequences for migrants and refugees caught in the camps:

(1) Possible end of Europe’s open-borders era. Austrian leaders are now talking about securing their own “southern borders,” and others are likely to follow, using the German deal as a fig leaf. (Ms. Merkel can hardly chastise them for following her example.) Border-free travel within the union, which has been the rule not the exception, could become the exception and not the rule. In other words, it could end in all but name.

(2) Racial profiling at European borders. Unless German authorities set up mandatory border checkpoints at every rail and road crossing with Austria — a huge undertaking — they’ll need to screen selectively. In other words, there will most likely be racial profiling, in which white people get to freely cross borders but others face higher odds of being stopped.

(3) A hard-right political shift. Ms. Merkel will help make nativism, which she has long opposed, an establishment position. The Social Democrats stand to lose out significantly, further eroding Germany’s center left. If they oppose the deal, they could prompt new elections, in which polls suggest they will lose badly. If they accept a deal that supposedly goes against everything they stand for, they will demonstrate their own irrelevance.

(4) Victory for the nativists. Germany’s far-right party, Alternative for Germany, might not be in power, but this deal would demonstrate the nativists’ influence on policy. They have driven the conversation and are taking full credit for the deal. It might not be the last time.

Why is this such a big deal?

There are real concerns that this could set off a cascading series of events that significantly degrade, and maybe even break, European unity.

Many European leaders are less secure in their governing than Ms. Merkel is, and face even larger right-wing nativist backlashes. They go along with open borders because they have to. If Ms. Merkel gives up on open borders, she will open the way for others to follow.

Countries that share borders with Germany, particularly Austria, might even feel pressured to mimic this sort of border closing. Otherwise, their countries could turn into holding grounds for secondary migrants trying to reach Germany, where many have family members.

It’s about more than borders. Ms. Merkel’s compromise plan would work through bilateral deals between Germany and other European countries — rather than through big, multilateral agreements, which is how the union is supposed to work. That would further chip away at the union.

Then there is the symbolism. This would bring Ms. Merkel’s Germany — the ideological anchor of the European experiment, maybe of the entire liberal Western order — into sync with Viktor Orban’s Hungary, which is seen as representing the forces of nativism, nationalism and democratic backsliding. Mr. Orban, the Hungarian prime minister, drew global condemnation last year when he set up camps much like those Ms. Merkel is proposing. She has even borrowed his term: “transit centers.”

Is this the end of Ms. Merkel? Of the European experiment?

It’s too soon to say, but it remains a possibility. Even if this particular deal doesn’t go through, recent events show that Ms. Merkel’s hold over her coalition — much less the European order — could be getting shakier.

Another interpretation is that Ms. Merkel has shown just enough flexibility to keep her political partners bought in and the European experiment going. Maybe this will be seen as a one-time twist of a political release valve.

Any reporter who has covered Europe in the last decade has written a dozen articles or more about how one crisis or another has exposed the fundamental unsustainability of the European Union.

You could see that as an indication that the union will inevitably collapse, either formally or in a gradual devolution. And any such scenario usually includes Ms. Merkel leaving power.

Or you could see these nonstop warnings as reasons to shrug off the latest round. If the predictions of doom have been consistently wrong for a decade — remember the euro crisis? — then it’s reasonable to suspect they’re wrong again now.

Still, at the heart of this week’s drama is an irreconcilable contradiction: between calls for keeping out secondary migrants and demands to keep internal European borders open. It’s a version of the contradiction within the European Union itself: between an open union and a collection of sovereign states.

Reconciling irreconcilable contradictions has been Ms. Merkel’s unofficial job description for years. And maybe this deal is enough to do it again.

Maybe it will keep borders open enough that the European Union as we know it basically survives, but closes them enough to quiet right-wing nativist sentiment. Or maybe Ms. Merkel has sacrificed something crucial — perhaps for good — for the sake of briefly forestalling her coalition’s inevitable collapse.

If Ms. Merkel can paper over that contradiction, then the rest of Europe might do so as well, at least for now. If she fails, either by giving up on open borders or by abandoning her shaky centrist coalition, then she will give up on something crucial for her vision of a stable, centrist Germany, and there, too, Europe might follow. But either way, the contradiction will remain, waiting to come back.