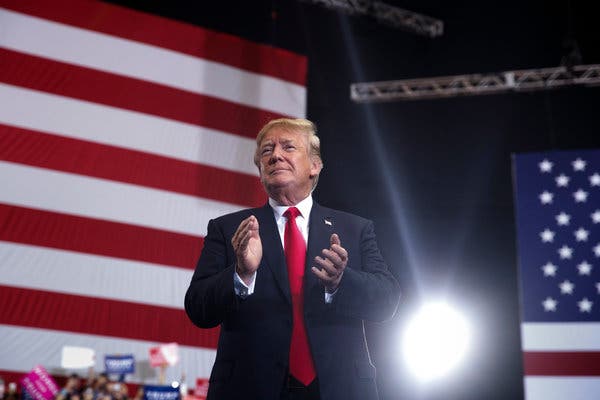 "WASHINGTON — President Trump, ramping up his assertions of extraordinary powers, declared in a tweet on Monday that he had “the absolute right” to pardon himself for any crime.

While no president has ever purported to pardon himself, and it is not clear whether Mr. Trump could legitimately take such a step, the president’s claim was the latest in an aggressive series of moves to assert his control over federal law enforcement.

Last month, Mr. Trump crossed a traditional line by ordering an investigation into the Russia investigators. And late last year he boasted he has “an absolute right to do what I want to with the Justice Department.”

The president has had help in shaping his expansive view of his authority: For at least a year, his lawyers in the investigation into whether he tried to obstruct the Russia inquiry have been advising the president that he wields sweeping constitutional powers to impede investigations no matter his motive — and despite obstruction-of-justice laws that everyone else must obey.

He has unfettered authority to fire the F.B.I. director, which he did last year; to order a federal investigation opened or closed; and to pardon anyone, including felons or criminal suspects, his longtime personal lawyer Marc E. Kasowitz said in a confidential memo last June. “The president cannot obstruct himself or subordinates acting on his behalf by simply exercising these inherent constitutional powers,” he wrote.

Many legal scholars have derided such claims as going too far, although no Supreme Court precedents offer definitive guideposts about whether Congress can make it illegal for a president to use his powers to supervise the Justice Department in a corrupt way.

“We overthrew control by a monarchy, and the Constitution signals in multiple places that the president is subject to law,” said Peter Shane, an Ohio State University law professor and co-author of a separation-of-powers casebook.

Mr. Kasowitz made his case in a letter to the special counsel, Robert S. Mueller III, and it was endorsed by two of the president’s other personal lawyers, John M. Dowd and Jay A. Sekulow, who incorporated his arguments in their own letter to Mr. Mueller in January. Both letters, published over the weekend by The New York Times, offered an array of factual and legal arguments for why Mr. Trump has not violated obstruction laws and need not answer questions from Mr. Mueller.

But their striking constitutional claim that obstruction statutes cannot bind Mr. Trump stood apart from the rest of their case.

The idea that presidents, by virtue of their unique constitutional powers, are above ordinary law has surfaced from the White House before. Defenders of the Reagan administration made the claim during the Iran-contra affair, and lawyers in the George W. Bush administration wrote memos blessing torture and warrantless wiretapping programs. As Richard M. Nixon claimed after the Watergate scandal: “When the president does it, that means that it is not illegal.”

But the Trump team’s claim that obstruction-of-justice statutes do not apply to the president carries new twists.

For one thing, such disputes have tended to arise in the context of a president, in his role as commander in chief, pushing legal limits to defend the country from foreign threats. Even the Nixon administration rationalized surveillance of domestic political opponents, including antiwar and civil rights leaders, by citing worries about potential covert Soviet subversion.

Mr. Trump’s lawyers, by contrast, are claiming that he is “the chief law enforcement officer” — a description usually applied to the attorney general — wielding absolute power to command the actions of every federal prosecutor or F.B.I. agent in a way no congressional statute can limit. And he is doing so in the context of an investigation aimed at uncovering the scope of a foreign power’s covert meddling with American democracy — and whether he personally obstructed that inquiry.

The implications of Mr. Trump’s claim also go beyond the context of his lawyers defending him in a criminal case. If obstruction statutes cannot stop Mr. Trump from shutting down an investigation even if he did so with a corrupt motive, then Justice Department procedures and regulations also cannot stop him from ordering an investigation into his political opponents for corrupt reasons.

Those factors make the Trump lawyers’ claims different from assertions by previous presidents that the White House can lawfully bypass important statutes, said David Kris, a former senior Justice Department national security official during the Bush and Obama administrations who is a co-founder of the consulting firm Culper Partners.

“Trump is doing this not for national security reasons but to impede an investigation into himself and his associates, and he’s staking a far more sweeping claim to power than even other presidents by saying he can use the Justice Department for whatever he wants,” Mr. Kris said.

He added: “They are saying not just that the president is above the law, but in effect that he is the law — that he is the personification of justice and cannot obstruct himself. That is very stark and not very persuasive.”

The constitutional theory Mr. Trump’s team has put forward is not his first line of defense. They also have mustered factual claims, denying wrongdoing and arguing that as a technical matter, a particular obstruction statute did not apply to his actions. (The memo, however, appeared to be focused on the wrong statute, rendering the statutory arguments beside the point.)

But the Trump team is invoking its aggressive constitutional theory to backstop its other arguments. Even though Congress has made it a crime to impede a pending or potential grand-jury investigation or trial with corrupt intentions, they said, that statute cannot be applied to Mr. Trump, no matter what the evidence shows about his actions and intentions.

Both Nixon and President Bill Clinton were accused of obstruction of justice by lawmakers as part of impeachment proceedings, drawing on evidence brought to light by prosecutors who, rather than charging them with crimes, sent reports to the House Judiciary Committee for impeachment consideration. But the actions those presidents were accused of — like witness tampering or suborning perjury — were not an exercise of their official powers as president.

The novel issue raised by the investigation into Mr. Trump — assuming Mr. Mueller has not uncovered evidence of other obstructive actions that is not yet public — is whether Congress can make it a crime for him to use his power over the law enforcement system with a corrupt purpose, even if it would otherwise be lawful for him to take such steps.

“Put simply,” Mr. Kasowitz wrote last June, “the Constitution leaves no question that the president has exclusive authority over the ultimate conduct and disposition of all criminal investigations and over those executive branch officials responsible for conducting those investigations.”

No Supreme Court precedent exists that directly addresses the questions of how far Mr. Trump’s constitutional authority extends to supervise the Justice Department, or whether, if he did corruptly exercise that power, the statutes that make obstruction of justice a crime apply to him. Presidents and Congress routinely jostle over where to draw the line between their respective and often overlapping powers, but the Supreme Court rarely gets involved in adjudicating such questions.

Still, the court has ruled that Congress can impose some restrictions on a president’s power to control the executive branch, including by upholding statutes that prevent him from firing certain officials, including certain prosecutors, without good cause. On the other hand, Congress clearly signaled that it intended for those statutes to apply to presidents, while the obstruction statute is a general law.

While Britain’s kings traditionally wielded a prerogative power to suspend or dispense with laws, the framers of the Constitution required the American president to faithfully execute them, Mr. Shane noted. Though what that means can sometimes be blurry, he said, the Trump claim struck him as dubiously broad.

“The idea that the president could — regardless of his motive — just work his will on the investigation of civil or criminal offenses, that the Constitution frees him to act with corrupt motives, is just an affront to the idea of the president as a public trustee and subject to law.”

Trump and His Lawyers Embrace a Vision of Vast Executive Power - The New York Times
Posted by John H Armwood II at 11:58 AM