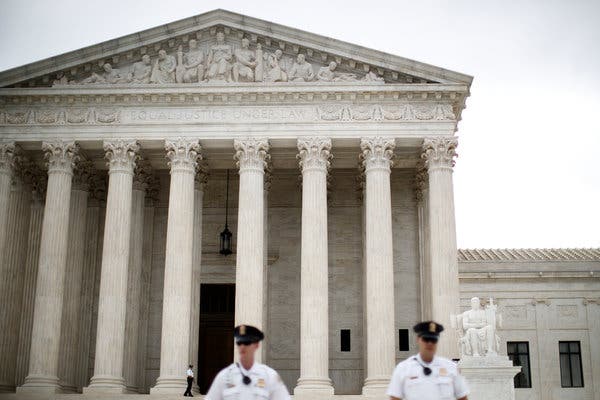 "The question for the justices was whether prosecutors violated the Fourth Amendment, which bars unreasonable searches, by collecting vast amounts of data from cellphone companies showing Mr. Carpenter’s movements.

In a pair of recent decisions, the Supreme Court expressed discomfort with allowing unlimited government access to digital data. It limited the ability of the police to use GPS devices to track suspects’ movements, and it required a warrant to search cellphones.

Technology companies including Apple, Facebook and Google filed a brief urging the Supreme Court to continue to bring Fourth Amendment law into the modern era. ‘No constitutional doctrine should presume,’ the brief said, ‘that consumers assume the risk of warrantless government surveillance simply by using technologies that are beneficial and increasingly integrated into modern life.’

Older Supreme Court decisions offered little protection for information about businesses’ customers. In 1979, for instance, in Smith v. Maryland, the Supreme Court ruled that a robbery suspect had no reasonable expectation that his right to privacy extended to the numbers dialed from his landline phone. The court reasoned that the suspect had voluntarily turned over that information to a third party: the phone company.

A federal law, the Stored Communications Act, does require prosecutors to go to court to obtain tracking data, but the showing they must make under the law is not probable cause, the standard for a warrant. Instead, they must demonstrate only that there were ‘specific and articulable facts showing that there are reasonable grounds to believe’ that the records sought ‘are relevant and material to an ongoing criminal investigation.’

The court’s decision in the case, Carpenter v. United States, No. 16-402, applied the Fourth Amendment, drafted in the 18th century, to a world in which people’s movements are continually recorded by devices in their pockets and cars, by toll plazas and by transit systems.