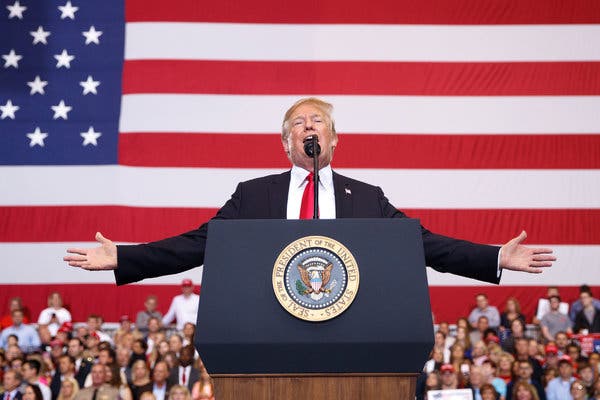 "In one way, Donald Trump’s presidency has been a raging success: He stole a political party.

Among most of the people who we used to call Republicans, among the people who like Trump or at least loathe the things that Trump loathes, Trump is not a disappointment but a deity.

As the former House speaker, John Boehner, said Thursday at a political event in Michigan: “There is no Republican Party. There’s a Trump party. The Republican Party is kind of taking a nap somewhere.”

No sir, the Republican Party as you knew it — and I knew it — is in a Trump-induced coma. As Trump dragged down your party, Republican voters cheered, and your so-called leaders have cowered.

Congressmen have shielded and protected him, excused and accepted him. The party as a whole — or at least the vast majority of it — has turned its back on much of what it once held dear, and heretofore adhered to: a common sense of morality, ethics and norms or propriety.

To be clear, much of what Trump has surfaced among Republicans has always been there — sexism, racism, xenophobia, anti-immigrant hysteria — but Trump has elevated it, venerated it, and branded it. This is the Trumpublican Party, a party reborn in Trump’s own image, one existing to worship him with blind allegiance and follow him with mindless obeisance.

Most of these people, in their misogyny and patriarchy (including the majority of white women voters in America who voted for Trump in 2016) — don’t see a problem with the way Trump treats women. An April Quinnipiac University poll found that two-thirds of Republicans believe that “Trump treats women with the same amount of respect as he treats men.”

Furthermore, a YouGov poll from the end of April found that while a majority of Trump voters believe that a woman would probably be elected president during their lifetimes, a majority hoped it wouldn’t happen. Trump has attacked people who are black (protesting athletes, immigrants from African countries, President Obama) and brown (Mexicans, Muslims, immigrants coming north) and the Trumpublicans have cheered.

Trump has defended Nazis and has been slow and tentative about criticizing racists. He has invited flaming racist Ted Nugent to the White House. Nugent has called President Obama a piece of human excrement, referred to Jesse Jackson and Al Sharpton’s speech in a column as “lisping their ebonic mumbo-jumbo,” and wrote in another column, “I’m beginning to wonder if it would have been best had the South won the Civil War.”

Trump has pardoned Sheriff Joe Arpaio, who ordered the systematic racial profiling of Latino communities. As the A.C.L.U. put it: “In traffic stops, workplace raids and neighborhood sweeps, Arpaio ordered deputies to target residents solely based on their ethnicity, often detaining people without reasonable suspicion that they were violating any laws that his office was allowed to enforce.”

And last week Trump pardoned racist Dinesh D’Souza, who as Slate put it, “has trafficked in racism and homophobia for nearly 30 years, stretching back to his time at Dartmouth in the early years of the Reagan administration, where he edited the right-wing Dartmouth Review. Among other things, he ran an anti-affirmative action article written in a caricature of black vernacular English (titled “Dis Sho Ain’t No Jive, Bro”)…”

And yet, the same April Quinnipiac poll found that an overwhelming 82 percent of Republicans believe Trump treats people of color with the same amount of respect as he treats white people.

These people were already detached from reality, but Trump helped them to see a new reality, one in which their hatred and bigotry were not abhorrent, but rather markers of the mainstream. They didn’t have a problem, the rest of America was the problem.

It is only in that alternate reality, in that other world, that Gallup could report poll results last week that found that three-quarters of Republicans believe that Trump provides strong moral leadership as president.

These are the same Republicans who told Gallup last month that they thought that the ethical standards of the thoroughly unethical Trump administration officials were excellent or good (71 percent) as opposed to not good or poor (27 percent).

I will not say that the pre-Trump Republican Party is dead, because anything can happen in politics, but I will most definitely say that it is grievously ill, on life support and Trump is standing over the motionless body with the power cord in his hand.

For conquering and crippling the Republican Party, Trump will be long remembered, but probably not in the way his supporters hope. I believe he is leading them to ruin."