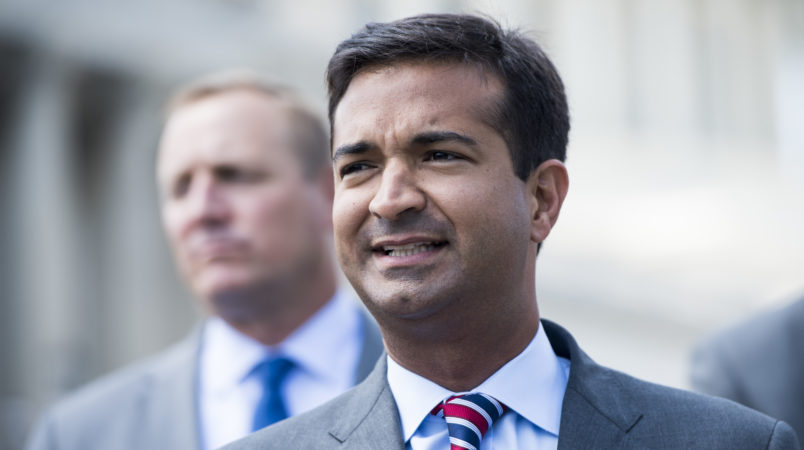 "A group of GOP lawmakers, led by a trio of swing-district Republicans facing tough reelection battles, are just three signatures away from being able to force a vote on the House floor on a bill that would give the group dubbed “DREAMers” a path to citizenship by joining with Democratic lawmakers. They’ve guaranteed they have those signatures, and have held off on pushing through the so-called discharge petition to allow time to negotiate with Republican leaders and GOP hardliners over a compromise bill.

But their deadline has arrived: If the group wants to force a vote by June 25, likely the last possible time for serious legislation this year, they must produce those final three signatures on Tuesday. In other words, it’s put up or shut up time.

“Today is really the deal-breaker,” one source close to the moderate faction told TPM Tuesday.

House GOP leaders have worked aggressively to short-circuit their efforts, however, cajoling wavering members not yet on the bill and working them hard with possible offers. According to Politico, that’s swayed at least one member thought to be a likely future signee, retiring Rep. Dennis Ross (R-FL), away from joining his more moderate colleagues on the discharge petition.

The signers of the petition clearly see today as a make-or-break. But the people they’re counting on to get the negotiations across the finish line may not — and more could be picked off by GOP leaders with other promises and pleas for more time to hammer out a deal, in effect killing the efforts.

The group of mostly moderate and retiring members has moved its deadline demands before. But if they can’t get things done today, the effort is likely all but dead this summer, as Congress has limited floor time to get things done this year, and even if they manage to pass something they’d need the even-slower Senate to sign on and President Trump to agree, something he’s said he’s not on board with.

There are signs that things may slip further, an outcome that could all but doom the efforts. A source with the moderates familiar with the negotiations said a late afternoon meeting in House Speaker Paul Ryan’s (R-WI) office between the different factions would likely determine whether or not the remaining possible signees are fed up enough with a lack of progress to join the bill — or whether they decide to give leaders more time, a move that would further endanger the group’s efforts to force a vote to help the young undocumented immigrants.

“The signers are still possible today and if not this might get pushed until the July 23 discharge date,” said the source close to the moderates. “It’s still fifty-fifty… It’s going to depend on the outcome of the meeting today.”

If that happens, it’s even less realistic that this effort could prove fruitful — it would give the House just days to get things done before their August recess, and make it unlikely the Senate will act, as they’ve already got a packed August calendar that many senators hope will be shortened so they can return home.

That means this effort may be as much of a show vote to help vulnerable Republicans ahead of a brutal 2018 election than a real push to protect DREAMers.

The group is being led by three swing-district Republicans with moderate views on immigration who usually get along well with party leadership: Reps. Carlos Curbelo (R-FL), Jeff Denham (R-CA) and Will Hurd (R-TX). And plenty of other Republicans facing tough election fights who usually fall in line behind GOP leaders are on board as well.

Just one Democrat is a hold-out at this point, Rep. Henry Cuellar (D-TX), but he’s said he’d join the petition if Republicans can find two more votes. Another potential target is Rep. Dan Newhouse (R-WA), and Rep. Joe Barton (R-TX) hasn’t ruled out joining the petition. But with Ross gone it’s unclear who the final Republicans to push things across the finish line might be.

Denham told TPM last Thursday that this Tuesday was the drop-dead date that they’d wait for legislative text before defying GOP leaders and delivering 218 signatures, though the groups could keep negotiating afterwards. Because of arcane House rules, if they don’t get it done today the earliest they’d be able to force a House vote in the future would be the end of July, likely too late to get anything of substance passed through both houses of Congress (if it isn’t too late already).

But after some happy noise about a possible compromise that day, it became clear to both sides that they were further away from a deal than they’d initially thought.

Denham spokeswoman Jessica McFaul told TPM Monday afternoon that the group was “still working toward 218 signatures on the discharge [petition] while trying to work with Leadership and the Freedom Caucus on a compromise bill.”

If they don’t reach an agreement on Tuesday — and the day passes without 218 signatures on the discharge petition — the group’s efforts to force the issue in time for an actual legislative solution are as good as dead."