America's refusal to accept refugees of color has been a consistent, American policy, - REAGAN ORDERS ALIENS STOPPED ON THE HIGH SEA - The New York Times 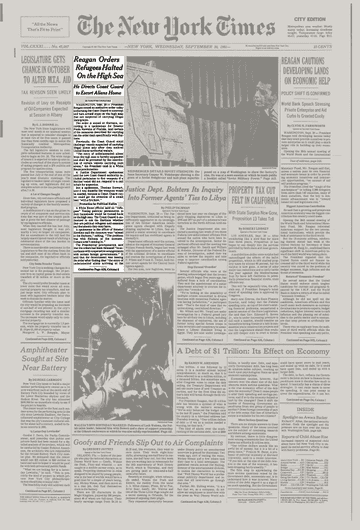 America's refusal to accept refugees of color has been a consistent, American policy,

"President Reagan issued an executive order today directing the Coast Guard for the first time to intercept and turn around ships on the high seas that are suspected of carrying illegal immigrants.

Although the order did not name any country, officials indicated that it was aimed at Haitians. ''It's an agreement worked out with Haiti and the U.S.,'' a White House spokesman said, explaining that the Coast Guard could previously challenge vessels suspected of carrying illegal aliens only after they entered United States territorial waters, not on the high seas.

Not Aimed at Cubans

A spokesman in the office of Senator Paula Hawkins, Republican of Florida, said the measure ''is aimed at the Haitians'' because ''Cubans aren't coming in.''

The President said in the White House proclamation: ''The entry of undocumented aliens from the high seas is hereby suspended and shall be prevented by the interdiction of certain vessels carrying such aliens.''

A Justice Department spokesman said the new Coast Guard authority included permission to fire weapons if a Haitian vessel did not respond to a call to halt for inspection. But a spokesman, Thomas Stewart, said it was doubtful the weapons would be needed.

A White House official said no ''refugees'' fleeing political persecution in their homelands would be turned back on the high seas. The Coast Guard is directed by the President's order to ask the Haitians whether they are political refugees and examine any documents they may have. Details to Come Later

A State Department spokesman was unable to identify what type of document a refugee could give the Coast Guard to establish that he was fleeing the country for political reasons. He said a news briefing was scheduled tomorrow to explain details of the order.

The Presidential proclamation said that the orders had been released ''in accordance with cooperative arrangements with certain foreign governments.'' It said that the Government was issuing the order after finding that ''the entry of undocumented aliens arriving at the borders of the United States from the high seas is detrimental to the interests of the United States.''

White House and Justice Department officials have been negotiating for months with the Haitian Government to curb the flow of illegal immigrants into Florida.

Mr. Stewart said at the Justice Department hearing that one Coast Guard cutter would be stationed near Haiti at all times. Two Immigration officers will be on board, along with two interpreters who can speak the Haitian Creole dialect. Most Said to Want Jobs

''We have discovered by talking to thousands of Haitians that they are very frank in saying they want to come to the U.S. to get a job,'' Mr. Stewart said. ''It's a very rare one who says he's coming because he wants to escape the Government of Haiti.''