A New York election: the battle to prove who's the Trumpiest of them all | US news | The Guardian 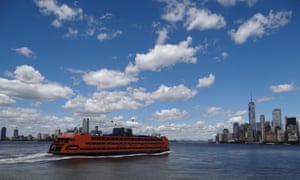 Home is where the hatred is. --Gil Scott Heron

"New York spawned Donald Trump, but since his rise to the presidency, the city has come to feel like an independent state, a world away from the obsessions of the man in the Oval Office.

But cross a bridge from hipster Brooklyn or take a free ferry ride from the toe of Manhattan and Trumpland is right there on the doorstep.

Staten Island, the forgotten fifth borough, overlooked by tourists and ignored by most New Yorkers, is a conservative stronghold. Traditionally home to cops and firefighters, Irish and Italians, it voted heavily for Trump in 2016 and will have its say on Tuesday in a Republican primary which can make undisputed claim to be the Trumpiest race of the 2018 midterms.

Michael Grimm and Dan Donovan at an election debate. Photograph: David Taylor for the Guardian

In one corner is Dan Donovan, a sitting congressman who has fallen so perfectly into line with the Trump agenda that he has won the president’s “full endorsement” on Twitter. His campaign signs, popping up on lawns along the 14-mile length of the borough, have been updated with the Trump line, almost as if they are running mates.

In nearby Long Island in May, Donovan joined Trump on Air Force One for a strange presidential fact-finding field trip meant to highlight violence involving the MS-13 gang. He further ingratiated himself by introducing a bill which would order all post offices to display a picture of Trump. Days later, his endorsement arrived.

But Donovan is not sure thing for re-election. His opponent is Michael Grimm, a man formerly known to the US federal prison system as inmate 83479-053.

The former marine and FBI undercover agent has already served as representative for New York’s 11th congressional district, which covers Staten Island and the southern end of Brooklyn. But his last term ended in disgrace after he pleaded guilty in 2015 to aiding and assisting the preparation of a false tax return.

He served seven months in prison, after admitting hiring undocumented migrants and hiding $1m in receipts from a now defunct Manhattan restaurant, Healthalicious.

Grimm also gained notoriety during his time in Washington when he was caught on camera threatening to throw a television reporter off a balcony inside the Capitol building. “I will break you in half, like a boy,” he threatened, after taking exception to being ambushed with a question about his campaign finances.

Now Grimm is back, emboldened by the support of former White House aide Steve Bannon and determined to prove, endorsement or not, that he is the true ally to Trump.

For a man attempting a dramatic political makeover, Grimm has picked a perfect location. His campaign headquarters in a mall on Hylan Boulevard is sandwiched between a Beach Bum Tanning salon and the European Wax Center, where “our experts will have you walking in and strutting out”.

Inside, volunteers are busy in a windowless basement office, with only a few days to go until the vote to decide which Republican will defend the district in November. A campaign T-shirt with the logo “Michael Grimm 2018 All Aboard The Trump Train” is pinned to the wall alongside a glittery red, white and blue God Bless America. At a desk below, four women are hitting the phones.

Volunteers hit the phones for Grimm at his campaign headquarters. Photograph: David Taylor for the Guardian

A volunteer, who gave her name as Maryann, said: “Some people say they like Donovan but covertly, once they are in that election booth, they say they are going to vote for Grimm.”

One poll from the end of May showed Grimm winning by 10 points. After the Trump endorsement, the latest poll gives Donovan a seven-point lead.

Grimm, who had a moderate record as a congressman in the age before Trump, seems to be reinventing himself, taking a hardline position on immigration, condemning the Mueller investigation into the Trump campaign’s possible collusion with Russia and decrying his opponent for voting to support the Affordable Care Act.

Despite his past misdemeanours, there is tremendous loyalty for Grimm in Staten Island. From Tottenville, a waterside neighbourhood where Main Street seems to have as many Italian and Irish flags as stars and stripes, to Midland Beach on its eastern Atlantic coast, locals remember what he did for them after superstorm Sandy hit in 2012, killing 24 people and bringing devastation.

Grimm was there serving food and helping with the clean up. Crucially, for people rebuilding their lives, he authored a bill to keep down the cost of flood insurance.

Veronica Petersen, a retired educator, was one of 12 volunteers making calls on behalf of Grimm on Thursday. She said she first met him after Sandy: “My house was gone. He came to my yard and offered his assistance – food, anything I needed. He’s a hands-on congressman, not an out-of-touch bureaucrat.”

Sitting alongside an image of a beaming Grimm with the slogan “He’s got our back!” she said: “I want a congressman who gets his hands dirty and represents us.”

In Tottenville, retired bus mechanic Joey Brunetti, 69, said: “This guy Donovan – first time I heard of him! I talked to Grimm, he’s a down to earth guy, means what he says. What I can say, he’s a stand-up guy.”

What about his record as a felon? “That’s bullshit. He just happened to get caught, most of them do it.”

Outside the LA Fitness gym where Grimm trains, Santo Curatolo, 49, said: “I knew him as someone in the gym. I was hitting the bag and he was next to me, then I saw his ad and said, ‘That guy from the gym is running for Congress’. He’s a regular guy, he’s a gentleman.”

Curatolo said he didn’t vote, but supported Trump: “He’s doing well, right? They say he is the best president ever, he’s making peace with other countries.”

On stage together at a nasty debate this month, Grimm, 48, and Donovan, 61, stood at lecterns inches apart and tore into one another.

Grimm claimed his opponent had offered to help him get a pardon from Trump, but went cold when he discovered he intended to run against him. He called Donovan an “alleged Republican”, condemned him for supporting Obamacare and said “he doesn’t believe in deporting people”.

Donovan, a former district attorney, shot back: “I was a prosecutor for 20 years, I put people like him in prison.”

Both men are falling over themselves to demonstrate their populist credentials and loyalty to Trump – and while many Republicans were critical of the policy of splitting children from their families at the border, both candidates last week staunchly defended Trump as the outcry grew.

Grimm even rejected concern over distressing audio of children in detention crying for their mothers, comparing the sound to any nursery when a child has been left behind. On Thursday, at a low-key press conference, he insisted he had no regrets over what he said, blaming a journalist instead for the framing of the question.

Trump is looming over the candidates, and with good reason: Staten Island’s commitment to the president is largely undimmed. Retired detective Lou Telano, president of the New York Veteran Police Association, said his organisation was the first to endorse Trump, so the president’s endorsement of Donovan was now an important factor.

Telano was also the real-life inspiration for Starsky, one half of television’s most famous cop double act, Starsky & Hutch. He said: “We like Grimm, I like him personally. Donovan was endorsed by Trump, so that puts us in a little predicament. We may stay neutral until the election ends.

“Some of the membership are saying we can’t support him because he’s got a prison record. So that goes back and forth. At this moment, I guess we’ll probably stay neutral. Right now, it looks like we’re gonna do Pontius Pilate.”

A New York election: the battle to prove who's the Trumpiest of them all | US news | The Guardian
Posted by John H Armwood II at 10:27 AM