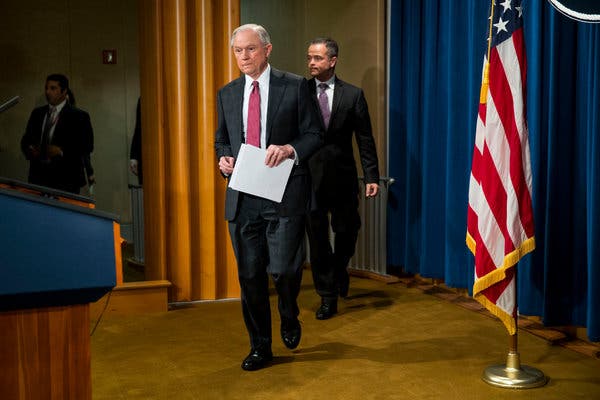 "WASHINGTON — By the time Attorney General Jeff Sessions arrived at President Trump’s Mar-a-Lago resort for dinner one Saturday evening in March 2017, he had been receiving the presidential silent treatment for two days. Mr. Sessions had flown to Florida because Mr. Trump was refusing to take his calls about a pressing decision on his travel ban.

When they met, Mr. Trump was ready to talk — but not about the travel ban. His grievance was with Mr. Sessions: The president objected to his decision to recuse himself from the Russia investigation. Mr. Trump, who had told aides that he needed a loyalist overseeing the inquiry, berated Mr. Sessions and told him he should reverse his decision, an unusual and potentially inappropriate request.

The confrontation, which has not been previously reported, is being investigated by the special counsel, Robert S. Mueller III, as are the president’s public and private attacks on Mr. Sessions and efforts to get him to resign. Mr. Trump dwelled on the recusal for months, according to confidants and current and former administration officials who described his behavior toward the attorney general.

The special counsel’s interest demonstrates Mr. Sessions’s overlooked role as a key witness in the investigation into whether Mr. Trump tried to obstruct the inquiry itself. It also suggests that the obstruction investigation is broader than it is widely understood to be — encompassing not only the president’s interactions with and firing of the former F.B.I. director, James B. Comey, but also his relationship with Mr. Sessions.