President Moon of The ROK has been and is now running this negotiation. North Korea Willing to Talk About ‘Complete Denuclearization’ - The New York Times 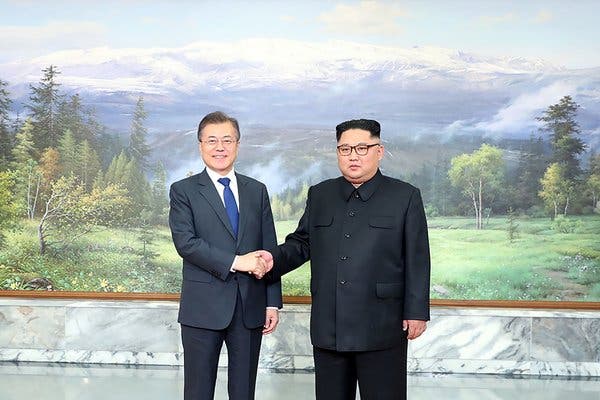 "SEOUL, South Korea — The leader of North Korea, Kim Jong-un, said during a surprise summit meeting that he is determined to meet President Trump and discuss a “complete denuclearization of the Korean Peninsula,” South Korean President Moon Jae-in said on Sunday.

Mr. Kim met unexpectedly with Mr. Moon on Saturday to discuss salvaging a canceled summit meeting between Mr. Kim and President Trump, a new twist in the whirlwind of diplomacy over the fate of the North’s nuclear arsenal. The leaders of the two Koreas met for two hours on the North Korean side of Panmunjom, a “truce village” inside the Demilitarized Zone that separates the two Koreas.

Mr. Moon gave the first details of Saturday’s meeting in a news conference held Sunday morning in Seoul, the South Korean capital. He said that during the meeting, Mr. Kim expressed a desire to “end a history of war and confrontation” on the peninsula. Mr. Kim also said he was willing to talk about getting rid of North Korea’s nuclear weapons, a topic the Trump administration has said was a precondition for a meeting.

Mr. Moon said that Mr. Kim told him he wanted to go though with his planned summit meeting with Mr. Trump, and to make it a success. The Trump-Kim meeting, which would be the first between the heads of state of the United States and North Korea, had been scheduled for June 12 in Singapore, but was abruptly canceled on Thursday by Mr. Trump."