Opinion | The Weasel of Oz - The New York Times 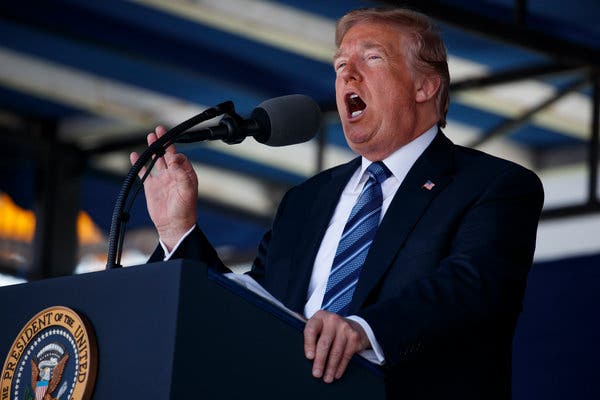 "Assuming that you have maintained the ability to be astonished by Donald Trump’s antics and insolence, The Washington Post reported last week that in 2017, before Trump was to deliver a speech to Congress, he “huddled with senior adviser Jared Kushner and [Stephen] Miller in the Oval Office to talk immigration.” As The Post reported:
“Trump reminded them the crowds loved his rhetoric on immigrants along the campaign trail. Acting as if he were at a rally, he recited a few made-up Hispanic names and described potential crimes they could have committed, such as rape or murder. Then, he said, the crowds would roar when the criminals were thrown out of the country — as they did when he highlighted crimes by illegal immigrants at his rallies, according to a person present for the exchange and another briefed on it later. Miller and Kushner laughed.”

That Trump is a racist and white supremacist is settled fact at this point.

After Charlottesville, and the “shithole countries” comment and the use of MS-13 — “These aren’t people. These are animals” — as a coded cudgel against all immigrants, if you still don’t believe that Trump is a racist — and most people do — then you’re not paying attention, are willfully ignorant, or are probably a closet racist yourself.

The racism has become almost routine. Now it is the continued revelations of the degree to which Trump takes the presidency as a giant game, in which he is all-powerful, in which supplicants must come pleading, in which he has an unmatched ability to retain power by manipulating and deceiving the populace.

Its like he’s playing the role of the Wizard of Oz, only this man is a weasel.

This isn’t even the first time that we’ve gotten a peek behind the curtain and have seen Trump’s hubris about his ability to tap into people’s anxieties — and hatreds — and his ability to bend reality to suit his designs.

It is the same way that he used “build the wall” as a rallying cry to keep supporters engaged and enraged. It is the way he seized on the N.F.L. protest issue, and recast it to his supporters — mostly white — as a them-against-us battle of unpatriotic ingratitude by the players — mostly black.

In a stunning acquiescence to Trump’s racial hostility, the N.F.L. last week ruled that its players on the field must stand for the national anthem or their teams could be fined. They can also remain in the locker room, out of view and protest there until the anthem is finished.

In other words, the players must make their pain more palatable by removing it from public consideration, to hide their light under a bush, to “eat in the kitchen when company comes,” as Langston Hughes wrote in his 1926 poem best known by its first line: “I, too, sing America.”

But Trump wasn’t satisfied to simply accept the win. He sought to milk the manipulation even more, suggesting to Brian Kilmeade of “Fox & Friends” that protesting players may even need to be deported. As Trump put it: “You have to stand proudly for the national anthem or you shouldn’t be playing, you shouldn’t be there — maybe they shouldn’t be in the country.”

Demonization of those who are different — in race, religion, ethnicity, sexual orientation or even conviction — is a common thread in Trump’s power play. He directs it at the media in a different way.

Last week, “60 Minutes” correspondent Lesley Stahl recalled an exchange she had with Trump in 2016 in which she pressed him on why he repeatedly insults journalists. His response, according to Stahl, was: “You know why I do it? I do it to discredit you all and demean you all so when you write negative stories about me, no one will believe you.”
For Trump, it’s all about manipulation, and he will lie, bully and demean to that end, even if his deceit is discovered.
On Saturday, Trump falsely claimed on Twitter:

“The Failing @nytimes quotes ‘a senior White House official,’ who doesn’t exist, as saying ‘even if the meeting were reinstated, holding it on June 12 would be impossible, given the lack of time and the amount of planning needed.’ WRONG AGAIN! Use real people, not phony sources.”

Well, it turns out that the official not only exists, but audio surfaced of him giving the briefing in the White House itself. And while he never uses the word “impossible,” he describes a timeline that sounds impossible.
Trump has not apologized for that lie or corrected it, and the tweet is still available on Twitter.

This is the strategy: Never apologize. Just move on, create a new moment — one that rivals or even outshines the last — and change the subject. This way, you keep your detractors playing on your court and by your rules and you never play on theirs.

In the film, the Wizard of Oz finally confesses: “I’m a humbug!” Trump never will."

Opinion | The Weasel of Oz - The New York Times