Opinion | Is the United States Losing Its Humanity? - The New York Times 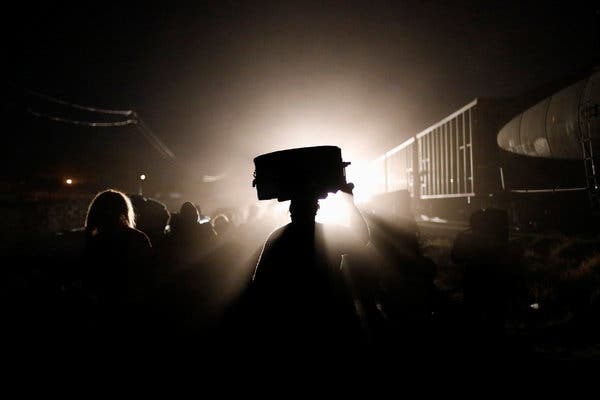 "President Trump is putting forward a nominee who is virulently anti-immigrant to be assistant secretary of state for the Bureau of Population, Refugees and Migration, a job I used to hold in the Obama administration. The nomination, announced last week, is only the latest move by the administration to chip away at our standing as the world’s top backer of humanitarian efforts.

The new nominee, Ronald Mortensen, has made his positions on immigration issues clear as a fellow of the Center for Immigration Studies. For example, he has insisted that most of the Dreamers — undocumented immigrants brought to the United States as children — have committed felonies. But his likely hostility to the mission of the bureau is not unique: the administration has named several immigration hard-liners to key posts. Rather, Mr. Mortensen’s nomination needs to be understood as part of a campaign to change America’s long tradition of welcoming refugees and immigrants and offering sanctuary to the persecuted.

President Trump’s anti-Muslim travel ban, announced shortly after his inauguration, was the first salvo in this campaign. Even with courts overturning various versions of the ban, the White House has succeeded in slashing the number of refugees admitted to the United States to the lowest level in years — from 85,000 in the last full year of the Obama administration to as few as 20,000 projected for this year.

The network of faith-based and secular charities around the United States that support refugee families to create new lives is disintegrating. With so few refugees being admitted, the State Department has announced plans to no longer fund some of these groups. The result is that fewer cities will be involved in the resettlement programs, the staff and volunteers who help refugees will disperse, and we will lose part of a highly successful public-private partnership. Lost, too, will be the proven economic and cultural benefits additional refugees would bring and the chance for a fresh start they desperately need.

While refugee aid delivered overseas through the United Nations High Commissioner for Refugees remains at robust levels, this is primarily because of bipartisan support in Congress. Other United Nations agencies, however, have been cut off. The White House stopped funding the United Nations Population Fund, saying it was involved in forced abortions and sterilizations, an assertion it denies. The agency plays an essential role in seeing to the reproductive health of displaced women and improving survival rates for mothers and babies, and in 2016, I celebrated when the 5,000th baby was born alive and healthy in its clinic in the Zaatri refugee camp in Jordan. The agency now reports there are 64,000 pregnant Rohingya in the squalor of refugee camps in Bangladesh who need help to deliver their babies safely.

The Trump administration also cut its funding of the United Nations agency that runs schools and provides health care to Palestinian refugees by more than 80 percent after Palestinians and United Nations member states criticized the decision to move the American Embassy in Israel to Jerusalem. The reduction has resulted in what a United Nations representative has called an “unprecedented financial crisis.” Left unclear is how punishing the poorest Palestinians helps an already tense situation.

Refugee aid addresses only the basic needs of most refugees, primarily food, water, sanitation and shelter. Convincing other countries to do more and resolving crises so that refugees can go home again requires diplomacy. Yet the Trump administration has weakened the State Department, demoralized our diplomats and threatened programs that foster growth overseas and work to preserve peace and stability. At a recent Brussels “pledging conference” for humanitarian aid for Syrians, the United States delegation, which once would have made a major announcement of aid and spurred others to give, did not deliver remarks.

As assistant secretary, I used to lead United States delegations to migration conferences to make the case that border crossers have the right to claim asylum, migrant laborers need protection from exploitation and abuse, and, in all cases, people should be treated humanely. Our country led in promoting good ideas. One example is the Migrants in Countries in Crisis initiative, which produced voluntary guidelines to follow when migrants are caught up in disasters far from home.

Now, the administration boycotts meetings on a voluntary global migration compact, making the nonsensical claim it would undermine American sovereignty. It also put forward a candidate to head the International Organization for Migration who has a record of tweeting anti-Muslim sentiments.

At the same time, the anti-immigrant Trump policy adviser Stephen Miller is leading a team in the White House and the Department of Homeland Security that is driving policies that are anything but humanitarian. Separating migrant children from parents at the border, as happened last November when a Congolese asylum seeker in California saw her 7-year-old daughter taken away, is only the latest cruel measure announced.

The list of good moves on the part of the Trump administration is very short indeed. It’s kept the deal I signed with Australia for the U.S. to accept refugees who were isolated in Manus Island and Nauru. It supports an arrangement the Obama administration set up with Costa Rica to keep refugees in imminent peril safe until they can be resettled, and it supports a new regional framework that several Latin American countries are developing to help refugees. By all accounts Trump nominees to head Unicef and the World Food Program are capable and experienced.

Unfortunately the negatives vastly outweigh the positives. By ignoring the urgent needs of refugees and immigrants within and outside its borders, the Trump administration is setting bad examples and deconstructing a humanitarian approach that was admired by, and depended on, by millions of people throughout the world.

Anne C. Richard, a fellow at Georgetown University, was the assistant secretary of state for population, refugees and migration from 2012 to 2017."

Opinion | Is the United States Losing Its Humanity? - The New York Times
Posted by John H Armwood II at 1:19 PM