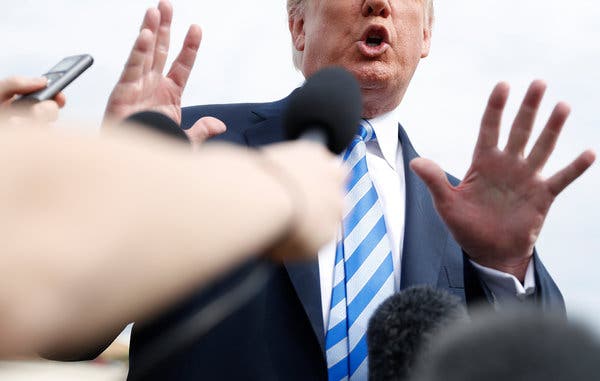 "There has been no shortage of analysis of Donald Trump’s rhetorical tics, the way he overuses particular phrases, the way he falls back on others. The way he lies. The way he threatens, bullies and whines with language.

All of these observations are at different points hilarious or infuriating, abundantly silly or deadly serious.

But there is a strand of these that I find significant: the way Trump’s use of indeterminate language is a way of weakening the fundamental supports of truth itself. Truth is absolute. Things happened or they didn’t, at a particular time. They can be counted and accounted for.

But not the way Trump constructs language. It is not just his outright lies that degrade our discourse; it is also his use of language that muddles to the point of meaninglessness, language that rejects exactitude, language that elevates imprecision as a device to avoid being discovered in his deceit.

He uses this language to give a false impression that he knows that which he clearly doesn’t, to blame or to bolster, to pretend that he has developed a plan of action rather than admit that he is acting extemporaneously.

It all fits into the illusion of competence Trump has built for himself, a fake it-is-how-you-make-it philosophy of advancement in which being studious is for stooges, a world in which passionate vocalization, even of gibberish, is far more valuable than knowledgeable elucidation of fact.

For instance, Trump often speaks of time in immeasurable increments.

Things are going to happen in a “period of time,” a short period or a long one or whatever.

According to the website Factbase, Trump has used the “period of time” construction over 80 times in public statements this year alone.

As The New York Times’s Upshot pointed out in September, he often says things “will happen ‘soon,’ ‘very soon,’ ‘very, very soon,’ ‘in the coming weeks’ or even “immediately.’” All of this is meaningless.

In June, Bloomberg pointed out that when Trump attempts precise timing, he defaults to a perfunctory “two weeks.” As Bloomberg put it: “From overhauling the tax code to releasing an infrastructure package to making decisions on Nafta and the Paris climate agreement, Trump has a common refrain: A big announcement is coming in just ‘two weeks.’ It rarely does.”

The Upshot found that “among more than 100 specific policy predictions Mr. Trump said would happen soon, we found that at least 75 percent of the time, they did not — or had not, as of this writing.”

This imprecision is simply another way to lie.

Another favored phrase of Trump’s is “we’ll see what happens,” which he has used in reference to China, North Korea, Iran and Mexico. “We’ll see what happens” is a dodge, not strategy or policy, but for Trump it suggests that he has something clever up his sleeve. He doesn’t.

He uses imprecise language as a means of hyperbole, to enlarge an action beyond itself and attach it to other, enigmatic actions.

For instance, Trump has a tendency to tack the phrase “and many other things” onto declarative statements. It is a form of political grade inflation. The same can be said for his liberal use of the phrase “like we’ve never seen before” when touting his achievements.

He uses imprecision as a way of making statements in which he parrots unknown and possibly nonexistent sourcing — ironically, the very thing that this projectionist accuses the “fake news” of doing.

He does this by couching wild accusations and conspiracy theories with the phrase “people are saying.” Which people? Names, please. And, how many do these “people” number? Again, this is uncheckable phrasing. With nearly 330 million people in America and seven billion on the planet, it would be hard to find a thing that some people are not saying, so in a way, you could say pretty much anything and safely bet that some other people are saying the same thing in some form.

Trump sometimes strings these phrases together in whole passages that suggest a certitude that is clearly absent.

This habit stretches all the way back to the campaign. At a 2015 campaign event, when a man said, “We have a problem in this country: It’s called ‘Muslim,’” and continued by saying, “You know our current president is one,” and then asked when “we” could “get rid of” the “training camps growing, where they want to kill us,” Trump didn’t object or correct that man, but instead responded:

This is a Rorschach test of rhetoric, where meaning splits from emotion. The answer itself is a string of meaningless, immeasurable, unenumerated pledges and accusations held together by spit and hostility. It is instead the emotion that registers. He abhors Muslims as much as the questioner and wants to reassure the questioner of such.

Trump not only uses language to tell blatant lies, he also uses it to pack softer lies, exaggerations and enigmatic inaccuracies around the edges.

If you, like I, have a hard time listening to Trump speak, it may well be that you are trying to do so while applying accepted standards of honest discourse, believing that Trump’s language can withstand even the mildest unpacking.

It can’t. Trump uses language not to divulge but to disguise, distract and deceive. Or at least that’s what people are saying."